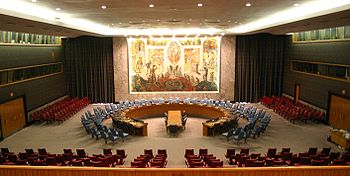 The chamber of the United Nations Security Council

Power in international relations is defined in several different ways. Modern discourse generally speaks in terms of state power, indicating both economic and military power. Those states that have significant amounts of power within the international system are referred to as middle powers, regional powers, great powers, superpowers, or hegemons, although there is no commonly accepted standard for what defines a powerful state. The G7, the BRIC nations and the G20 are seen as forum of governments that exercise varying degrees of influence within the international system.

Power as a goal

Primary usage of "power" as a goal in international relations belongs to political theorists, such as Niccolò Machiavelli and Hans Morgenthau.[2] Especially among Classical Realist thinkers, power is an inherent goal of mankind and of states. Economic growth, military growth, cultural spread etc. can all be considered as working towards the ultimate goal of international power. The German military thinker Carl von Clausewitz[3] is considered to be the quintessential projection of European growth across the continent. In more modern times, Claus Moser has elucidated theories centre of distribution of power in Europe after the Holocaust, and the power of universal learning as its counterpoint.[4] Jean Monnet[5] was a French left-wing social theorist, stimulating expansive Eurocommunism, who followed on the creator of modern European community, the diplomat and statesman Robert Schuman.[6] 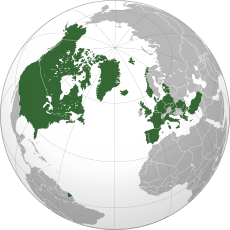 Political scientists principally use "power" in terms of an actor's ability to exercise influence over other actors within the international system. This influence can be coercive, attractive, cooperative, or competitive. Mechanisms of influence can include the threat or use of force, economic interaction or pressure, diplomacy, and cultural exchange.

Under certain circumstances, states can organize a sphere of influence or a bloc within which they exercise predominant influence. Historical examples include the spheres of influence recognized under the Concert of Europe, or the recognition of spheres during the Cold War following the Yalta Conference. The Warsaw Pact, the "Free World", and the Non-Aligned Movement were the blocs that arose out of the Cold War contest. Military alliances like NATO and the Warsaw Pact are another forum through which influence is exercised. However, "realist" theory attempted to maintain the balance of power from the development of meaningful diplomatic relations that can create a hegemony within the region. British foreign policy, for example, dominated Europe through the Congress of Vienna after the defeat of France. They continued the balancing act with the Congress of Berlin in 1878, to appease Russia and Germany from attacking Turkey. Britain has sided against the aggressors on the European continent—i.e. the German Empire, Nazi Germany, Napoleonic France or Habsburg Austria, known during the Great War as the Central Powers and, in the World War Two were called the Axis Powers.[9][10]

Power is also used when describing states or actors that have achieved military victories or security for their state in the international system. This general usage is most commonly found among the writings of historians or popular writers. For instance, a state that has achieved a string of combat victories in a military campaign against other states can be described as powerful. An actor that has succeeded in protecting its security, sovereignty, or strategic interests from repeated or significant challenge can also be described as powerful.[citation needed]

Power is the capacity to direct the decisions and actions of others. Power derives from strength and will. Strength comes from the transformation of resources into capabilities. Will infuses objectives with resolve. Strategy marshals capabilities and brings them to bear with precision. Statecraft seeks through strategy to magnify the mass, relevance, impact, and irresistibility of power. It guides the ways the state deploys and applies its power abroad. These ways embrace the arts of war, espionage, and diplomacy. The practitioners of these three arts are the paladins of statecraft.[11]

Power is also used to describe the resources and capabilities of a state. This definition is quantitative and is most often used by geopoliticians and the military. Capabilities are thought of in tangible terms—they are measurable, weighable, quantifiable assets. Thomas Hobbes spoke of power as "present means to obtain some future apparent good."[citation needed] Hard power can be treated as a potential and is not often enforced on the international stage.

Some scholars[12] have divided national capacities into three kinds:

Chinese strategists have such a concept of national power that can be measured quantitatively using an index known as comprehensive national power.

Much effort in academic and popular writing is devoted to deciding which countries have the status of "power", and how this can be measured. If a country has "power" (as influence) in military, diplomatic, cultural, and economic spheres, it might be called a "power" (as status). There are several categories of power, and inclusion of a state in one category or another is fraught with difficulty and controversy. In his famous 1987 work, The Rise and Fall of the Great Powers British-American historian Paul Kennedy charts the relative status of the various powers from AD 1500 to 2000. He does not begin the book with a theoretical definition of a "great power", however he does list them, separately, for many different eras. As well, he uses different working definitions of a great power for different era. For example:

"France was not strong enough to oppose Germany in a one-to-one struggle... If the mark of a Great Power is country which is willing to take on any other, then France (like Austria-Hungary) had slipped to a lower position. But that definition seemed too abstract in 1914 to a nation geared up for war, militarily stronger than ever, wealthy, and, above all, endowed with powerful allies."[20]

In the modern geopolitical landscape, a number of terms are used to describe various types of powers, which include the following:

Some political scientists distinguish between two types of power: Hard and Soft. The former is coercive while the latter is attractive.

Hard power refers to coercive tactics: the threat or use of armed forces, economic pressure or sanctions, assassination and subterfuge, or other forms of intimidation. Hard power is generally associated to the stronger of nations, as the ability to change the domestic affairs of other nations through military threats. Realists and neorealists, such as John Mearsheimer, are advocates of the use of such power for the balancing of the international system.

Joseph Nye is the leading proponent and theorist of soft power. Instruments of soft power include debates on cultural values, dialogues on ideology, the attempt to influence through good example, and the appeal to commonly accepted human values. Means of exercising soft power include diplomacy, dissemination of information, analysis, propaganda, and cultural programming to achieve political ends.

Others have synthesized soft and hard power, including through the field of smart power. This is often a call to use a holistic spectrum of statecraft tools, ranging from soft to hard.

European powers of the modern age

During the time of the Renaissance, powers in Europe included Spain, England, France, the Habsburg Empire, Poland-Lithuania and the Ottoman Empire. Bolstered by shipments of gold and silver from the Americas, the Spanish Habsburg dynasty emerged as a dominant force and regularly launched military interventions to project its power and defend Catholicism, while its rival, France, was torn apart by religious civil war. Meanwhile, in Eastern Europe, the Ottoman Empire reached its zenith and completed its conquest of the Balkan region.

During the 17th century the Netherlands and Sweden were added to the group, whilst the Ottomans, Poland and Spain gradually declined in power and influence. France progressively grew stronger and by the latter part of the century found itself repeatedly facing alliances designed to hold its military power in check.

In the 18th century, Great Britain (formed from a union of England and Scotland) progressively gained strength and Russia and Prussia also saw their importance increase, while Sweden and the Dutch Republic declined. Great Britain and France increasingly struggled for dominance both on the continent and abroad (notably in North America, the Caribbean and India). By the century's end, the British had established themselves as the foremost naval power while the French were dominant on land, conquering many of their neighbors during the French Revolutionary Wars and establishing client republics. The struggle between the two nations ended only in 1815 with the final defeat of the French under Napoleon.

During the 19th century, there was an informal convention recognising five Great Powers in Europe: the French Empire, the British Empire, the Russian Empire, the Austrian Empire (later Austria-Hungary) and the Kingdom of Prussia (later the German Empire). In the late 19th century the newly united Italy was added to this group.

By the early 20th century, two non-European states, Japan and the United States of America, would come to be respected as fellow Great Powers. By World War II China would be recognized as a great power.