From Infogalactic: the planetary knowledge core
Jump to: navigation, search
This article is about the county in Wales. For other uses, see Kingdom of Powys and Powys (surname).

Powys (/ˈpoʊ.ɪs/ or /ˈpaʊ.ɪs/;[1] Welsh: [ˈpowɪs]) is a principal area, local-government county and preserved county in Mid Wales. It is named after the successor Kingdom of Powys, which formed after the Romans withdrew from Britain.

See the list of places in Powys for all towns and villages in Powys.

Powys covers the historic counties of Montgomeryshire and Radnorshire, most of Brecknockshire (Breconshire), and a small part of Denbighshire — an area of 5,179 km² (2,000 sq miles), making it the largest county in Wales by land area.

It is bounded to the north by Gwynedd, Denbighshire and Wrexham; to the west by Ceredigion and Carmarthenshire; to the east by Shropshire and Herefordshire; and to the south by Rhondda Cynon Taf, Merthyr Tydfil, Caerphilly, Blaenau Gwent, Monmouthshire and Neath Port Talbot.

Most of Powys is mountainous, with north-south transport being difficult.

The majority of the Powys population lives in villages and small towns. The largest towns are Newtown, Ystradgynlais, Brecon, and Welshpool with populations of 12,783, 9,004, 7,901 and 6,269 respectively (2001). Powys has the lowest population density of all the principal areas of Wales.

Just under a third of the residents have Welsh linguistic skills: Welsh speakers are concentrated mainly in the rural areas both in and around Machynlleth, Llanfyllin and Llanrhaeadr-ym-Mochnant (where William Morgan first translated the whole Bible into Welsh in 1588) in Montgomeryshire (Welsh: Sir Drefaldwyn), and the industrial area of Ystradgynlais in the extreme south-west of Brecknockshire (Welsh: Sir Frycheiniog). Radnorshire (Welsh: Sir Faesyfed) was almost completely Anglicised by the end of the 18th century. The 2001 census records show 21% of the population of Powys were able to speak Welsh at that time, the same as for Wales as a whole.[2]

The county is named after the ancient Welsh Kingdom of Powys, which in the sixth century AD included the northern two thirds of the area as well as most of Shropshire and adjacent areas now in England, and came to an end when it was occupied by Llywelyn ap Gruffudd of Gwynedd during the 1260s.

The uplands retain evidence of occupation from long before the Kingdom of Powys, and before the Romans, who built roads and forts across the area. There are 1130 identified burial mounds within the county, of varying styles and ages, dating from 4000BC to 1000BC, most of them belonging to the Bronze Age.[3] Of these, 339 are Scheduled Monuments. Standing stones, most again dating to the Bronze Age, also occur in large numbers, 276 being found across the county, of which 92 are scheduled. From the Iron Age, the county has 90 scheduled Hill forts and a further 54 enclosures and settlement sites.

The gold in the county coat of arms (see right) symbolises the wealth of the area. Black is for both mining and the Black Mountains. The fountain is a medieval heraldic charge displayed as a roundel barry wavy Argent and Azure. It represents water, and refers to both the water catchment area and the rivers and lakes. Thus the arms contain references to the hills and mountains, rivers and lakes, water supply and industry.

The crest continues the colouring of the arms. A tower has been used in preference to a mural crown, which alludes to the county's military history and remains. From the tower rises a red kite, a bird almost extinct elsewhere in Britain, but thriving here. The bird is "semy of black lozenges" for the former coal mining industry, while the golden fleece it carries is a reference to the importance of sheep rearing in Powys.[4]

The county motto is: Powys – the paradise of Wales (Welsh: Powys Paradwys Cymru). 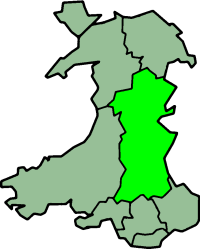 Powys was originally created on 1 April 1974 under the Local Government Act 1972, and originally had Montgomery and Radnor and Brecknock as districts under it, which were based directly on the former administrative counties.

On 1 April 1996, the districts were abolished, and Powys was reconstituted as a unitary authority, with a minor border adjustment in the north-east (specifically the addition of the communities of Llansilin and Llangedwyn from Glyndwr district in Clwyd, along with the movement of the border so that all of, and not as previously half of, Llanrhaeadr-ym-Mochnant was in Powys, all historically part of Denbighshire).

In December 2007 Powys was awarded Fairtrade County status by the Fairtrade Foundation.[5]

Recent research suggests that Powys is the happiest place in the UK,[6] however, even the researchers said the numbers were not statistically significant.[6]