Pozzuoli (Italian pronunciation: [potˈtswɔːli]; Neapolitan: Pezzulo, Latin: Puteoli) is a city and comune of the Metropolitan City of Naples, in the Italian region of Campania. It is the main city of the Phlegrean Peninsula.

Pozzuoli began as the Greek colony of Dicaearchia (Greek: Δικαιαρχία). The Roman colony was established in 194 BC, and took the name Puteoli which it has his roots from 'puteus', meaning well (also usede from sibyls to predict the future) and 'osco fistulus' (cave).[1] An alternative etymology of Puteoli from the Latin puteo (to stink), referring to the sulfuric smell in the area, most notably from Solfatara.[2] This is because Pozzuoli lies in the center of the Campi Flegrei, a volcanic caldera.

Puteoli was the great emporium for the Alexandrian grain ships, and other ships from all over the Roman world. It also was the main hub for goods exported from Campania, including blown glass, mosaics, wrought iron, and marble. The Roman naval base at nearby Misenum housed the largest naval fleet in the ancient world. It was also the site of the Roman Dictator Sulla's country villa and the place where he died in 78 BC.

The local volcanic sand, pozzolana (Latin: pulvis puteolanus, "dust of Puteoli") formed the basis for the first effective concrete, as it reacted chemically with water. Instead of just evaporating slowly off, the water would turn this sand/lime mix into a mortar strong enough to bind lumps of aggregate into a load-bearing unit. This made possible the cupola of the Pantheon, which is still the world's largest unreinforced concrete dome. 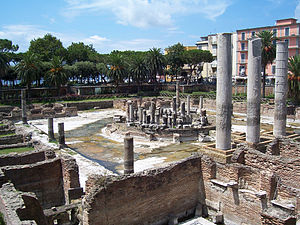 The ancient Macellum of Pozzuoli was a market building, erroneously identified as a Serapeum when a statue of Serapis was discovered.

The apostle Paul landed here on his way to Rome, from which it was 170 miles (274 kilometres) distant. Here he stayed for seven days (Acts 28:13, 14) and then began with his companions his journey by the Appian Way to Rome.

In 37 AD Puteoli was the location for a political stunt by Emperor Gaius Caligula, who on becoming Emperor ordered a temporary floating bridge to be built using trading vessels, stretching for over two miles (3.2 km) from the town to the famous neighboring resort of Baiae, across which he proceeded to ride his horse, in defiance of an astrologer's prediction that he had "no more chance of becoming Emperor than of riding a horse across the Gulf of Baiae".[3]

Saint Proculus (San Procolo) was martyred here with his companions in the fourth century, and is the city's patron saint. The seven eagle heads on the coat-of-arms for the town of Pozzuoli are said to represent seven of these martyrs. November 16 was the official feast day for Saint Proculus. St. Proculus was affectionately nicknamed 'u pisciasotto ("the pants-pisser") because November 16 was often a day of rain. The townspeople also celebrated his feast day on the second Sunday in May.[2]

Charles Lyell visited Pozzuoli in 1828 and studied the Macellum columns.

Since 1946 the town has been the home of the Accademia Aeronautica, the Italian Air Force Academy, which was first situated on the island of Nisida, then from 1962 on a purpose-built hilltop campus overlooking the bay.

From August 1982 to December 1984 the city experienced hundreds of tremors and bradyseismic activity which reached a peak on October 4, 1983, damaging 8,000 buildings in the city center and dislocating 36,000 people, many permanently. The events raised the sea bottom by almost 2 m, and rendered the Bay of Pozzuoli too shallow for large craft.

The town's attractions include: 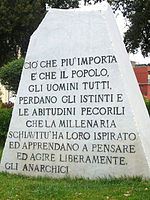 A unique anarchist monument is present in the small garden close to the Roman Macellum. It's made of a marble block and has the following text written on it: 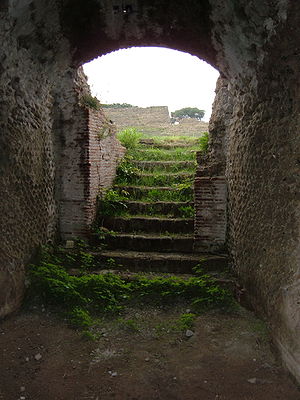 Flavian Amphitheater (Amphitheatrum Flavium), from below 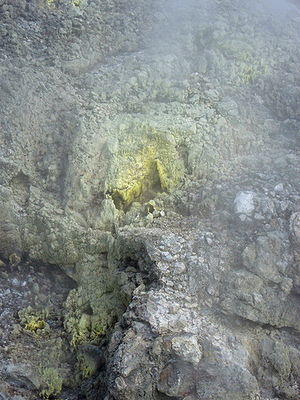 Fumarole in the Solfatara

It is easily reached by train from Rome on Naples Metro line 2, and by the trains of "Cumana" lines leaving from the station of Montesanto, in the city center.