Praia da Vitória (Portuguese pronunciation: [ˈpɾajɐ ðɐ viˈtɔɾiɐ]), translated as the Beach of the Victory, is a municipality in the Portuguese archipelago of the Azores. With a population of 21,035 (in 2011), the second largest administrative authority on the island of Terceira, it covers an area of 161.27 square kilometres (62.27 sq mi), that extends from the northern coast halfway into the interior.[1] in an area of 161.27 km².[2]

The area of Praia, was one of the first points colonized on the island of Terceira. Praia constituted the seat of the Donatary-Captaincy of Terceira between 1456 and 1474; the island's first Captain, Jácome de Bruges along with his first lieutenant, Diogo de Teive), established their residency at this site. By 1474, the island was divided into two captaincies (Praia and Angra): the Captaincy of Praia reverted to Álvaro Martins Homem, Bruges' successor. The growth of the woad industry and export wheat market concentrated along the fertile Ramo Grande area, allowed Praia to grow rapidly. Consequently, Praia was elevated to the status of vila (comparable to town) in 1480 (then still within the administration of Álvaro Martins Homem).

By the last quarter of the 16th century, Gaspar Frutuoso (the celebrated Azorean historian), wrote of Praia in these terms:

"...and shortly there is the town of Praia, noble and sumptuous and with good buildings, built in a very good style, circled by a good wall, with its forts and bulwarks all around, populated by nobles and older residents, with one of the older settlements of the island, circled by famous and rich farms of nobles and grandiose nobility, with a parish and sumptuous church of three naves, with a vaulted main chapel and porticoes and pillars of well worked marble, all circled by chapels of the grand first-born...its principal invocation is to the Holy Cross...where the house of Mercy and hospital, with two churches, one the hospital of the Holy Spirit and the other to Our Lady, with a nave down the middle...; it's a famous monastery of Saint Francis where there still continue to reside ten or twelve religious, where there are many chapels of the grand first-born similar to the above indicated; three monasteries for nuns, the more principal of the those is to Jesus..., with forty nuns with black veils and two, one of Our Lady of the Light and the other Our Lady of the Stigmata, give obedience and observation to Saint Francis, where there are few religious"[3]

During the Iberian Union, King Phillip II of Spain ordered an armada to Terceira to impose the governorship of Ambrósia de Aguiar Coutinho on his unruly subjects in the Azores and facilitate shipping to the Indies. Under the command of Pedro de Valdez, the fleet arrived in Santa Maria with seven large carracks and 1000 troops, took on provisions and sailed for São Miguel in the spring (where Governor Ambrósio de Aguiar Coutinho and his cousin supplied the group). After an initial assault on Angra, Valdez rushed to assault the island, disembarking troops at the Casa da Salga, in the valley of Porto Judeu (a mile from Vila de São Sebastião), incensed that King Phillip was sending a larger contingent to capture Terceira. The Battle of Salga became an important event in the village of São Sebastião (then a parish of Praia) broke out along the coast in 1582.

During the Restoration of Portuguese Independence, the citizenry of Praia acclaimed King John IV, when Francisco Ornelas da Câmara arrived in Terceira.

The settlement was destroyed during the 1614 Caída da Praia earthquake, with many of the residents along the coast lost to the sea. Along the 17th century, even as the community was being re-constructed, there were several seismic aftershocks.

During the Liberal Wars, the harbour was the scene of a naval battle (in 1829) between the Liberals and the Absolutists, competing factions in support of King Pedro IV and King Miguel, respectively, during the Liberal Wars. The Battle of Praia ensued when a squadron of Miguelist troops attempted to disembark at Praia (11 August 1829). As a result of this victory, Queen Maria II after being restored to the throne, acted to recognize its residents for their heroism by appending "Mui Notável" (Very notable) and "da Vitória" (of the Victoria) to its name (12 January 1837): it was at this time that Praia became known as Praia da Vitória.

Its economic importance in the economy of the north continued, even after the second Caída da Praia earthquake (on 15 June 1841), that partially destroyed the settlement. Its reconstruction, at the end of the 19th century was motivated by councillor José Silvestre Ribeiro. As priest Jerónimo Emiliano de Andrade (who lived in the town at the time), referred to Praia da Vitória:

"The traveller who leaves Cabo da Praia is quickly encounters the magnificent and majestic Vila da Praia da Vitória, which is located a short distance, no less than a quarter league..."

The town was elevated to city on 20 June 1981, although it continued to be referred to as the Vila da Praia da Vitória (until 1983). In the second half of the 20th century, a large aerodrome was constructed along the southwestern side of the Portuguese Air Base No.4. In addition, the port of Praia was expanded to include a 1400-metre extension. These two projects have supported the municipality's growth, along with its large industrial centre. 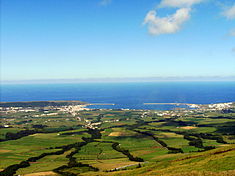 Praia da Vitória occupies the northern and eastern coasts of Terceira, bisecting it from northwest to southeast, through a varied geomorphology.

Administratively, the municipality of Praia da Vitória is divided into the following civil parishes, which handle local distribution of services and support the local residents:

The urban centre, that includes the parishes of Lajes and Santa Cruz, fronts a ridge known as Facho that overlooks the airport of Lajes. It was used as a lookout for pirates and invaders, and later as marine military semaphore station and primitive lighthouse (lasting for 400 years). Apart from pasture-lands, the ridge was occupied by marine/naval housing and support buildings for Portuguese Air Base 4. At the far end is a monument dedicated to the Sacred Heart of Mary and lookout.

Praia da Vitória is a services, fishing and agricultural municipality and boasts a large marina, popular with the yachting community, with the only sizeable sand beach on Terceira.

Lajes Air Base, a joint United States and Portuguese air force base, lies three kilometers to the north of the town. American servicemen frequent the restaurants and clubs in the town and add considerably to the local economy.

The town boasts two notable churches, several public squares, and a number of hotels and restaurants. 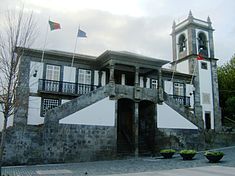 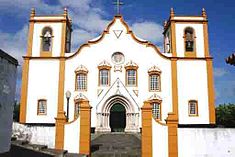 It is popular with windsurfers because of the constant seabreezes. Praia da Vitoria hosts an annual triathlon and is known for its unique style of bullfighting, tourada à corda.