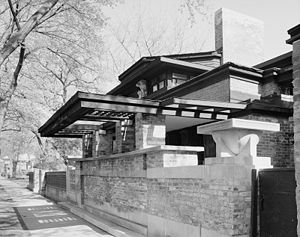 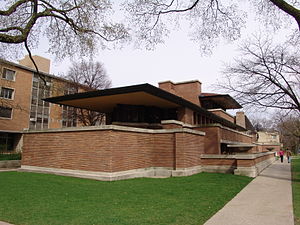 Robie House, 1910. It is considered by many to be the quintessential Prairie house 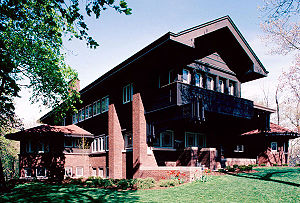 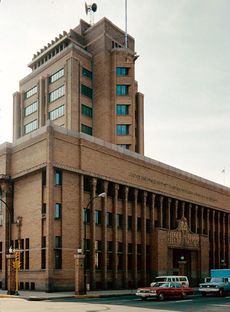 Prairie School is a late 19th- and early 20th-century architectural style, most common in the Midwestern United States. The style is usually marked by horizontal lines, flat or hipped roofs with broad overhanging eaves, windows grouped in horizontal bands, integration with the landscape, solid construction, craftsmanship, and discipline in the use of ornament. Horizontal lines were thought to evoke and relate to the wide, flat, treeless expanses of America's native prairie landscape.

The Prairie School was an attempt at developing an indigenous North American style of architecture in symphony with the ideals and design aesthetics of the Arts and Crafts Movement, with which it shared an embrace of handcrafting and craftsman guilds as an antidote to the dehumanizing effects of mass production.

The term Prairie School was not actually used by practitioners of the style. Architect Marion Mahony, for example, preferred the phrase The Chicago Group. Its term was coined by H. Allen Brooks, one of the first architectural historians to write extensively about the movement and its work.[1]

The Prairie School developed in symphony with the ideals and design aesthetics of the Arts and Crafts Movement begun in the late 19th century in England by John Ruskin, William Morris, and others. Along with the kindred American Craftsman movement it shared an embrace of handcrafting and craftsman guilds as a reaction against the new assembly line mass production manufacturing techniques, which was felt to create inferior products and dehumanize workers.

The Prairie School was also an attempt at developing an indigenous North American style of architecture that did not share design elements and aesthetic vocabulary with earlier styles of European classical architecture. Many talented and ambitious young architects had been attracted by building opportunities stemming from the Great Chicago Fire of 1871. The World's Columbian Exposition (Chicago World's Fair) of 1893 was supposed to be a heralding of the city of Chicago's rebirth. But many of the young Midwestern architects of what would become the Prairie School were offended by the Greek and Roman classicism of nearly every building erected for the fair. In reaction, they sought to create new work in and around Chicago that would display a uniquely modern and authentically American style, which came to be called Prairie.

The designation Prairie is due to the dominant horizontality of the majority of Prairie style buildings, which echoes the wide, flat, treeless expanses of the mid-Western United States. The most famous proponent of the style, Frank Lloyd Wright, promoted an idea of "organic architecture" (p. 53),[2] the primary tenet of which was that a structure should look as if it naturally grew from the site. In the words of Wright, buildings that appeared as if they were "married to the ground." (p. 53)[2] Wright also felt that a horizontal orientation was a distinctly American design motif, in that the younger country had much more open, undeveloped land than found in most older and highly urbanized European nations.

Prairie School houses are characterized by open floor plans, horizontal lines, and indigenous materials. These were related to the American Arts and Crafts movement and its emphasis on hand craftsmanship, simplicity, and function. Both were alternatives to the then-dominant Classical Revival Style of Greek forms with occasional Roman influences. Some firms, such as Purcell & Elmslie, which accepted the honest presence of machine worked surfaces, consciously rejected the term "Arts and Crafts" for their work. The Prairie School was also heavily influenced by the Idealistic Romantics who believed better homes would create better people, and the Transcendentalist philosophy of Ralph Waldo Emerson. In turn, Prairie School architects influenced subsequent architectural idioms, particularly the less is more ethos of Minimalists and form following function in Bauhaus, itself a mixture of De Stijl grid-based design and Constructist emphasis on the structure itself and its building materials.

Architectural historians have debated the reasons why the Prairie School went out of favor by the mid-1920s. In her autobiography, Prairie School architect Marion Mahony suggests:

The enthusiastic and able young men as proved in their later work were doubtless as influential in the office later as were these early ones but Wright's early concentration on publicity and his claims that everybody was his disciple had a deadening influence on the Chicago group and only after a quarter of a century do we find creative architecture conspicuously evident in the United States.[3] 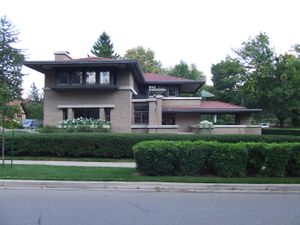 The Meyer May House in Grand Rapids, Michigan. Built between 1908 and 1909, this Frank Lloyd Wright-designed home is considered "Michigan's Prairie masterpiece."[4]

An example of Prairie School architecture is the aptly named "The Prairie School", a private day school in Racine, Wisconsin, designed by Taliesin Associates (an architectural firm originated by Wright), and located almost adjacent to Wright's Wingspread Conference Center. Mahony's and Griffin's work in Australia and India, notably the collection of homes at Castlecrag, New South Wales, are fine examples of how the Prairie School spread far from its Chicago roots. Isabel Roberts' Veterans' Memorial Library in St. Cloud, Florida, is another.[5] The House at 8 Berkley Drive at Lockport, New York was listed on the National Register of Historic Places in 2009.[6]

The Oak Circle Historic District is a historic district in Wilmette, Illinois, United States. It primarily consists of fifteen single-family homes representative of the Prairie School and Craftsman styles of architecture constructed between 1917 and 1929. The Oak Circle Historic District was added to the National Register of Historic Places on June 21, 2001; it was the first historic district to be designated in Wilmette.

Interest in the ideas and designs of the Prairie School artists and architects has grown since the late 1980s, thanks in large part to celebrity collecting habits and high-profile auction results on many of the decorative designs from buildings of the era. In addition to numerous books, magazine articles, videos and merchandise promoting the movement, a number of original Prairie School building sites have become public museums, open for tours and special interactive events. Several not-for-profit organizations and on-line communities have been formed to educate people about the Prairie School movement and help preserve the designs associated with it. Some of these organizations and sites are listed in the External links section below.