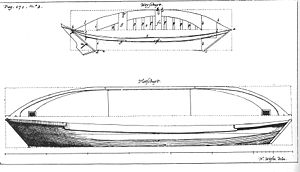 Drawing of a 17th-century pram by Nicolaes Witsen.

A pram or pramm describes a type of shallow-draught flat-bottomed ship.

They were used in Europe during the 18th century, particularly in the Baltic Sea during the Great Northern War and Napoleonic Wars, as the pram's shallow draught allowed it to approach the shore. They typically carried 10-20 guns on one gun deck, and had either two or three masts. They were the kind of transport Napoleon would have used to cross the English channel.

More commonly today "pram" refers to a small utility dinghy with a transom bow rather than a pointed bow. This type of pram provides a more efficient use of space than does a traditional skiff of the same size. Modern prams are often 8 to 10 feet long and built of plywood, fibreglass, plastic or aluminum.

The Mirror and Optimist sailboats are examples of this form. Other prams are usually oar powered.

The Norwegian pram is commonly made of solid timber with lots of fore and aft rocker with a U shape cross section. In New Zealand and Australia the most common pram is an arc or v bottom rowboat commonly made of 6mm marine plywood often sealed with paint and/or epoxy resin.

In the past such boats were often used as a tender; today small inflatable crafts are more frequently used for this purpose instead.