From Infogalactic: the planetary knowledge core
Jump to: navigation, search
For other uses, see Prato (disambiguation). 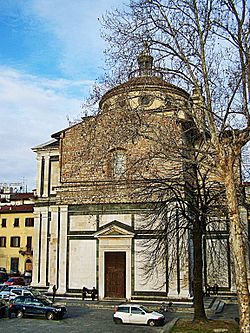 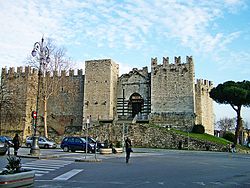 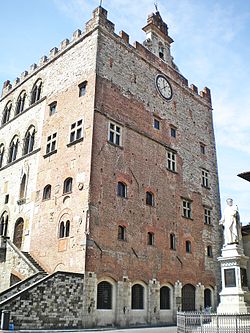 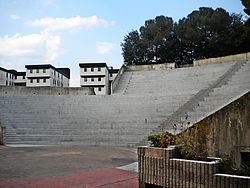 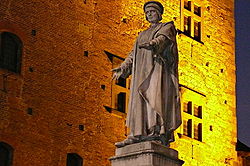 Statue of Francesco Datini in front of the Palazzo Pretorio.

listen)) is a city and comune in Tuscany, Italy, the capital of the Province of Prato. The city is at the foot of Monte Retaia, elevation 768 metres (2,520 ft), the last peak in the Calvana chain. The lowest elevation in the comune is 32 metres (105 ft), near the Cascine di Tavola, and the highest is the peak of Monte Cantagrillo at 818 metres (2,684 ft). The Bisenzio River, a tributary of the Arno, flows through it.

Historically, Prato's economy has been based on the textile industry. The renowned Datini archives are a significant collection of late medieval documents concerning economic and trade history, produced between 1363 and 1410.[1]

Since the late 1950s, the city has experienced significant immigration, firstly from southern Italy, then from other nationalities, the most notable being a large Chinese community which first arrived in the late 1980s. With more than 189,000 inhabitants, Prato is Tuscany's second largest city and the third largest in Central Italy, after Rome and Florence.

Archaeological findings have proved that Prato's surrounding hills were inhabited since Paleolithic times. The plain was later colonized by the Etruscans. In 1998 remains of a previously unknown city from that civilization were discovered in the neighbourhood, at Gonfienti (Prato) near Campi Bisenzio: it was of medium size and it was already a centre for wool and textile industry. According to some scholars, it could be the mythical Camars. The Etruscan city was inhabited until the 5th century BC, when, for undisclosed reasons, it decayed; control of the area was later shifted to the Romans, who had their Via Cassia pass from here, but did not build any settlement.

In the early Middle Ages the Byzantine and Lombard dominations followed. The history of Prato itself begins from the 10th century, when two distinct villages, Borgo al Cornio and Castrum Prati (Prato's Castle), are known. In the following century the two settlements were united under the lords of the castle, the Alberti family, who received the imperial title of Counts of Prato. In the same period the plain was dried and a hydraulic system regulating and exploiting the waters of the Bisenzio River was created to feed the gualchierae (pre-industrial textile machines).

After a siege in 1107 by the troops of Matilde of Canossa, the Alberti retreated to their family fortresses in the Bisenzio Valley: Prato could therefore develop as a free commune. Within two centuries it reached the number of 15,000 inhabitants, spurred in by the flourishing textile industry and by the presence of the Holy Belt relic. Two new lines of walls had to be built in the mid-12th century and, respectively, from the early 14th century. In 1326, in order to counter the expansionism of Florence, Prato submitted voluntarily under the seigniory of Robert of Anjou, King of Naples. However, on 23 February 1351 Joanna I of Naples sold the city to Florence in exchange of 17,500 golden florins. Prato's history therefore followed that of the former in the following centuries.

In 1512, during the War of the Holy League, the city was sacked by Spanish troops assembled by Pope Julius II and the king of Aragón, Ferdinand II, to recover the nearby city of Florence for the Medici family. The severity of the sack of Prato led to the surrender of the Florentine Republic, and to the restoration of the Medici rule. Historians debate the actual number of people killed during the sack, but contemporary chroniclers asserted between 2000 and 6000 people were slaughtered in the streets.

In 1653 Prato obtained the status of city and became seat of a Catholic diocese. The city was embellished in particular during the 18th century.

After the unification of Italy in the 19th century, Prato became a primary industrial centre, especially in the textile sector (Italian historian Emanuele Repetti described it as the "Italian Manchester"), and population grew up to 50,000 in 1901 and to 180,000 in 2001. The town experienced a significant internal immigration. Previously part of the province of Florence, in 1992 Prato became the capital of the eponymous province.

Chinese immigration and its economic impact 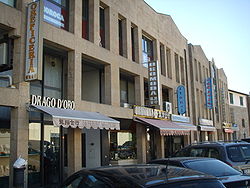 The city of Prato has the second largest Chinese immigrant population in Italy (after Milan with Italy's largest Chinatown). Legal Chinese residents in Prato on 31 December 2008 were 9,927.[2] Local authorities estimate the number of Chinese citizens living in Prato to be around 45,000, illegal immigrants included.[3] Most overseas Chinese come from the city of Wenzhou in the province of Zhejiang, some of them having moved from Chinatown in Paris. The first Chinese people came to Prato in the early 1990s. The majority of Chinese work in 3,500 workshops in the garment industry and ready-to-wear. Chinatown is located in the west part of the city, spreading to Porta Pistoiese in the historical centre. The local Chamber of Commerce registered over 3,100 Chinese businesses by September 2008.[4] Most of them are located in an industrial park named Macrolotto di Iolo. Raids on factories employing illegal immigrants in 2010 highlighted problems with the growth of an apparel industry in Prato based on cheap, and sometimes illegal, labor.[5] In spite of all these blames, the local unemployment rate was around 7% in 2013, which was significantly lower than the national average 11%, even after 4,000 enterprises which employed 20,000 people were closed in the past two decades. The president of the Industrial Association of Prato, Andrea Cavicchi, pointed out that the local economic performance was much better than the rest of Italy due to those Chinese textile business.[6]

The dialect from Prato is very similar to that of Florence, but it has its own peculiarities. The pronunciation of the city name in the dialect was traditionally [ˈpraː.o] but now [ˈpraːho] or [ˈpraːθo] are more common.

Prato is home to many museums and other cultural monuments, including the Filippo Lippi frescoes in the Cathedral of Santo Stefano, recently restored. The Cathedral has an external pulpit by Donatello and Michelozzo, built and still used for the display of the cathedral's famous relic of the Virgin Mary, the Girdle of Thomas (Sacra Cintola, a cord belt), which had a great reputation in the late Middle Ages and is often shown in Florentine art. Also of interest is the Teatro Metastasio, the city's main venue for operas and other theatrical productions, which was built in 1829–30. 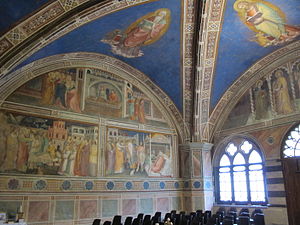 Higher-education institutions include Il Polo Universitario "Città di Prato" (a branch of the Università degli Studi di Firenze)[7] and the Monash University Centre which is located in the Palazzo Vai.[8] The University of New Haven opened a satellite campus in Prato in 2012.

Prato is twinned with: