Prayer beads are used by members of various religious traditions such as Hinduism, Buddhism, Catholicism/Orthodoxy, Islam, Sikhism and the Bahá'í Faith to mark the repetitions of prayers, chants or devotions, such as the rosary of the Blessed Virgin Mary in Catholicism, and dhikr (remembrance of God) in Islam.

Beads are among the earliest human ornaments and ostrich shell beads in Africa date to 10,000 BC.[1] Over the centuries various cultures have made beads from a variety of materials from stone and shells to clay.[1]

The English word bead derives from the Old English noun bede which means a prayer.[2][3][4][5] The exact origins of prayer beads remain uncertain, but their earliest use probably traces to Hindu prayers in India.[1][3][6] Buddhism probably borrowed the concept from Hinduism.[1][3] The statue of a holy Hindu man with beads dates to the 3rd century BC.[3][6] 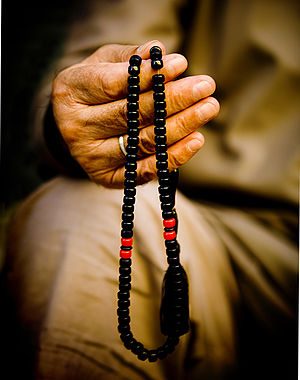 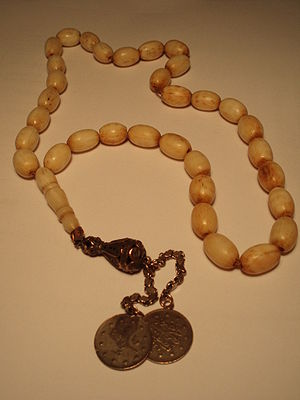 A misbaha, a device used for counting tasbih

The number of beads varies by religion or use. Islamic prayer beads, called "Misbaha" or "Tasbih", usually have 99 or 33 beads. Buddhists and Hindus use the Japa Mala which usually has 108 beads, or 27 which are counted four times. Baha'i prayer beads consist of either 95 beads or 19 beads strung with the addition of five beads below. The Sikh Mala also has 108 beads.

Roman Catholics use the "Rosary" (Latin "rosarium", meaning "rose garden") with 54 and additional five beads whereas Eastern Orthodox Christians use a knotted "Rosary" with 100 knots, although "prayer ropes" with 50 or 33 knots can also be used. Although Anglo-Catholics have used the Dominican rosary since the 19th century, in the 1980s Rev. Lynn Bauman from the Episcopal Church in the United States of America introduced a Rosary for Anglicans with 33 beads.[7]

The Greek "komboloi" (which are worry beads and have no religious purpose) has an odd number of beads—usually one more than a multiple of four, e.g. (4x4)+1, (5x4)+1.

Since the beads are fingered in an automatic manner, they allow the user to keep track of how many prayers have been said with a minimal amount of conscious effort, which in turn allows greater attention to be paid to the prayers themselves.

The Desert Fathers of the 3rd to 5th centuries, used pebbles or knotted ropes to count prayers, typically the Jesus Prayer ("Lord Jesus Christ, Son of God, have mercy on me, a sinner"). The invention is attributed to Anthony the Great or his associate Pachomius the Great in the 4th century.

The Catholic Encyclopedia mentions strings of beads, presumably for prayer, found in the tombs of Saint Gertrude of Nivelles (7th century) and Saint Norbert and Saint Rosalia (12th century).[8] A more explicit reference is that in 1125 William of Malmesbury mentioned a string of gems that Lady Godiva used to count prayers.[8][9]

These strings of beads were known as "paternosters" and were presumably used to count repetitions of the Lord's Prayer.[10] Later, Roman Catholics and eventually Anglicans prayed the rosary with strings of 54 plus an additional five beads. The term rosary comes from the Latin rosarium "rose garden" and is an important and traditional devotion of the Catholic Church, combining prayer and meditation in sequences (called "decades") of the Lord's Prayer, 10 Hail Marys, and a Gloria Patri as well as a number of other prayers (such as the Apostles' Creed and the Salve Regina) at the beginning and end. The prayers are accompanied by meditation on the Mysteries, events in the life and ministry of Jesus. This traditional Catholic form of the rosary is attributed to Saint Dominic,[11] though some Catholic writers have doubted this claim.[10]

Catholic rosary beads are composed of crucifix and center which can be made of sterling silver and/or gold, and beads which are usually made of glass, amethyst, rose quartz stone, crystal, black onyx, lavender glass or pearl.[12] Catholics also use prayer beads to pray chaplets.

The Eastern Orthodox Church uses prayer ropes with 33, 50 or 100 knots. The loops of knotted wool (or occasionally of beads), called chotki or komboskini to pray the Jesus Prayer. Although among the Orthodox, their use is mainly restricted to monks and bishops, being less common among laity or secular clergy. Among Russian Old Believers, a prayer rope made of leather, called 'lestovka', is more common, although this type is no longer commonly used now by the Russian Orthodox Church. According to the Catholic Encyclopedia, "The rosary is conferred upon the Greek Orthodox monk as a part of his investiture with the mandyas or full monastic habit, as the second step in monastic life, and is called his 'spiritual sword'."[10] Ethiopian and Coptic prayer rope (called mequteria) employ numbers such as 41, 64, and 100 as their length and is used for reciting the Kyrie Eleison. The first two numbers represent the number of lashes inflicted on Jesus and Mary's age upon her Assumption.

In the mid-1980s, Anglican prayer beads or "Christian prayer beads" was developed in the Episcopal Church of the United States by Episcopalians participating in a study group dealing with methods of prayer.[7] The set consists of 33 beads (representing the 33 years of the life of Christ) arranged in four groupings of symbolic significance. These "Anglican Rosaries" continue to be promoted via internet websites but it is not known whether they have been adopted by any Protestant group in any formal sense. Many Anglo-Catholics use the Catholic rosary and may also be using Anglican prayer beads.

The contemporary Wreath of Christ,[13] invented by Martin Lönnebo, Bishop Emeritus of the Diocese of Linköping of the Swedish Lutheran Church, is a set of 18 beads, some round and some elongated, arranged in an irregular pattern. Each one has its own significance as a stimulus and reminder for meditation, although they can also be used for repetitive prayer.[citation needed]

While there are liturgical churches using prayer beads in prayer, non-liturgical Christian churches do not use them. 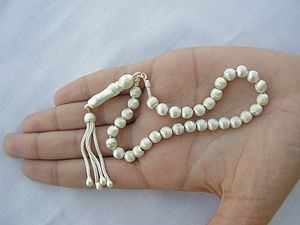 In Islam, prayer beads are referred to as Misbaha (Arabic: مسبحة mas'baha ), Tasbih or Sibha and contain 99 beads, corresponding to the Names of God in Islam. Sometimes only 33 beads are used, in which case one would cycle through them three times. The beads are traditionally used to keep count while saying the prayer known as the "Tasbih of Fatimah", which was a form of prayer offered as a gift by Muhammad to his daughter, which is recited as follows: 33 times "Subhan Allah" (Glory be to God), 33 times "Al-hamdu lilah" (Praise be to God), and 33 times "Allahu Akbar" (God is the greatest) which equals 99, the number of beads in the misbaha. It is highly recommended to recite this prayer after the daily five ritual prayers.

Use of the misbaha to count prayers and recitations is an evolution of Muhammad's practice of using the fingers of his right hand to keep track.[14] While they are widely used today, some adherents of the Salafi movement shun them as an intolerable innovation, preferring to stick to the exact method believed to have been used by Muhammad. Muhammad ordered to count Dhikr on fingers and warned that the fingers will be questioned (Abu Dawood 1501). Their use as a religious item has somewhat diminished over the years, except among adherents of Sufism, and many use them nowadays strictly as worry beads and as status symbols.[15][16]

The adherents of Ahmadiyya sect do not, however, use prayer beads. According to the fourth Khalifa of the community, the use of prayers beads in Islam is a form of innovation which was not practised by the founder of Islam, Muhammad.[17]

Sikh worshipers may use mala (prayer beads) while reciting verses from the Guru Granth Sahib.[18] These prayer beads may be used as a part of the Sikh attire and worn around turbans or wrists. 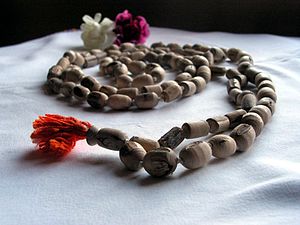 An early use of prayer beads can be traced to Hinduism[19][20][21] where they are called japa mala. Japa is the repeating of the name of a deity or a mantra. Mala (Sanskrit: माला mālā) means "garland" or "wreath".[22]

Japa mala are used for repetition of a mantra, for other forms of sādhanā or "spiritual exercise" and as an aid to meditation. The most common mala have 108 beads.[23] The most common materials used for making the beads are Rudraksha seeds (used by Shaivites) and Ocimum tenuiflorum (tulsi) stems (used by Vaishnavites). 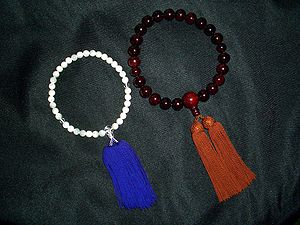 Prayer beads (Chinese: 数珠; pinyin: shùzhū, Japanese: juzu, Hangul: 염주rr=yeomju, Standard Tibetan: ཕྲེང་བ།) are also used in many forms of Mahayana Buddhism, often with a lesser number of beads (usually a divisor of 108). In Pure Land Buddhism, for instance, 27-bead malas are common. These shorter malas are sometimes called "prostration rosaries" because they are easier to hold when enumerating repeated prostrations. In Tibetan Buddhism malas are also 108 beads: one mala counts as 100 mantras, and the eight extra are meant to be dedicated to all sentient beings (the practice as a whole is dedicated at its end as well). In Tibetan Buddhism, often larger malas are used; for example, malas of 111 beads. When counting, they calculate one mala as 100 mantras and the 11 additional beads are taken as extra to compensate for errors.[verification needed]

Various type of materials are used to make mala beads such as seeds of the rudraksha, beads made from the wood of the tulsi plant, animal bone, wood or seeds from the Bodhi Tree (a particularly sacred tree of the species Ficus religiosa) or of Nelumbo nucifera (the lotus plant). Semi-precious stones like carnelian and amethyst are also used. Another commonly used material is sandalwood.[24] 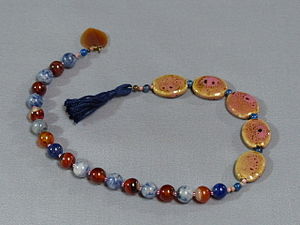 The Bahá'í Faith stipulates that the verse Alláh-u-Abhá "God the All-Glorious" be recited 95 times daily after the performance of ablutions.[25] To help facilitate this recitation Bahá’ís often use prayer beads, though they are not required to. Most commonly, Bahá’í prayer beads consist of 95 individual beads on a strand or a strand of 19 beads with 5 set counters. In the latter case, the person reciting the verses typically tracks the 19 individual verses in a set with one hand and tracks the sets of verses with the other (19 verses times 5 sets for a total of 95 total verses). Bahá’í prayer beads are made of any number of natural and man-made materials including glass, precious and semi-precious stones, various metals and wood. There are no traditions regarding the structure of the prayer bead strand or the materials used.