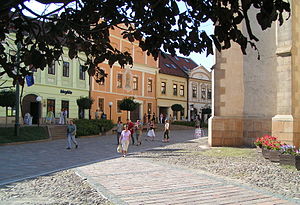 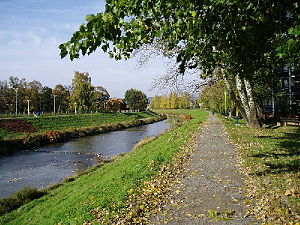 listen)) is a city in eastern Slovakia. It is the seat of the administrative Prešov Region (Slovak: Prešovský kraj). With a population of approximately 91,352, it is the third-largest city in the country. There are many tourist attractions in Presov such as castles, pools, churches, and the beautiful city.

Historically, the city has been known in German as Eperies (between 1938 and 1945 also Preschau), Eperjes in Hungarian, Fragopolis in Latin, Preszów in Polish, Peryeshis in Romany, Пряшев (Pryashev) in Russian and Пряшів (Priashiv) in Rusyn and Ukrainian. Both eper and fragum; frago- in Hungarian and Latin, respectively, mean 'strawberry.' However, the names for the city in Slavic languages has another etymology.

The city is a showcase of Baroque, Rococo and Gothic architecture. In the historical center, the main street is lined with churches and other buildings built in these styles. In the suburbs, however, the Soviet influence is clearly evident through the massive concrete panel buildings (paneláky) of the housing estates (sídliska) and the Sekčov district. More Soviet-style architecture is seen in the government buildings near the city center.

Significant industries in the city include mechanical and electrical engineering companies and the clothing industry. Solivary, the only salt mining and processing company in Slovakia, also operates in the city. The city is a seat of a Greek Catholic metropolitan see.

Many concerts, operas, operettas and stage plays are performed at the new building of the Jonáš Záborský Theatre (Divadlo Jonáša Záborského), as well as at the older theatre premises.

The city and the region were contenders for European Capital of Culture 2013.[1] The nearby city of Košice was chosen.

Habitation in the area around Prešov dates as far back as the Paleolithic period. The oldest discovered tools and mammoth bones are 28,000 years old. Continuous settlement dates back to the 8th century.

The first record of a school dates from 1429. In 1572, salt mining began in Solivar (at that time a nearby town, now part of Presov). Prešov's increased importance meant that in 1647 it became the seat of the (Šariš) county.

Antun Vrančić, a Croatian[2] prelate, writer, diplomat and Archbishop of Esztergom, died in Prešov in 1573.

In 1667 the important Evangelic Lutheran College of Eperjes was established by Lutherans in the town. In 1687 twenty-four prominent citizens and noblemen were executed for supporting the uprising of Imre Thököly.

At the beginning of the 18th century, the population was decimated by the Bubonic plague and fires and was reduced to a mere 2,000 inhabitants. By the second half of the century, however, the town had recovered; crafts and trade improved, and new factories were built. In 1752 the salt mine in Solivar was flooded. Since then salt has been extracted from salt brine through boiling.

In 1870 the first railway was built. This was a line connecting the town to Košice. At the end of the 19th century, the town introduced electricity, telephone, telegraph and a sewage systems. In 1887 fire destroyed a large part of the town. On 16 June 1919, the very brief Slovak Soviet Republic was declared here. In 1920, after the Treaty of Trianon, Eperjes became part of the newly created Czechoslovakia as Prešov. During World War II, the nearby town of Košice again became part of Hungary as a result of the First Vienna Award. As a result, many institutions moved from Košice to Prešov, thus increasing the town's importance. In 1944, a professional Slovak Theatre was established in Prešov. On 19 January 1945 Prešov was taken by Soviet troops of the 1st Guards Army. 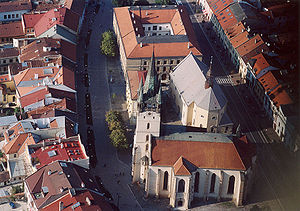 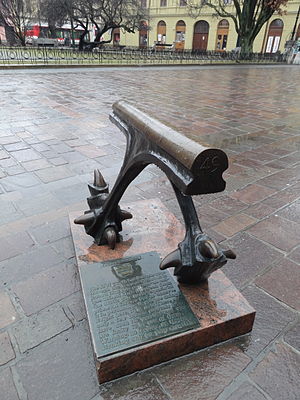 The 49° degree latitude is marked by a monument.

Prešov lies at an altitude of 250 metres (820 ft) above sea level and covers an area of 70.4 square kilometres (27.2 sq mi).[3] It is located in the north-eastern Slovakia, at the northern reaches of the Košice Basin, at the confluence of the Torysa River with its tributary Sekčov. Mountain ranges nearby include Slanské vrchy (south-east), Šarišská vrchovina (south-west), Bachureň (west) and Čergov (north). The neighbouring city of Košice is 34 kilometres (21 mi) to the south. Prešov is about 50 kilometres (31 mi) south of the Polish border, 60 kilometres (37 mi) north of the Hungarian border and is some 410 kilometres (255 mi) northeast of Bratislava (by road).

Prešov lies in the north temperate zone and has a continental climate with four distinct seasons. It is characterized by a significant variation between hot summers and cold, snowy winters. 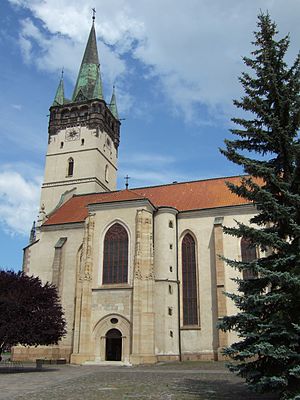 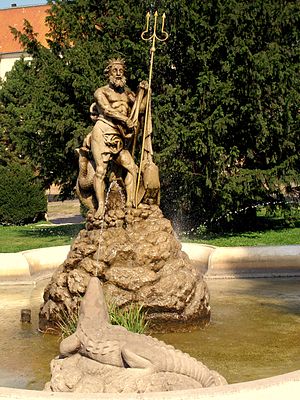 Neptune's fountain on the Hlavná ulica (Main Street) in Prešov

Before World War II Prešov also had a large Jewish population of 4,300 and housed a major Jewish museum. During 1939 and 1940 the Jewish community absorbed a flow of Jewish refugees from Nazi-occupied Poland, and in 1941 additional deportees from Bratislava. In 1942 a series of deportations of Prešov's Jews to the Nazi death camps in Poland began. Plaques in the town hall and a memorial in the surviving synagogue record that 6,400 Jews were deported from the town under the Tiso government of the First Slovak Republic. Only 716 Jewish survivors were found in the city and its surrounding when it was liberated by the Soviet Red Army in January 1945.

Institutions of tertiary education in the city are the University of Prešov with 12,549 students, including 867 doctoral students,[5] and the private International Business College ISM Slovakia in Prešov, with 455 students.[6] In addition, the Faculty of Manufacturing Technologies of the Technical University of Košice is based in the city.

The city's handball club is HT Tatran Prešov which is Slovakia's most popular and currently most successful club.

Prešov is twinned with: