From Infogalactic: the planetary knowledge core
Jump to: navigation, search
For other uses, see Prefect (disambiguation). 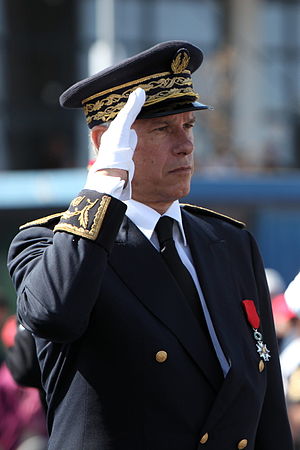 Prefect of the Bouches-du-Rhône departement (France) during Bastille Day ceremony.

Prefect (from the Latin praefectus, substantive adjectival[1] form of praeficere: "put in front", i.e., in charge) is a magisterial title of varying definition, but which, basically, refers to the leader of an administrative area.

A prefect's office, department, or area of control is called a prefecture, but in various post-Roman empire cases there is a prefect without a prefecture or vice versa. The words "prefect" and "prefecture" are also used, more or less conventionally, to render analogous words in other languages, especially Romance languages.

Praefectus, often with a further qualification, was the formal title of many, fairly low to high-ranking, military or civil officials in the Roman Empire, whose authority was not embodied in their person (as it was with elected Magistrates) but conferred by delegation from a higher authority. They did have some authority in their prefecture such as controlling prisons and in civil administration.

The Praetorian prefect (Praefectus praetorio) began as the military commander of a general's guard company in the field, then grew in importance as the Praetorian Guard became a potential kingmaker during the Empire. From the Emperor Diocletian's tetrarchy (c. 300) they became the administrators of the four Praetorian prefectures, the government level above the (newly created) dioceses and (multiplied) provinces.

For some auxiliary troops, specific titles could even refer to their peoples:

Roman provinces were usually ruled by high-rank officials. Less important provinces though were entrusted to prefects, military men who would otherwise only govern parts of larger provinces. The most famous example is Pontius Pilate, who governed Judaea at a time when it was administered as an annex of Syria.

As Egypt was a special imperial domain, a rich and strategic granary, where the Emperor enjoyed an almost pharaonic position unlike any other province or diocese, its head was styled uniquely Praefectus Augustalis, indicating that he governed in the personal name of the august emperor. Septimius Severus, after conquering Mesopotamia, introduced the same system there too.

After the mid-first century, as a result of the Pax Romana, the governorship was gradually shifted from the military prefects to civilian fiscal officials called procurators, Egypt remaining the exception.[3]

Especially in Medieval Latin, præfectus was used to refer to various officers—administrative, military, judicial, etc.—usually alongside a more precise term in the vernacular (such as Burggraf, which literally means Count of the Castle in the German language). 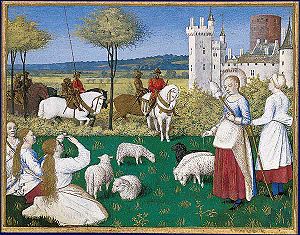 Saint Margaret attracts the attention of the Roman prefect, by Jean Fouquet from an illuminated manuscript

The term is used by the Roman Catholic Church, which based much of its canon law terminology on Roman law, in several different ways.

Many college preparatory boarding schools utilize the position of Prefect as a high student leadership position.

In the 1980s, under the presidency of François Mitterrand (1981-1995), a fundamental change in the role of the prefect (and sub-prefect) took place. The previously extremely centralized French (Fifth) Republic was gradually decentralized by the creation of the Regions and the devolution of central state powers towards the Régions, Départements and Communes (municipalities). New elected authorities were created (e.g. the Conseils régionaux) in order to administrate the subdivisional entities (collectivités territoriales) of the nation (law from 2 March 1982). The changes have gradually altered the function of the prefect. He is still the supreme representative of the state in a département, but has lost his omnipotent function of chief administrator. Instead, he has acquired the roles of chief controller (not a title) of regional, departemental and communal public accounts and of chief inspector (not a title) of good (i.e. law-abiding) governance of the authorities of the respective territorial entities.[4]

A Préfet maritime is a French Admiral (Amiral) who is commissioned to be the chief commander of a Zone maritime (i.e. a section of the French territorial waters and the respective shores).

In Paris, the Préfet de police (prefect of police) is the head of the city's police under the direct authority of the Ministre de l'Intérieur (Minister of the Interior), which makes him unique as usually in French towns and cities the chief of the local police is subordinated to the maire (mayor), who is the local representative of the minister in police matters.

The Prefect of Police (Préfet de police) is the officer in charge of co-ordinating police forces in Paris (see above under "France"). The local police in Japan are divided among prefectures too.