Intentional burial, particularly with grave goods, may be one of the earliest detectable forms of religious practice (the onset of burial itself being a canonical indicator of behavioral modernity) since, as Philip Lieberman suggests, it may signify a "concern for the dead that transcends daily life".[1] 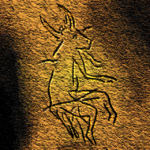 Picture of a half-animal half-human being in a Paleolithic cave painting in Dordogne, France which archeologists believe may provide evidence for early shamanic practices

Animal worship during the Upper Paleolithic intertwined with hunting rites.[4] For instance, archeological evidence from Paleolithic art and from bear remains reveals that the bear cult apparently had a type of sacrificial bear ceremonialism in which a bear was shot with arrows, then finished off with a shot in the lungs and ritualistically buried near a clay bear-statue covered by a bear fur, with the skull and the body of the bear buried separately.[4]

There are no extant textual sources from the Neolithic era, the most recent available dating from the Bronze Age, and therefore all statements about any belief systems Neolithic societies may have possessed are glimpsed from archaeology.

Jacques Cauvin suggested that the Neolithic Revolution was influenced by an important theme he termed the "Revolution of the Symbols", suggesting the birth of "religion" in the Neolithic. He argued that Neolithic humans were influenced by a change in thinking as much as changes in the environment and noted a series of stages in this process.[5] His work suggested important concepts in the evolution of human thinking, by examining figurines and early art depicting first women as goddesses and bulls as gods, he suggested several important ideas about the evolution of perception and duality.[6]

The structures known as Circular Enclosures built in Central Europe during the 5th millennium BC have been interpreted as serving a cultic function. In the case of the Goseck circle, remains of human sacrifice were found. Many of these structures had openings aligned with sunset and/or sunrise at the solstices, suggesting that they served as a means of maintaining a lunisolar calendar. The construction of Megalithic monuments in Europe also began to in the 5th millennium, and continued throughout the Neolithic and in some areas well into the early Bronze Age.

Marija Gimbutas, pioneer of feminist archaeology, put forward a notion of a "woman-centered" society surrounding "goddess worship" in Neolithic Europe. The Neolithic "matristic" cultures would have been replaced by patriarchy only with the arrival of the Bronze Age. Gimbutas' views do not have widespread support today.[7]

The early Bronze Age Proto-Indo-European religion (itself reconstructed), and the attested early Semitic gods, are presumed continuations of certain traditions of the late Neolithic.

Hints to the religion of Bronze Age Europe include images of solar barges, frequent appearance of the Sun cross, deposits of bronze axes, and later sickles, so-called moon idols, the conical golden hats, the Nebra skydisk, and burial in tumuli, but also cremation as practised by the Urnfield culture.

While the Iron Age religions of the Mediterranean, Near East, India and China are well attested in written sources, much of Iron Age Europe, from the period of about 700 BC down to the Great Migrations, falls within the prehistoric period. There are scarce accounts of non-Mediterranean religious customs in the records of Hellenistic and Roman era ethnography.

In the case of Circumpolar religion (Shamanism in Siberia, Finnic mythology), traditional African religions, native American religions and Pacific religions, the prehistoric era mostly ends only with the Early Modern period and European colonialism. These traditions were often only first recorded in the context of Christianization.

For these reasons, the interpretations and understanding of the Iron Age cult in Europe has to rely primarily on archaeological material.