From Infogalactic: the planetary knowledge core
Jump to: navigation, search
This article is about the state of the US military prior to entry in World War I. For disaster preparedness, see Survivalism.

The Preparedness Movement, also referred to as the Preparedness Controversy, was a campaign led by Leonard Wood and Theodore Roosevelt to strengthen the military of the United States after the outbreak of World War I.[1] Wood advocated a summer training school for reserve officers to be held in Plattsburg, New York.

The movement was originally opposed by President Woodrow Wilson, who believed the United States should be in a position of armed neutrality. Several organizations were formed around the Preparedness Movement and held parades and organized opposition to Wilson's policies. After the Lusitania was sunk by German U-boats on May 7, 1915 and Pancho Villa launched his raid against Columbus, New Mexico, Wilson's attitude changed.[2] Congress passed the National Defense Act of 1916 in June 1916 to authorize an enormous increase in the size of the military, and the Preparedness Movement faded.[3] 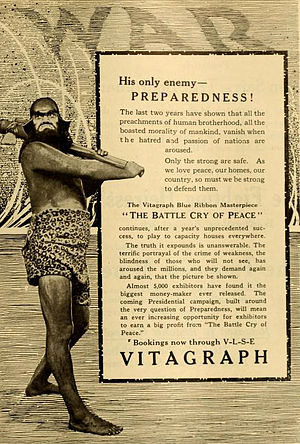 The advertisement of The Battle Cry of Peace film
Main article: American entry into World War I

In 1915, a strong "preparedness" movement emerged. It argued that the United States needed to immediately build up strong naval and land forces for defensive purposes; an unspoken assumption was that the US would fight sooner or later. General Leonard Wood (still on active duty after serving a term as Chief of Staff of the Army), ex-president Theodore Roosevelt, and former secretaries of war Elihu Root and Henry Stimson were the driving forces behind the Preparedness Movement, along with many of the nation's most prominent bankers, industrialists, lawyers and scions of prominent families. There emerged an "Atlanticist" foreign policy establishment, a group of influential Americans drawn primarily from upper-class lawyers, bankers, academics, and politicians of the Northeast US, committed to a strand of Anglophile internationalism.[4]

A representative leader was Paul D. Cravath, one of New York's foremost corporation lawyers. For Cravath, in his mid-fifties when the war began, the conflict served as an epiphany, sparking an interest in international affairs that dominated his remaining career. Fiercely Anglophile, he strongly supported US intervention in the war and hoped that close Anglo-American cooperation would be the guiding principle of post-war international organization.[5]

The preparedness movement had a "realistic" philosophy of world affairs—they believed that economic strength and military muscle were more decisive than idealistic crusades focused on causes like democracy and national self-determination. Emphasizing over and over the weak state of national defenses, they showed that America's 100,000-man army even augmented by the 112,000 National Guardsmen, was outnumbered 20 to one by German army, which was drawn from a smaller population. Reform to them meant UMT or "universal military service", i.e. conscription They proposed a national service program under which the 600,000 men who turned 18 every year would be required to spend six months in military training, and afterwards be assigned to reserve units. The small regular army would primarily serve as a training agency.

This proposal ultimately failed, but it fostered the Plattsburg Movement, a series of summer training camps that in 1915 and 1916 hosted some 40,000 men largely of elite social classes, and the later Citizens' Military Training Camps that trained some 400,000 men from 1921 to 1940.

File:Antipreparedness protest 1916.jpg
The Socialist Party was a bulwark of opposition to the Preparedness Movement. (May Day parade, New York City, 1916).

Antimilitarists and pacifists — strong in Protestant churches and women's groups — protested the plan would make the US resemble Germany (which required two years' active duty). Advocates retorted that military "service" was an essential duty of citizenship, and that without the commonality provided by such service the nation would splinter into antagonistic ethnic groups. One spokesman promised that UMT would become "a real melting pot, under which the fire is hot enough to fuse the elements into one common mass of Americanism." Furthermore, they promised, the discipline and training would make for a better paid work force. The hostility to military service was so strong at the time it is difficult to imagine such a program winning approval; indeed, even in World War II, when Stimson as Secretary of War proposed a similar program of universal peacetime service, he was defeated.[6][7] Underscoring its commitment, the preparedness movement set up and funded its own summer training camps (at Plattsburg, New York, and other sites) where 40,000 college alumni became physically fit, learned to march and shoot, and ultimately provided the cadre of a wartime officer corps.[8]

Suggestions by labor unions that talented working class youth be invited to Plattsburg were ignored. The preparedness movement was distant not only from the working classes but also from the middle class leadership of most of small town America. It had had little use for the National Guard, which is saw as politicized, localistic, poorly armed, ill trained, too inclined to idealistic crusading (as against Spain in 1898), and too lacking in understanding of world affairs. The National Guard on the other hand was securely rooted in state and local politics, with representation from a very broad cross section of American society. The guard was one of the nation's few institutions that (at least in some northern states) accepted African-Americans on an equal footing with whites.

The Democratic Party saw the preparedness movement as a threat. Roosevelt, Root and Wood were prospective Republican presidential candidates. More subtly, the Democrats were rooted in localism that appreciated the National Guard, and the voters were hostile to the rich and powerful in the first place. Working with the Democrats who controlled Congress, Wilson was able to sidetrack the preparedness forces. Army and navy leaders were forced to testify before Congress to the effect that the nation's military was in excellent shape.

In fact neither the army nor navy was in shape for war. Despite the flood of new weapons systems unveiled in the war in Europe, the army paid scant attention. For example, it was making no studies of trench warfare, poison gas or tanks, and was unfamiliar with the rapid evolution of air tactics. The Democrats in Congress tried to cut the military budget in 1915. The preparedness movement effectively exploited the surge of outrage over the Lusitania in May, 1915, forcing the Democrats to promise some improvements to the military and naval forces.

Wilson, less fearful of the navy, embraced a long-term building program designed to make the fleet the equal of the Royal Navy by the mid-1920s. "Realism" was at work here; the admirals were Mahanians and they therefore wanted a surface fleet of heavy battleships second to none—that is, equal to Britain. The facts of submarine warfare (which necessitated destroyers, not battleships) and the possibilities of imminent war with Germany (or with Britain, for that matter), were simply ignored.

Wilson's program touched off a firestorm within the army.[9] Secretary of War Lindley Garrison adopted many of the proposals of the preparedness leaders, especially their emphasis on a large federal reserves and abandonment of the National Guard. Garrison's proposals not only outraged the localistic politicians of both parties, they also offended a strongly held belief shared by the liberal wing of the progressive movement. They felt that warfare always had a hidden economic motivation. Specifically, they warned the chief warmongers were New York bankers (like J. P. Morgan) with millions at risk, profiteering munition makers (like Bethlehem Steel, which made armor, and DuPont, which made powder) and unspecified industrialists searching for global markets to control. Antiwar critics blasted them. These selfish special interests were too powerful, especially, Senator LaFollette noted, in the conservative wing of the Republican Party. The only road to peace was disarmament, reiterated Bryan.

Garrison's plan unleashed the fiercest battle in peacetime history over the relationship of military planning to national goals. In peacetime, War Department arsenals and navy yards manufactured nearly all munitions that lacked civilian uses, including warships, artillery, naval guns, and shells. Items available on the civilian market, such as food, horses, saddles, wagons, and uniforms were always purchased from civilian contractors. Armor plate (and after 1918, airplanes) were exceptions that have caused unremitting controversy for a century.

Peace leaders like Jane Addams of Hull House and David Starr Jordan, president of Stanford University, redoubled their efforts, and now turned their voices against Wilson because he was "sowing the seeds of militarism, raising up a military and naval caste." Many ministers, professors, farm spokesmen and labor union leaders joined in, with powerful support from a band of four dozen southern Democrats in Congress who took control of the House Military Affairs Committee.

Wilson Appeals to the People

Wilson, in deep trouble, took his cause to the people in a major speaking tour in early 1916, a warm-up for his reelection campaign that fall. Wilson seems to have won over the middle classes, but had little impact on the largely ethnic working classes and the deeply isolationist farmers. Congress still refused to budge, so Wilson replaced Garrison as Secretary of War with Newton Baker, the Democratic mayor of Cleveland and an outspoken opponent of preparedness. (Garrison's kept quiet, but felt Wilson was "a man of high ideals but no principles.")

So a compromise was passed in May 1916, as the war raged on and Berlin was debating whether America was so weak it could be ignored. The army was to double in size to 11,300 officers and 208,000 men, with no reserves, and a National Guard that would be enlarged in five years to 440,000 men. Summer camps on the Plattsburg model were authorized for new officers, and the government was given $20 million to build a nitrate plant of its own. Preparedness supporters were downcast, the antiwar people were jubilant. America would now be too weak to go to war. Colonel Robert L. Bullard privately complained that "Both sides [Britain and Germany] treat us with scorn and contempt; our fool, smug conceit of superiority has been exploded in our faces and deservedly." The House gutted the naval plans as well, defeating a "big navy" plan by 189 to 183, and scuttling the battleships. The Battle of Jutland (May 31/June 1, 1916) saw the German fleet nearly sunk by the stronger British fleet. Only brilliant seamanship and luck allowed it to escape. Arguing this battle proved the validity of Mahanian doctrine, the navalists took control in the Senate, broke the House coalition, and authorized a rapid three-year buildup of all classes of warships. A new weapons system, naval aviation, received $3.5 million, and the government was authorized to build its own armor-plate factory. The very weakness of American military power encouraged Berlin to start its unrestricted submarine attacks in 1917. It knew this meant war with America, but it could discount the immediate risk because the US Army was negligible and the new warships would not be at sea until 1919 by which time the war would be over, with Germany victorious. The notion that armaments led to war was turned on its head: refusal to arm in 1916 led to war in 1917.[by whom?]