Bush was born in Columbus, Ohio,[1] to Samuel Prescott Bush and Flora Sheldon Bush. Samuel Bush was a railroad middle manager, then a steel company president and, during World War I, also a federal government official in charge of coordination of and assistance to major weapons contractors.

Bush attended St. George's School in Newport, Rhode Island, from 1908 to 1913. In 1913, he enrolled at Yale University, where his grandfather, James Smith Bush (class of 1844), and his uncle Robert E. Sheldon Jr (class of 1904) had matriculated. Three subsequent generations of the Bush family have been Yale alumni. Prescott Bush was admitted to the Zeta Psi fraternity and Skull and Bones secret society. George H. W. Bush and George W. Bush are also members of that society.

According to Skull and Bones lore, Prescott Bush was among a group of Bonesmen who dug up and removed the skull of Geronimo from his grave at Fort Sill, Oklahoma, in 1918.[2] According to historian David L. Miller, the Bonesmen probably dug up somebody at Fort Sill, but not Geronimo.[3]

Prescott Bush was a cheerleader,[4] played varsity golf, football and baseball, and was president of the Yale Glee Club.

After graduation, Bush served as a field artillery captain with the American Expeditionary Forces (1917–1919) during World War I. He received intelligence training at Verdun, France, and was briefly assigned to a staff of French officers. Alternating between intelligence and artillery, he came under fire in the Meuse-Argonne offensive.

After his discharge in 1919, Prescott Bush went to work for the Simmons Hardware Company in St. Louis, Missouri.

The Bush family moved to Columbus, Ohio in 1923, where Prescott briefly worked for the Hupp Products Company. In November 1923, he became president of sales for Stedman Products in South Braintree, Massachusetts. During this time, he lived in a Victorian house at 173 Adams Street in Milton, Massachusetts, where his son, George H.W. Bush, was born.

In 1924, Bush became vice-president of the investment bank A. Harriman & Co. where his father-in-law, George Herbert Walker was president. Bush's Yale classmates and fellow Bonesmen E. Roland Harriman and Knight Woolley also worked with the company.

In 1925, he joined the United States Rubber Company of New York City as manager of the foreign division, and moved to Greenwich, Connecticut.

From 1944 to 1956, Prescott Bush was a member of the Yale Corporation, the principal governing body of Yale University. He was on the board of directors of CBS, having been introduced to chairman William S. Paley around 1932 by his close friend and colleague W. Averell Harriman, who became a major Democratic Party power-broker.

Bush was a founding member and one of seven directors (including W. Averell Harriman) of the Union Banking Corporation (holding a single share out of 4,000 as a director), an investment bank that operated as a clearing house for many assets and enterprises held by German steel magnate Fritz Thyssen.[6][7] In July 1942, the bank was suspected of holding gold on behalf of Nazi leaders.[8] A subsequent government investigation disproved those allegations but confirmed the Thyssens' control, and in October 1942 the United States seized the bank under the Trading with the Enemy Act and held the assets for the duration of World War II.[6] Journalist Duncan Campbell pointed out documents showing that Prescott Bush was a director and shareholder of a number of companies involved with Thyssen.[6]

According to journalist Joe Conason, Prescott Bush's involvement with UBC was purely commercial and he was not a Nazi sympathizer.[9] Historian Herbert Parmet agreed with that assessment.[7]

Prescott Bush was politically active on social issues. He was involved with the American Birth Control League as early as 1942, and served as the treasurer of the first national capital campaign of Planned Parenthood in 1947. He was also an early supporter of the United Negro College Fund, serving as chairman of the Connecticut branch in 1951.

From 1947 to 1950, he served as Connecticut Republican finance chairman, and was the Republican candidate for the United States Senate in 1950. A columnist in Boston said that Bush "is coming on to be known as President Truman's Harry Hopkins. Nobody knows Mr. Bush and he hasn't a Chinaman's chance."[10] (Harry Hopkins had been one of Franklin D. Roosevelt's closest advisors.) Bush's ties with Planned Parenthood also hurt him in heavily Catholic Connecticut, and were the basis of a last-minute campaign in churches by Bush's opponents; the family vigorously denied the connection, but Bush lost to Sen. William Burnett Benton by only 1,000 votes.

Prescott Bush sought a rematch with Sen. Benton in 1952, but withdrew as the party turned to William Purtell. The death of Senator Brien McMahon later that year, however, created a vacancy and this time the Republicans nominated Bush.[11] He defeated the Democratic nominee, Abraham Ribicoff, and was elected to the Senate. A staunch supporter of President Dwight D. Eisenhower, he served until January 1963. He was reelected in 1956 with 55 percent of the vote over Democrat Thomas J. Dodd (later U.S. Senator from Connecticut and father of Christopher J. Dodd), and decided not to run for another term in 1962. He was a key ally for the passage of Eisenhower's Interstate Highway System,[12] and during his tenure supported the Polaris submarine project (built by Electric Boat Corporation in Groton, Connecticut), civil rights legislation, and the establishment of the Peace Corps.[13]

On December 2, 1954, Prescott Bush was part of the large (67–22) majority to censure Wisconsin Republican Senator Joseph McCarthy after McCarthy had taken on the U.S. Army and the Eisenhower administration. During the debate leading to the censure, Bush said that McCarthy has "caused dangerous divisions among the American people because of his attitude and the attitude he has encouraged among his followers: that there can be no honest differences of opinion with him. Either you must follow Senator McCarthy blindly, not daring to express any doubts or disagreements about any of his actions, or, in his eyes, you must be a Communist, a Communist sympathizer, or a fool who has been duped by the Communist line."[14] Eisenhower later included Prescott Bush on an undated handwritten list of prospective candidates he favored for the 1960 GOP presidential nomination.

In terms of issues, Bush often agreed with New York Governor Nelson Rockefeller. According to Theodore H. White's book about the 1964 election, Bush and Rockefeller were longtime friends. Bush favored a Nixon-Rockefeller ticket for 1960, and was presumed to support Rockefeller's 1964 presidential candidacy until the latter's remarriage in 1963. He then publicly denounced Rockefeller for divorcing his first wife and marrying a woman with whom Rockefeller had been having an affair while married to his first wife.[13] 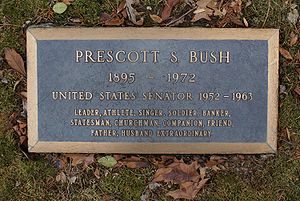 The grave of Prescott Bush

Bush founded the Yale Glee Club Associates, an alumni group, in 1937. As was his father-in-law, he was a member of the United States Golf Association, serving successively as secretary, vice-president and president, 1928–1935. He was a multi-year club champion of the Round Hill Club in Greenwich, Connecticut, and was on the committee set up by New York City Mayor Robert F. Wagner, Jr. to help create the New York Mets. 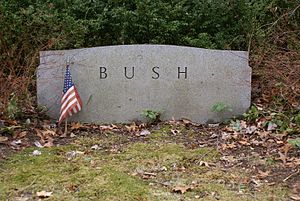 The headstone of Prescott Bush

He died in 1972 at age 77 and was interred at Putnam Cemetery in Greenwich, Connecticut.