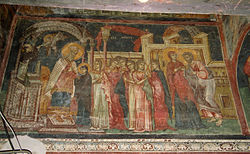 The Presentation of the Blessed Virgin Mary (as it is known in the West), or The Entry of the Most Holy Theotokos into the Temple (its name in the East), is a liturgical feast celebrated on November 21[1] by the Catholic and Orthodox Churches.

The feast is associated with an event recounted not in the New Testament, but in the apocryphal Infancy Narrative of James. According to that text, Mary's parents, Joachim and Anne, who had been childless, received a heavenly message that they would have a child. In thanksgiving for the gift of their daughter, they brought her, when still a child, to the Temple in Jerusalem to consecrate her to God. Later versions of the story (such as the Gospel of Pseudo-Matthew and the Gospel of the Nativity of Mary) tell us that Mary was taken to the Temple at around the age of three in fulfillment of a vow. Tradition held that she was to remain there to be educated in preparation for her role as Mother of God.

In Eastern Orthodox tradition, this is one of the days when women named Mary (Μαρία in Greek) and Despoina (Δέσποινα in Greek) celebrate their Name Day.

The account of the Presentation of the Blessed Virgin Mary in the Temple is principally based on the Protoevangelium of James, which has been dated by historians prior to the year 200 AD. The story relates that in thanksgiving for the birth of their daughter, Mary, Joachim and Anne decide to consecrate her to God, and bring her, at the age of three years, to the temple in Jerusalem. Mary’s presentation in the temple draws parallels to that of the prophet Samuel, whose mother Hannah, like Anne was also thought to be barren, and who offered her child as a gift to God at Shiloh.[2]

Mary remained in the Temple until her twelfth year,[2] at which point she was assigned to Joseph as guardian. According to Coptic tradition, her father Joachim died when Mary was six years old and her mother when Mary was eight.[2] While the story is a legend with no foundation in history, the point is to show that even in her childhood Mary was completely dedicated to God. It is from this account that arose the feast of Mary's Presentation.[3] 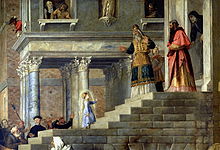 The Presentation of the Virgin Mary by Titian (1534-38, Gallerie dell'Accademia, Venice).

The feast originated as a result of the dedication of the Basilica of Saint Mary the New, built in 543 by the Byzantines under Emperor Justinian I near the site of the ruined Temple in Jerusalem.[3] This basilica was destroyed by the Sassanid Persians under Khosrau II after the Siege of Jerusalem (614). The first documented celebration of the feast in any calendar is the mention of the Εἴσοδος τῆς Παναγίας Θεοτόκου (Entry of the All-Holy Theotokos, i.e., into the Temple) in the Menologion of Basil II, an 11th-century menology of the Eastern Roman (also known as Byzantine) emperor Basil II.

The feast continued to be celebrated throughout the East, was celebrated in the monasteries of Southern Italy by the ninth century, and was introduced into the Papal Chapel in Avignon in 1372 by decree of Pope Gregory XI.[4][5] The feast was included in the Roman Missal in 1472, but was suppressed by Pope Pius V in 1568.[4] As a result, it did not appear in the Tridentine Calendar. Pope Sixtus V reintroduced it into the Roman Calendar in 1585.[6] Pope Clement VIII made this feast a greater double in 1597.[4] The feast also continued as a memorial in the Roman Calendar of 1969.

The Eastern Orthodox Church celebrates it on November 21 as one of its twelve Great Feasts. For those churches which follow the Julian Calendar, November 21 falls on December 4 of the modern Gregorian Calendar. In the Orthodox Church the feast always falls during the Nativity Fast, and on the day of the feast the fasting rules are lessened somewhat so that fish, wine, and oil may be eaten.

For the Roman Catholic Church, on the day of the Presentation of the Blessed Virgin Mary, "we celebrate that dedication of herself which Mary made to God from her very childhood under the inspiration of the Holy Spirit who filled her with grace ... ."[7] In the 1974 encyclical Marialis Cultus, Pope Paul VI wrote that "despite its apocryphal content, it presents lofty and exemplary values and carries on the venerable traditions having their origins in the Eastern churches".[3]

The three feasts of the Birthday of Our Lady, the Holy Name of Mary, and her Presentation in the Temple correspond in the Marian cycle with the first three feasts of the cycle of feasts of Jesus: namely, Christmas, the Holy Name of Jesus, and His Presentation at the Temple.[8] November 21 is also a "Pro Orantibus" Day, a day of prayer for cloistered religious "totally dedicated to God in prayer, silence, and concealment".[9]

The Presentation of the Virgin Mary Orthodox Monastery is located in Marshfield, Missouri.[11]

The Presentation Sisters, also known as the Sisters of the Presentation of the Blessed Virgin Mary (PBVM for short), a religious institute of Roman Catholic women, was founded in Cork, Ireland, by Nano (Honoria) Nagle in 1775.

The congregation of the Sisters of the Presentation of Mary, dedicated to the education of youth, was founded November 21, 1796, in Thueyts, France, by Marie Rivier.[12]

Western depictions usually focused on the lone figure of the young Mary climbing the steep steps of the Temple, having left her parents at the bottom, and climbing towards the chief priest and other Temple figures at the top of the steps. The Presentation was one of the usual scenes in larger cycles of the Life of the Virgin, although it was not usually one of the scenes shown in a Book of Hours.