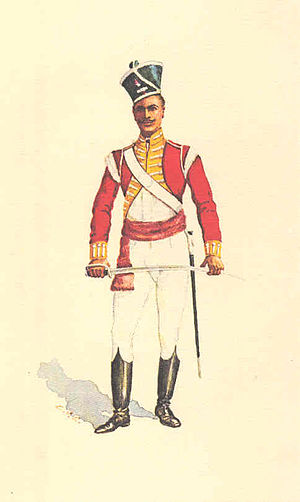 The presidency armies were the armies of the three presidencies of the East India Company's rule in India, later the forces of the British Crown in India. The presidency armies were named after the presidencies: the Bengal Army, the Madras Army and the Bombay Army. Initially, only Europeans served as commissioned or non-commissioned officers. In time, Indian Army units were garrisoned from Peshawar in the north, to Sind in the west, and to Rangoon in the east. The army was engaged in the wars to extend British control in India (the Mysore, Maratha and Sikh wars) and beyond (the Burma, Afghan, First and Second Opium Wars, and the Expedition to Abyssinia).

The origin of the British Indian Army and subsequently the army of independent India lies in the origins of the Presidency Armies which preceded them. The first purely Indian troops employed by the British were watchmen employed in each of the Presidencies of the British East India Company to protect their trading stations. These were all placed in 1748 under one Commander-in-Chief, Major-General Stringer Lawrence who is regarded as the "Father of the Indian Army".[1]

From the mid-eighteenth century, the East India Company began to maintain armies at each of its three main stations, or Presidencies of British India, at Calcutta (Bengal), Madras and Bombay. The Bengal Army, Madras Army, and Bombay Army were quite distinct, each with its own Regiments and cadre of European officers. All three armies contained European regiments in which both the officers and men were Europeans, as well as a larger number of ‘Native’ regiments, in which the officers were Europeans and the other ranks were Indians. They included Artillery, Cavalry and Infantry regiments, so historical sources refer to the Bengal/Madras/Bombay Artillery/Cavalry/Infantry (the latter often termed ‘Native Infantry’ or ‘N.I.’). From the mid-eighteenth century onwards, the Crown began to dispatch regiments of the regular British Army to India, to reinforce the Company’s armies. These troops are often referred to as ‘H.M.’s Regiments’ or ‘Royal regiments’.

In 1757, Robert Clive came up with the idea of sepoy battalions for the Bengal Presidency, which were to be armed, dressed and trained as the red coats and commanded by a nucleus of British officers. The Madras Army followed suit with six battalions in 1759 followed by the Bombay Army in 1767. Recruitment in all cases was done locally amongst single castes, from specific communities, villages and families.[1] Regular cavalry regiments were raised in 1784 of which only three survived the Indian Rebellion of 1857. Irregular cavalry were raised based on the indigenous system of raising cavalry by rulers of Indian states called the "silladar" system.[3] Irregular cavalry regiments had very few British officers. In addition, native artillery and pioneers (referred to later as sappers and miners) were also raised.[1] Between 1796 and 1804, a regimental system on two battalion basis was introduced. The battalions were only theoretically linked together and shared no esprit-de-corps. The number of British officers went up to 22 per battalion which led to the diminished importance of native officers. The control by the Regimental commander was excessive and exasperating to its battalions and the system was reverted in 1824 with units being formed into single battalion regiments with numbering as per their seniority of raising.[1]

Following the Indian Rebellion of 1857 and the consequent abolition of the East India Company, its European regiments were amalgamated in 1860 with the British Army, but its ‘Native’ regiments were not. The three separate Presidency Armies therefore continued to exist, and their European officers continued to be listed as members of the Bengal, Madras or Bombay Army rather than the British Army. However, the Presidency Armies began to be described collectively as the Indian Army. Another change resulting from the Indian Rebellion of 1857 was that henceforward artillery was confined to the British Army.

In 1895, the separate Presidency Armies were at last abolished and a fully unified Indian Army came into being. As before, its British officers were not members of the British Army, though as young subalterns they did serve for a year with a British Army regiment as part of their training before taking up permanent commissions with their Indian Army regiment.

Operational history of the Presidency armies

See also: The Great Game and European influence in Afghanistan for a more detailed description.