Through Argentine history, the office of the Head of State has undergone many changes, both in its title as in its features and powers. Current President Mauricio Macri was sworn into office on 10 December 2015.[2]

Features of the office

Sections 94 to 98 discuss the electoral requirements. A two-round system is used (Section 94). In order to win the election in the first turn, the winning candidate's party must receive either more than 45 percent of so-called "votos positivos" (Section 97) or at least 40 percent of "votos positivos" (positive votes) and be more than 10 percentage points ahead of the next most-voted candidate (Section 98). "Votos positivos" are the sum of all votes validly cast for any of the candidates, leaving out of the count blank and spoilt votes.

Under the 1994 constitutional amendment, the President serves for four years, with a possibility of immediate reelection for one more term. However, unlike the President of the United States, in Argentina a person may be reelected again after serving for two terms, and staying out of office for the following term. So after serving for two consecutive periods, the president is not allowed to run for a third consecutive one, but may return for the two following elections and so on. There is no limit for a person to be a candidate if he or she does not win the elections.

Under the constitution of 1853, the President served for six years, with no possibility of consecutive reelection. In 1949, reelection for an indefinite number of terms was allowed (and disabled in 1957). After the 1966 military coup, the rulers promulgated a law establishing terms of four years, terms which were never completed because of political instability.

In addition with the 1994 constitutional reform, the requirement of belonging to the Roman Catholic faith in order to be President or Vice President of the Republic, was also abolished.

President of the Nation has the following powers:

History of the office of Head of State

The origins of Argentina as a nation can be traced to 1776, when it was separated by the Spanish King from the existing Viceroyalty of Peru, creating the new Viceroyalty of the Río de la Plata. The Head of State continued to be the King, but he was represented locally by the Viceroy. These Viceroys were seldom natives of the country.

By the May Revolution of May 25, 1810, the first Argentine autonomous government, known as the Primera Junta, was formed in Buenos Aires. It was later known as the Junta Grande when representatives from the provinces joined. These early attempts of self-government were succeeded by two Triumvirates and, although the first juntas had presidents, the King of Spain was still regarded as Head of State (as independence had not yet been declared), and the executive power was still not in the hands of a single person. 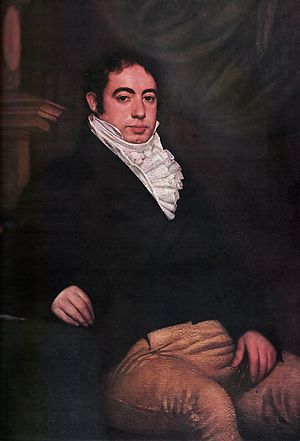 Bernardino Rivadavia the first president of the Argentine Nation

This power was vested in one man when the position of Supreme Director was created by the 1813 National Assembly. The Supreme Directors became Heads of State after Independence was declared on 9 July 1816, but there was not yet truly a presidential system.

In 1819, Congress declared Independence and composed a Constitution. This established an executive figure, named Supreme Director, who was vested with presidential powers. This constitution gave the Supreme Director the power of appointing Governors of the provinces. Due to political circumstances, this constitution never came into force, and the central power was dissolved, leaving the country as a federation of provinces.

A civil war between unitarios (unitarians, i.e. Buenos Aires centralists) and federales (federalists) ensued in the following decades. In this time, there was no central authority, and the closest to that was the Chairman of Foreign Relations, typically the Governor of the Province of Buenos Aires. The last to bear this title was Juan Manuel de Rosas, who in the last years of his governorship was elected Supreme Chief of the Confederation, gaining effective rule of the rest of the country.

It is debatable whether these military presidents can properly be called Presidents, as there are issues with the legitimacy of their governments. The position of the current Argentine government is that military Presidents Leopoldo Fortunato Galtieri and Jorge Rafael Videla were explicitly not legitimate presidents. They, and their immediate successors were denied the right to a presidential pension after the conclusion of their terms. The status of earlier military presidents, however, remains more uncertain.

Following military coups that overthrew the constitutional government were de facto military presidents in 1930-1932, 1943–1946, 1955–1958, 1966–1973 and 1976–1983 that brought in addition to the powers of the president also corresponding to Congress. The subsequent analysis of the validity of their actions led to the subsequent formulation of the doctrine of de facto governments.

That doctrine was nullified by the constitutional reform of 1994 (Article 36), which stated "usurpers" who have stopped the enforcement of the Constitution by acts of force.

Article 29 of the Constitution of 1853 had an article that considered the sum of public power as 'treason', but was referred to the de jure rulers. For this reason the constitutional reform of 1994 included Article 36 which says:[4]

"Article 36. This Constitution shall rule even when its observance is interrupted by acts of force against the institutional order and the democratic system. These acts shall be irreparably null.

"Their authors shall be punished with the penalty foreseen in Section 29, disqualified in perpetuity from holding public offices and excluded from the benefits of pardon and commutation of sentences.

"Those who, as a consequence of these acts, were to assume the powers foreseen for the authorities of this Constitution or for those of the provinces, shall be punished with the same penalties and shall be civil and criminally liable for their acts. The respective actions shall not be subject to prescription.

"All citizens shall have the right to oppose resistance to those committing the acts of force stated in this section.

"He who, procuring personal enrichment, incurs in serious fraudulent offense against the Nation shall also attempt against the democratic system, and shall be disqualified to hold public office for the term specified by law.

"Congress shall enact a law on public ethics which shall rule the exercise of public office."

In summary the article states:

The most famous presidential airplane, known as "Tango 01" (by analogy with U.S. Air Force One), owes its name to the denomination of T (pronounced tango in the NATO alphabet) for Transport, which creates an interesting word-game for the Argentine classical Tango music. The presidential helicopter is the usual means of transport between the Quinta de Olivos and the Casa Rosada.

The office of Vice-President was established by the 1853 Constitution for the purpose of providing a succession in case the President is unable to complete their term. The Argentine Constitution (art. 88) entitles the Vice-President to exercise the role and duties of the President, both in the case of a temporary absence and in the case of a permanent absence due to health reasons, death, resignation or removal.

In case of the permanent absence of both the President and the Vice-President, due to resignation, death, or removal, the Constitution (art. 88) entitles the National Congress Assembled to select a new President from among the current Senators, Deputies and Governors, within the following two days of the death or resignation of the former President, and to provide him or her with a mandate to call for elections.