The Constitution states that the president will be the embodiment of executive power, commander-in-chief, "representative of Azerbaijan in home and foreign policies", and that he "shall have the right of immunity [from prosecution]." The president rules through his office at Presidential Apparatus, consisting of a group of secretaries and departmental ministers. Additionally, there is a Cabinet of Ministers (regarding economic and social policy) and a Security Council (regarding foreign, military, and judicial matters).

Among the agencies directly subordinate to the President is the Special State Protection Service.

A candidate for office must be a citizen of Azerbaijan at least 35 years old, and 'permanently resided' in Azerbaijan for at least 5 years.[1]

The election of the President is mainly regulated by the Presidential Election Law (PEL) and the Basic Guarantees of Electoral Rights (BGL).[2]

Each faction in the National Assembly has the right to nominate a candidate for the presidential elections. The minimum number of signatures for a presidential candidate fielded by a political party with no parliamentary representation is 40,000, before amendments to the law.[3]

After the oath of office has been taken by the elected president, these following insignia are handed over to the president. These devices are used to display the rank of his office and are used on special occasions.

Guarantor of the Constitution

The primary working President's residence is the The Presidential building (also known as Presidential apparatus) on Istiglaliyyat Street in Baku.[4][5][6]

The current (since 2008) home President's residence is Zagulba (Azerbaijani: Zaqulba).[7]

Also, the President has several vacation residences outside of Baku. 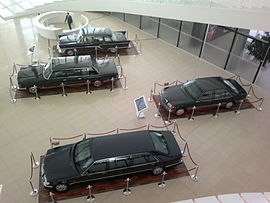 National transport services for the Azerbaijan President are provided by the Special Purpose Garage (SPG).[8] The SPG is a unit within the Special State Protection Service.[9]

The presidential aircraft uses the same colour scheme as standard AZAL aircraft, except for the use of the Azerbaijan coat of arms or the Presidential Standard on the empennage instead of the flag of Azerbaijan.

Presidents of the Republic of Azerbaijan (1991–present)

For leaders before independence, see List of leaders of Azerbaijan