The president of Chile (Spanish: Presidente de Chile), officially known as the president of the Republic of Chile (Spanish: Presidente de la República de Chile) is the head of state and head of government of the Republic of Chile. The president is responsible for both the Government of Chile and state administration.[2] Although its role and significance has changed over the history of Chile, as well as its position and relations with other actors in the national political organization, it is one of the most prominent political figures. It is also considered one of the institutions that make up the "Historic Constitution of Chile", and is essential to the country's political stability.[3]

Under the current Constitution (adopted in 1980), the president serves a four-year term, with immediate re-election being prohibited. The shorter period (previously the term was six years) allows for parliamentary and presidential elections to be synchronized. The official seat of the president of Chile is the La Moneda Palace in the capital Santiago.

Since 2018, Sebastian Piñera is the current president. He won the 2017 Chilean general election and assumed the office on 11 March 2018 for the second term. Previously, he held the position for the first term from 11 March 2010 to 2014.

Features of the office

Article 26 detail the electoral requirements. The president shall be elected by direct ballot, with an absolute majority of the votes validly cast. A two-round system is used. In order to win the election in the first round, the winning candidate's party must receive more than 50 percent of the valid votes leaving out of the count blank and spoiled votes.

The election shall be held the third Sunday of November of the year immediately before the end of the administration of the president then holding office. Should there be more than two candidates in the presidential election, none of them obtaining more than half of the votes validly cast, a new election shall be held. The second election ("balloting"), in the manner determined by law, shall be held the fourth Sunday after the first election, limited to the two candidates with the highest relative majorities. Then, the candidate with the majority of valid votes in that round is elected president.

Under the 2005 constitutional reform, the president serves for four years without the possibility of immediate reelection for one more term. A former president may run for office once again after serving their initial term, but only in an election following their successor, as it is not allowed to run for consecutive terms. There is no limit to how many times a person can run for candidacy if they have not previously served as president.

The incumbent president, in accordance with the constitution, completes their corresponding term on 11 March of the immediate year after the election. The president-elect takes office the same day.

The presidential sash, used initially by Bernardo O'Higgins, became a symbol of the authority of the first president with the assumption of office by President José Joaquín Prieto in 1831. It is composed of three stripes with the colors of the Chilean flag, it is sewn by hand and measured approximately 75 cm long and 13 cm wide.

From the nineteenth century a single sash was maintained that was transferred from president to president until 1915, due to the height differences between the outgoing Ramón Barros Luco and the elected Juan Luis Sanfuentes, so a new sash had to be designed. Since that date, each president has had his or her own presidential sash, which is used only in official ceremonies.

The O'Higgins Pioche, which is considered the symbol of presidential power and is placed at the lower end of the presidential sash, is a star of five ends of about 7 cm in diameter, enameled in red. It dates back to the medals of the Legion of Merit and remained intact until the coup d'etat of 1973, when it disappeared during the bombing of the La Moneda palace. During the military regime of Augusto Pinochet a replica of the pioche was created, based on photographs of the original. It is only used together with the presidential sash. 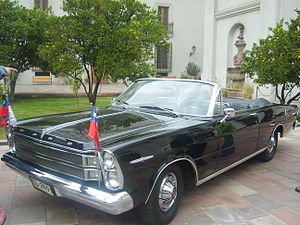 The president of Chile traditionally used an elegant horse drawn "Bandeja" Carriage imported from France by President José Manuel Balmaceda for ceremonial events until president Salvador Allende, not wanting to project the image of royalty that carriages now confer, acquired a used 1966 black Ford Galaxie XL convertible in 1970 for Queen Elizabeth II's visit to Chile.[5] Allende then used the vehicle as his official vehicle, with a normally issued license plate (EL-2801).

Both the carriage and the Galaxie have since been maintained by the state and are now used only for official ceremonies, such as state visits and the national holidays on 21 May and 19 September, and presidential inaugurations which take place on 11 March every four years.[6][7]