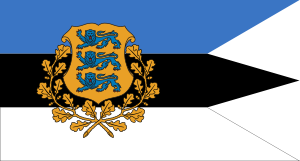 Flag of the President (at sea)

Estonia is a parliamentary republic in which the President is a ceremonial figurehead with no executive power. The President is obliged to suspend his membership in any political party for the term in office. Upon assuming office, the authority and duties of the President in all other elected or appointed offices terminate automatically. These measures should theoretically help the President to function in a more independent and impartial manner.

The President holds office for five years. He can be reelected any number of times, but not more than twice consecutively.

The current President is Toomas Hendrik Ilves, elected by an electoral body on 23 September 2006 and re-elected on 29 August 2011.

The authors of the first Estonian constitution, with memories of the Russian czars' abuses of power, tried to avoid concentrating too much power in one person's hands by all means possible. This eventually led to a creation of an ultra-parliamentary system. The power of the Parliament (Riigikogu) was practically unlimited. Until 1934, the nominal head of state was the State Elder, (riigivanem), who also served as de jure chairman of the cabinet—officially known as "the Government." However, he could not play a balancing role in the event of conflict between the Parliament and the Government. The State Elder and the Government were completely dependent on the Parliament and could be sacked by it at any time. The functions that are usually vested on a president in parliamentary systems were divided among the speaker of the Riigikogu, the State Elder and the Government.

Estonia's constitution was amended in 1933, instituting a strongly presidential system. The head of state, according to the new constitution, was also called the State Elder. However, it never came into effect as a result of Konstantin Päts's self-coup in 1934. In 1938, another constitution was enacted, and the head of state's title was changed to "President of the Republic." He was given very broad executive power, though he was somewhat less powerful than the State Elder of the 1933 constitution. Konstantin Päts became the first person to bear this title. His term was to last for six years. 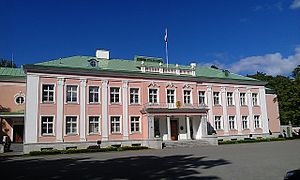 Within days after the Soviet occupation of Estonia in 1940, Päts was forced to appoint a Communist-dominated puppet government headed by Johannes Vares, following the arrival of demonstrators accompanied by Red Army troops with armored vehicles to the Presidential palace. The Vares government had actually been chosen by Soviet official Andrei Zhdanov. Following the sham elections in July, Päts was dismissed from office. Later in July Päts, along with his son, daughter-in-law and two grandsons, was deported to Ufa in Russia.

According to the 1938 constitution, if the President was ever incapacitated or is otherwise unable to carry out his functions, his duties were assumed by the Prime Minister under the title "Prime Minister in duties of the President." In accordance with this provision, Vares took over the functions of the president in order to give legal sanction to the formal annexation of Estonia by the Soviet Union in August. However, during times of war or incapacitation lasting longer than six months, the constitution provides for the election of an acting President by the Electoral Council. The Electoral Council met in secret on April 20, 1944, and determined that the appointment of Vares as Prime Minister in 1940 was unlawful according to the 1938 constitution. The Council elected Jüri Uluots as Acting President on April 21. Uluots appointed Otto Tief as Prime Minister. Tief was subsequently arrested by the re-occupying Soviet forces in September.

In September 1944, Uluots and the surviving members of the Tief government escaped to Sweden. The day before Uluots died in January, 1945, a successor, August Rei, was named to assume the position of acting President. Following Rei's death in 1963, the role passed to Aleksander Warma, then to Tõnis Kint in 1971, then to Heinrich Mark in 1990. In October 1992, Mark handed over his credentials to the newly elected President of the restored republic, Lennart Meri.

After Estonia regained independence, a new constitution was adopted that was based on a mixture of the 1920 and 1938 documents. During the drafting of the new constitution, it was initially planned to use the older, more traditional title, State Elder, for the head of state. However, the more modern term president was eventually chosen after public consultations. Five presidential elections have taken place (in 1992, 1996, 2001, 2006 and 2011). In the first four elections parliament failed to choose the President and the election passed to the electoral assembly. Lennart Meri was elected in 1992 (this election, unlike later ones, had a public round) and re-elected in 1996, defeating Arnold Rüütel both times. Rüütel himself became the next President in 2001. In 2006, Toomas Hendrik Ilves won the election and he was reelected by the parliament in 2011. The next presidential election will be held in 2016. [needs update]

The President of the Republic of Estonia:

Main article: List of heads of state of Estonia