The President of Iran (رئیس‌جمهور ایران Ra'isjomhur-e Iran) is the head of government of the Islamic Republic of Iran. The President is the highest popularly elected official in Iran, although the President answers to the Supreme Leader of Iran, who functions as the country's head of state. Chapter IX of the Constitution of the Islamic Republic of Iran sets forth the qualifications for presidential candidates and procedures for election, as well as the President's powers and responsibilities as "functions of the executive". These include signing treaties and other agreements with foreign countries and international organizations; administering national planning, budget, and state employment affairs; and appointing ministers subject to the approval of Parliament.[2]

Unlike the executive in other countries, the President of Iran does not have full control over Iran's foreign policy, the armed forces, or nuclear policy, as these are ultimately under the control and are the responsibility of the Supreme Leader.[3]

The President of Iran is elected for a four-year term by the direct vote of the people and may not serve for more than two consecutive terms or more than 8 years.

The current President of Iran is Hassan Rouhani, who assumed office on August 4, 2013, after the 2013 Iranian presidential election. He succeeded Mahmoud Ahmadinejad, who served 8 years in office from 2005 to 2013.

After the Iranian Revolution of 1979 and referendum to create the Islamic Republic on March 29 and 30, the new government needed to craft a new constitution. Ayatollah Ruhollah Khomeini, ordered an election for the Assembly of Experts, the body tasked with writing the constitution.[4] The assembly presented the constitution on October 24, 1979, and Supreme Leader Ruhollah Khomeini and Prime Minister Mehdi Bazargan approved it.

The first Iranian presidential election was held on January 25, 1980 and resulted in the election of Abulhassan Banisadr with 76% of the votes. Banisadr was impeached on June 22, 1981 by Parliament. Until the early election on July 24, 1981, the duties of the President were undertaken by the Provisional Presidential Council. Mohammad-Ali Rajai was elected President on July 24, 1981 and took office on August 2. Rajai was in office for less than one month because he and his prime minister were both assassinated. Once again a Provisional Presidential Council filled the office until October 13, 1981 when Ali Khamenei was elected president.

The election on August 3, 2005 resulted in a victory for Mahmoud Ahmadinejad. The election on June 12, 2009 was reported by government authorities as a victory for Mahmoud Ahmadinejad, the incumbent candidate, although this is greatly disputed by supporters of rival candidates, who noted the statistical anomalies in voting reports and large-scale overvoting in the officially announced tallies.[5]

The President of Iran is elected for a four-year term in a national election by universal adult suffrage for everyone of at least 18 years of age.[6] Candidates for the presidency must be approved by the Council of Guardians, a twelve-member body consisting of six clerics (selected by Iran's Supreme Leader) and six lawyers (proposed by the head of Iran's judicial system and voted in by the Parliament).[7] According to the Constitution of Iran candidates for the presidency must possess the following qualifications:

Within these guidelines the Council vetoes candidates who are deemed unacceptable. The approval process is considered to be a check on the president's power, and usually amounts to a small number of candidates being approved. In the 1997 election, for example, only four out of 238 presidential candidates were approved by the council. Western observers have routinely criticized the approvals process as a way for the Council and Supreme Leader to ensure that only conservative and like-minded Islamic fundamentalists can win office. However, the council rejects the criticism, citing approval of reformists in previous elections. The council rejects most of the candidates stating that they are not "a well-known political figure", a requirement by the current law.

The President must be elected with a simple majority of the popular vote. If no candidate receives a majority in the first round, a runoff election is held between the top two candidates. 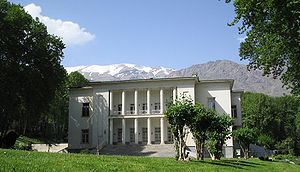 I, as the President, upon the Holy Qur'an and in the presence of the Iranian nation, do hereby swear in the name of Almighty God to safeguard the official Faith, the system of the Islamic republic and the Constitution of the country; to use all my talents and abilities in the discharge of responsibilities undertaken by me; to devote myself to the service of the people, glory of the country, promotion of religion and morality, support of right and propagation of justice; to refrain from being autocratic; to protect the freedom and dignity of individuals and the rights of the Nation recognized by the Constitution; to spare no efforts in safeguarding the frontiers and the political, economic and cultural freedoms of the country; to guard the power entrusted to me by the Nation as a sacred trust like an honest and faithful trustee, by seeking help from God and following the example of the Prophet of Islam and the sacred Imams, peace be upon them, and to entrust it to the one elected by the Nation after me.

The Guardian Council, a 12-member body consisting of six jurists and six theologians, was tasked with vetting hopefuls for their qualifications and confirming the election results. After the council's screening process, eight candidates were approved to run for office from the more than 680 candidates who had registered for the election.[12] After the withdrawal of Gholam-Ali Haddad-Adel and Mohammad Reza Aref, the number of candidates was reduced to six: Mohammad Bagher Ghalibaf, Mohammad Gharazi, Saeed Jalili, Mohsen Rezaee, Hassan Rouhani, and Ali Akbar Velayati. Last President Mahmoud Ahmadinejad was ineligible to run for re-election as he was limited to two terms or 8 years in office under the Iranian constitution. 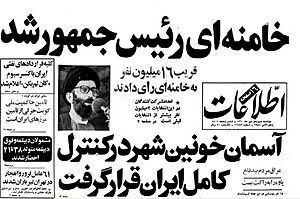 Ettela'at Paper news Khamenei was voted as President of Iran - 1981