The President of Latvia (Latvian: Latvijas Valsts prezidents), is head of state and commander-in-chief of the armed forces of the Republic of Latvia.

The term of office is four years. Before 1997, it was three years. He or she may be elected any number of times, but not more than twice in a row.[2] In the event of the vacancy in the office of the President, the Speaker of the Saeima assumes the duties of the President. For example, after the death of Jānis Čakste the Speaker of the Saeima, Pauls Kalniņš, was acting president briefly in 1927, before a new President could be elected.

Unlike his Estonian counterpart, the Latvian president's role is not entirely ceremonial. However, he is not as powerful as the President of Lithuania. The official Latvian term Valsts prezidents literally means 'State President'. 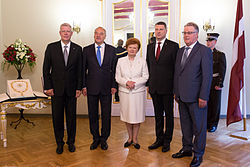 The five most recent presidents of Latvia in 2015