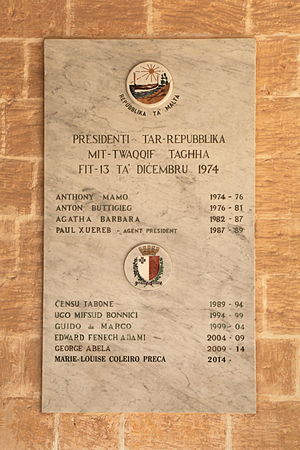 List of Presidents of Malta at San Anton Palace

The President of Malta (Maltese: President ta' Malta) is the constitutional head of state of Malta. The President is appointed by a resolution of the House of Representatives of Malta for a five-year term, taking an oath to "preserve, protect and defend" the Constitution.[2] The President of Malta also resides directly or indirectly in all three branches of the state. They are part of Parliament and responsible for the appointment of the judiciary. Executive authority is nominally vested in the President, but is in practice exercised by the Prime Minister.[3]

A person shall not be qualified to be appointed President if:

Before assuming office the nominee must take the oath of office before the House of Representatives of Malta.

The oath reads: I, (name of nominee), solemnly swear/affirm that I will faithfully execute the office of President (perform the functions of the President) of Malta, and will, to the best of my ability preserve, protect and defend the Constitution of Malta. (So help me God).

Whenever the office of President is temporarily vacant; until a new President is appointed; and whenever the holder of the office is absent from Malta, on vacation, or is for any reason unable to perform the functions conferred upon them by the Constitution, those functions are performed by an individual appointed by the Prime Minister, after consultation with the Leader of the Opposition, or by the Chief Justice.

Role of the president

Among the powers of the president:

The Role of the President is detailed in a publication (in the Maltese language) called Il-Manwal tal-President tar-Repubblika written by former President Ugo Mifsud Bonnici.

The official office of the president is the Grandmaster's Palace in Valletta. Other presidential residences include:

The President of Malta used the national flag as their presidential standard prior to 12 December 1998, when a proclamation established the Presidential Flag of Malta. The flag is flown on the President's official residences and offices and on all occasions at which they are present.[4]

The office of President shall become vacant: