The President of Mongolia (Mongolian: Монгол Улсын Ерөнхийлөгч, Mongol Ulsyn Yerönkhiilögch) is the head of state of Mongolia.[1] The Constitution of Mongolia implements a parliamentary system, so while he or she does wield significant political power, much of the President's role is ceremonial.

In 1988, Mr. Elbegdorj helped organize the first non-communist democratic political movement to create the Mongolian Democratic Union.[2] Mongolia became a democratic country in 1990 and in 1992 held its first national elections.[3]

Modern relations with the United States started in the early 1990s. Then-U.S. President George H.W. Bush sent his Secretary of State, James A. Baker III, to Mongolia to express support for Mongolia's transition to a democratic government.[2]

President Elbegdorj has been known to quote former U.S. president Ronald Reagan as his inspiration for anti-communism and pro-democracy views.[2]

In September 2012, President Elbegdorj addressed the 67th regular session of the United Nations General Assembly. In his address, he said that his main objective in his goal in transforming Mongolia to a democracy was to create a civil society ruled by law.[5] 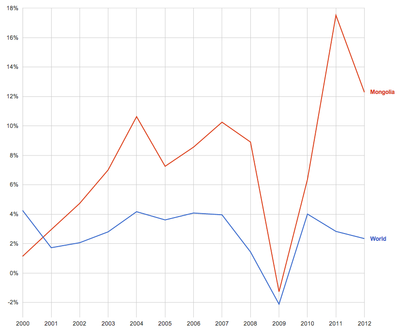 Graph compares the GDP growth rate of Monglia and the world at-large. Data provided by the World Bank. Obtained through open-source Google Public Data at https://www.google.com/publicdata/.

President Elbegdorj has pushed for decentralizing budget decisions.[6] His agenda has included anti-corruption and economic growth policies, and Mongolia's economy grew by 17 percent in 2011 and 12 percent in 2012.[3]

Under President Elbegdorj, the country is governed by the rule of law and the government imposes strict punishments for corruption, according to Forbes magazine.[5]

The World Bank forecasted the country's 2013 economic growth at 12.5 percent.[7]

The International Monetary Fund (IMF) has listed Mongolia as one of the world's five fastest-growing economies and expects Mongolia to be the number one fastest-growing economy in the world over the next decade.[3] Economist expect that Mongolia's economy will grow by over 15 percent in 2014.[8] Mongolia is rich in mining resources equivalent to approximately $2 trillion.[8]

Powers of the President

There is debate about who should be considered the first President of Mongolia. The title does not actually date back to before Mongolia's democratisation, but the office itself is seen as extending through Mongolia's period of communist rule. Sometimes, the Bogd Khan (seen as the reincarnations of senior lama) are seen as Mongolia's first "presidents", but more commonly, the title is given to the secular leaders who followed them. Balingiin Tserendorj, who was acting head of state in 1924, is sometimes seen as the first president, but it was not until Navaandorjiin Jadambaa was appointed Chairman of the State Great Khural in November that there was an official leader. Only a day later, the leadership role was reorganized as the Chairman of the Presidium of the State Little Khural (the Little Khural being the executive committee of the Great Khural). Later, the Little Khural was abolished, and its powers were returned to the Great Khural – as such, the title of the president became Chairman of the Presidium of the State Great Khural. This was shortly afterwards changed to Chairman of the Presidium of the People's Great Khural, following a change in nomenclature. Finally, in 1990, the title President of Mongolia was adopted.

Further information: List of heads of state of Mongolia