The President of Pakistan (Urdu: صدر مملکت پاکستان‎ — Ṣadr-e Mumlikat-e Pākistān, Urdu pronunciation: [ˌsəd̪ˈr-eː ˈmʊm.lɪˌkət̪-e pɑː.kɪs.t̪ɑːn]), the ceremonial head of state of Pakistan and a figurehead who represents the "unity of the Republic."[2] The President holds the legal title de jure and is a civilian commander-in-chief of the Pakistan Armed Forces as per the constitution of Pakistan.[3]

This position places its holder in leadership of the nation, and is kept informed by the Prime Minister of Pakistan on all matters of internal and foreign policy, as well as on all legislative proposals.[4] The Constitution of Pakistan vests the President the powers of granting pardons, reprieves, and the control of the military; however, all appointments at higher commands of the military must be made by the President on a "required and necessary" basis, upon consultation and approval from the Prime Minister.[5] In addition, the constitution prohibits the President from exercising the authority of running the government.[6]

The president is indirectly elected by the Parliament through the Electoral College for a five-year term. The Constitution requires the President to be a "Muslim of not less than forty-five years of age". The President resides in an estate in Islamabad known as Aiwan-e-Sadaṝ (lit. Presidency). The current President is Mamnoon Hussain, who was elected on 9 September 2013.

Role of the president

File:Pakistan cavalry honor guard.jpeg
The Ceremonial guard of honour at the Aiwan-e-sadr.

The official residence and principal workplace of the president is the Aiwan-e-Sadr— the presidential palace located in northeastern Islamabad. The presidency forms the vital institutional organ of state and is part of the bicameral Parliament.[7]

Powers to exercise the authority are limited to the ceremonial figurehead, and required to address the Parliament to give a direction for national policies before being informed of its key decisions.[8][9][10]

In addition, the President is also a civil commander-in-chief of the military, with Chairman joint chiefs being its chief military adviser to maintain the control of the military.[11] After a thorough confirmation comes from the Prime Minister, the President confirms the judicial appointments in the national court system.[12][13] In addition, the Constitution allows the President to grant pardons, reprieves, and clemency in cases recommended to him by the executive and the judiciary.[14] The President himself has absolute constitutional immunity from criminal and civil proceedings, and no proceedings can be initiated or continued against him during the term of his office.[15]

There shall be a President of Pakistan who shall be the Head of State and shall represent the "unity of the Republic."

From 2000 until 2009, the President was the chairman of the National Security Council who had authority and control over the nuclear and strategic arsenals; however, the chairmanship and the powers transferred back to Prime Minister.[17] Furthermore, the presidential powers have significantly declined with Pakistan's government reversed to a parliamentary democratic republic.[18]

The Constitution of Pakistan sets the principle qualifications that the candidate must meet to be eligible to the office of the President.[19] A President has to be:

Whenever the Aiwan-e-Sadr becomes vacant, the selection of president is done by the electoral college, which consists of both houses of Parliament (the Senate and National Assembly) and the four provincial assemblies.[20] The Chief Election Commissioner has to conduct elections to the office of the President in a special session.[21] Voting takes place in secrecy.[22]

The actual calculation for votes cast by a particular state is calculated by dividing the state's population by numbers of seat, which is divided again by the number of legislators from the state voting in the electoral college.[22] The constitution further states that election to the office of President will not be held earlier than sixty days and not later than thirty days before the expiration of the term of the President in office.[22]

The president is elected indirectly for a term of five years.[23] The incumbent president is eligible for re-election to that office, but cannot hold that office for more than two consecutive terms.[24] The president is required to make and subscribe in the presence of the Chief Justice—, an oath or affirmation that the president shall protect, preserve and defend the Constitution as follows:

I,Ahmad Jamal, do solemnly swear that I am a Muslim and believe in the Unity and Oneness of Almighty Allah, the Books of Allah, the Holy Qura'an being the last of them, the Prophethood of Muhammad (peace be upon him) as the last of the Prophets and that there can be no Prophet after him, the Day of Judgment, and all the requirements and teachings of the Holy Quran and Sunnah:

That I will bear true faith and allegiance to Pakistan:

That, as President of Pakistan, I will discharge my duties, and perform my functions, honestly, to the best of my ability, faithfully in accordance with the Constitution of the Islamic Republic of Pakistan and the law, and always in the interest of the sovereignty, integrity, solidarity, well- being and prosperity of Pakistan:

That I will not allow my personal interest to influence my official conduct or my official decisions:

That I will preserve, protect and defend the Constitution of the Islamic Republic of Pakistan:

That, in all circumstances, I will do right to all manner of people, according to law, without fear or favour, affection or ill- will:

And that I will not directly or indirectly communicate or reveal to any person any matter which shall be brought under my consideration or shall become known to me as President of Pakistan, except as may be required for the due discharge of my duties as President.
— Article 42 in Chapter 1: The President in Part III: The Federation of Pakistan in the Constitution of Pakistan

Line of succession and removal

Main article: Line of succession to the President of Pakistan

The Constitution discusses the possibility of an acting president.[25] Certain office-holders, however, are permitted to stand as Presidential candidates in case of vacancy as the constitution does not allow for a vice president:

The impeachment process may start in either of the two houses of the Parliament. The house initiates the process by leveling the charges against the President.[28] The charges are contained in a notice that has to be signed by either the Chairman or the Speaker National Assembly through a two-third majority.[28] The notice is sent up to the President, and 14 days later it is taken up for consideration.[29]

A resolution to impeach the President has to be passed by the two-third majority.[30] The Speaker National Assembly then summons the joint session not earlier than seven days.[31] The President has the right to defend oneself.[32]

If the resolution is passed by the two-third majority at the joint session declaring that the President is unfit to hold the office due to incapacity or is guilty of violating the Constitution or of gross misconduct, then the President shall cease to hold office immediately on the passing of the resolution.[33] 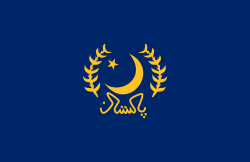 From 1947 until 1956, the Governor-General of Pakistan acted for the head of state: King George VI (until 1952) and Queen Elizabeth II (from 1952). With the promulgation of the first Constitution, Pakistan became an Islamic republic in 1956, and the Governor-General was replaced with the presidency. The incumbent Governor-General, Iskander Ali Mirza, became Pakistan's first president. He reportedly suspended the first Constitution in 1958, and appointed Army Commander-in-Chief General Ayub Khan as the first chief martial law administrator. Khan subsequently dismissed Mirza in order to become the president.

The second Constitution introduced by President Ayub Khan turned the country into a presidential republic without direct elections. Succumbing to internal and international pressure, however, Khan held a nationwide presidential election in 1965. Khan successfully campaigned against his opponent, Fatima Jinnah, for a second term, but some have alleged that elections were rigged in favour of Khan.

Controversy regarding the U-2 incident (1960), privatization (1963), and war with India (1965), fueled a fierce left-wing opposition movement led by Zulfikar Ali Bhutto of the PPP and Bengali nationalist Sheikh Mujibur Rahman who, with the support of demonstrators, aimed to further weaken the presidency. Suffering from paralysis and declining health, Ayub Khan handed over the presidency to army chief General Yahya Khan, who imposed martial law and announced that nationwide elections would be held in 1970. Eventually, general elections were held in 1970 which saw the PPP gaining a majority of seats in Pakistan and the Awami League gaining a majority in East Pakistan.

After he was unable to reach a compromise between the PPP and the Awami League, President Yahya Khan invited Nurul Amin of the Pakistan Muslim League to become the Prime Minister, and also appointed him as the first Vice President. The growing instigated violence against Pakistanis in East Pakistan forced President Yahya Khan to use force in order to maintain order there, which further escalated Bengali resistance (1970). Preemptive strikes against India led to another war in 1971, which freed East Pakistan and created Bangladesh.

Taking personal responsibility for the political isolation and devastation of Pakistan after the fall of East Pakistan, President Yahya Khan stepped down and ceded power to Zulfikar Ali Bhutto. President Bhutto created the current Constitution of Pakistan in 1973, transforming Pakistan into a parliamentary democracy, and reducing presidential powers to that of a ceremonial figurehead.

Following the new elections held in 1993, Prime Minister Benazir Bhutto established a strong government after appointing loyalist Farooq Leghari to the presidency. However, the corruption charges and the controversial death of Murtaza Bhutto in 1996 resulted in President Farooq Leghari dismissing Prime Minister Benazir Bhutto. In 1997, President Farooq Leghari could not overcome the heavy mandate bestowed on Prime Minister Nawaz Sharif by the public in 1997. President Leghari unsuccessfully supported Chief Justice Sajjad Ali Shah— both of them resigned, ending the conflict between the Judiciary, the Executive, and the Parliament. After appointing Rafiq Tarar, the Parliament successfully passed constitutional amendment to decisively limit the presidency. After staging a controversial self coup in 1999, General Pervez Musharraf dismissed Prime Minister Nawaz Sharif and President Rafiq Tarar in 2001 while assuming more powers to the presidency. In January 2004, the Electoral College elected Musharraf, and as a result he was, according to the Constitution, "deemed to be elected".[36]

President Musharraf's repeated unconstitutional intervention resulted in a standoff with the Judiciary, and declared a state of emergency in 2007, after dismissing the senior justices of the Supreme Court. Although Musharraf was elected in 2007, the constitutional legality of Musharraf's rule was found dubious. A populist constitutional movement eventually resulted in Musharraf's departure. On 22 August 2008, the electoral commission called for presidential nominations to be delivered by 26 August 2008 and for elections to be held on 6 September 2008.[37][38]

After the presidential election held in 2008, Asif Ali Zardari lobbied for constitutional amendment to restore the Constitution as it was in 1973.[39][40][41][42] In 2010, the Parliament unanimously and with a large majority, passed the eighteenth amendment of the constitution. It revoked the presidential powers and changed Pakistan from a semi-presidential system of government to a parliamentary republic, with great hopes of governmental stability in the future. On 9 September 2013, Mamnoon Hussain became president.