From Infogalactic: the planetary knowledge core
Jump to: navigation, search
For a list of the presidents of Poland, see List of heads of state of Poland.

The President of the Republic of Poland (Polish: Prezydent Rzeczypospolitej Polskiej, shorter form: Prezydent RP) is the Polish head of state. His or her rights and obligations are determined in the Constitution of Poland. The president heads the executive branch. In addition the president has a right to dissolve the parliament in certain cases,[1] and represents Poland in the international arena.

The first president of Poland, Gabriel Narutowicz, was sworn in as president of the Second Republic on 11 December 1922. He was elected by the National Assembly (the Sejm and the Senate) under the terms of the 1921 Constitution of Poland. Previously Józef Piłsudski had been "Chief of State" (Naczelnik Państwa) under the provisional 1919 Constitution. In 1926, Piłsudski. who was fed up with regional bickering, staged a coup deposed the president and had the National Assembly elect a new one, Ignacy Mościcki, under the thumb of Sanacja. Just before Piłsudski died, parliament passed the 1935 April Constitution of Poland which incorporated Piłsudski's ideals, but was not in accord with the amendment procedures of the 1921 Constitution.[2] Mościcki continued as president until he resigned following the German invasion of Poland in 1939. Mościcki and his government went into exile first into Romania, where Mościcki was interned, then to Angers in France where Władysław Raczkiewicz, at the time the Speaker of the Senate, assumed the presidency following Mościcki's resignation on 29 September 1939,[3] and then on to London. The transfer from Mościcki to Raczkiewicz was in accordance with Article 24 of the 1935 April Constitution.[4][5]

Following the invasion of Poland by the Red Army in 1944, Bolesław Bierut assumed the reins of government, and in July 1945 was internationally recognized as the head of state, but it wasn't until 1947 when the Sejm passed an interim constitution based in part on the March 1921 constitution, that Bierut was elected president by the Sejm, the Senate having been abolished the previous year by the Polish people's referendum, 1946. He served until the 1952 Constitution eliminated the office of the president.[6]

Following the 1989 amendments to the constitution which restored the presidency,[7] Wojciech Jaruzelski, the existing head of state, took office. In Poland's first direct presidential election, Lech Wałęsa won and was sworn in on 22 December 1990. The office of the president was continued in the Constitution of 1997, which now provides the requirements for, the duties of and the authority of the office.

The President of Poland is elected directly by the people to serve for five years and can be reelected only once. Pursuant to the provisions of the Constitution, the President is elected by an absolute majority of valid votes. If no candidate succeeds in passing this threshold, a second round of voting is held with the participation of the two candidates who received the largest and second largest number of votes respectively.

In order to be registered as a candidate in the presidential election, one must be a Polish citizen, be at least 35 years old on the day of the first round of the election and collect at least 100,000 signatures of voters. 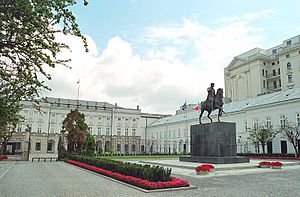 Presidential Palace on Krakowskie Przedmieście in Warsaw, with equestrian statue of Prince Józef Poniatowski by Bertel Thorvaldsen. Official seat of the presidency.

The President has a free choice in selecting the Prime Minister, yet in practice he usually gives the task of forming a new government to a politician supported by the political party with the majority of seats in the Sejm (usually, though not always, it is the leader of that political party).

The President has the right to initiate the legislative process. He also has the opportunity to directly influence it by using his veto to stop a bill; however, his veto can be overruled by a three-fifths majority vote in the presence of at least half of the statutory number of members of the Sejm (230). Before signing a bill into law, the President can also ask the Constitutional Tribunal to verify its compliance with the Constitution, which in practice bears a decisive influence on the legislative process.

In his role as supreme representative of the Polish state, the President has power to ratify and revoke international agreements, nominates and recalls ambassadors, and formally accepts the accreditations of representatives of other states. The President also makes decisions on award of highest academic titles, as well as state distinctions and orders. In addition, he has the right of clemency, viz. he can dismiss final court verdicts (in practice, the President consults such decisions with the Minister of Justice). 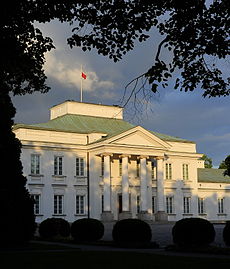 The Belweder Palace, often known simply as 'The Belweder', is the traditional and current official residence of the President.

Several properties are owned by the Office of the President and are used by the Head of State as his or her official residence, private residence, residence for visiting foreign officials etc. 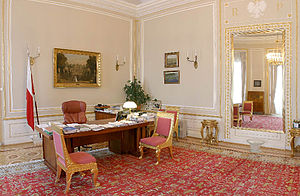 The office of the president at the Presidential Palace in Warsaw.
Main article: Acting President of Poland

The constitution states that the President is an elected office, there is no directly elected presidential line of succession. If the President is unable to execute his/her powers and duties, the Marshal of the Sejm will have the powers of a President for a maximum of 60 days until elections are called.

On 10 April 2010 a plane carrying Polish President Lech Kaczyński, his wife, and 94 others including many Polish officials crashed near Smolensk-North Airport in Russia. There were no survivors.[8] Bronisław Komorowski took over acting presidential powers following the incident. On 8 July Bronislaw Komorowski resigned from marshal power after winning the presidential election. According to the constitution, the acting president then became the Marshal of the Senate, Bogdan Borusewicz. In the afternoon Grzegorz Schetyna was elected as a new Marshal of the Sejm and he became acting president. Schetyna served as the interim head of state until Komorowski's swearing-in on 6 August.

For the list of former presidents of Poland, see the List of heads of state of Poland.

Within Poland, former presidents are entitled to lifetime personal security protection by Biuro Ochrony Rządu officers, in addition to receiving a substantial pension and a private office. On 10 April 2010, Lech Kaczyński, president at the time, and Ryszard Kaczorowski, the last president-in-exile although not internationally recognized, died in the crash of the Polish Air Force Tu-154 en route to Russia.[9]

As of 2015, three former Presidents of Poland are alive: