President of the Church (LDS Church)

Latter-day Saints consider the church's president to be God's spokesman to the entire world and the highest priesthood authority on earth, with the exclusive right to receive revelations from God on behalf of the entire church or the entire world. 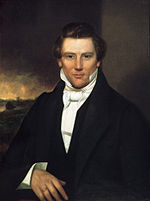 Joseph Smith, the founder of the Latter-day Saint movement

The concept that the Church of Christ would have a single presiding officer arose in late 1831. Initially, after the church's formation on April 6, 1830, Joseph Smith referred to himself as "an apostle of Jesus Christ, and elder of the church."[1] However, there was another apostle—Oliver Cowdery—and several other elders of the church, making the formal hierarchy of the church unclear.

In September 1830, after Hiram Page claimed to have received revelations for the church, a revelation to Smith stated that "no one shall be appointed to receive commandments and revelations in this church excepting my servant Joseph Smith, Jun., for he receiveth them even as Moses."[2] This established Smith's exclusive right to lead the church.

In early June 1831,[lower-alpha 1] Smith was ordained to the "high priesthood",[lower-alpha 2][lower-alpha 3] along with twenty-two other men, including prominent figures in the church such as Hyrum Smith, Parley P. Pratt, and Martin Harris.[3][4] As "high priests", these men were higher in the priesthood hierarchy than the elders of the church. However, it was still unclear whether Smith's and Cowdery's callings as apostles gave them superior authority to that of other high priests.

In 1835, the "Articles and Covenants of the Church of Christ" were revised,[citation needed] changing the phrase "an ... elder of the church" to "the first elder of this Church."[7] Thus, subsequent to 1835, Smith was sometimes referred to as the "First Elder" of the church. The 1835 revision also added a verse referring to the office of "president of the high priesthood (or presiding elder)",[8] which had since been added to the church hierarchy.

In 1844, while in jail awaiting trial for treason charges, Joseph Smith was killed by an armed mob. Hyrum Smith, his presumed successor, was killed in the same incident. Smith had not indisputably established who was next in line as successor to President of the Church. Several claimants to the role of church president emerged during the succession crisis that ensued.

Main articles: Thomas S. Monson and List of presidents of The Church of Jesus Christ of Latter-day Saints

Thomas S. Monson is the 16th and current President of the LDS Church. As president, Monson is considered by adherents of the religion to be a "prophet, seer, and revelator" of God's will on earth. A printer by trade, Monson has spent most of his life engaged in various church leadership positions and in public service.

Succession to the presidency

Since the late-19th century, the Quorum of the Twelve has moved quickly to reconstitute the First Presidency within days or weeks of the late church president's death. However, Brigham Young presided over the church for three years as the President of the Quorum of the Twelve before the First Presidency was reconstituted after the death of Joseph Smith. The tradition of waiting for two to three years before selecting a new president continued until the 1898 death of the fourth president of the church, Wilford Woodruff. Since that time, the surviving apostles have typically met in the Salt Lake Temple on the Sunday following the late president's funeral, to select and set apart the next president of the church.[lower-alpha 5] At the next regularly scheduled general conference, the membership of the church have the opportunity of sustaining their new leader by common consent, at a special conference session referred to as a "solemn assembly."

Seniority in the Quorum of the Twelve Apostles

Seniority in the Quorum of the Twelve Apostles is important, as the senior apostle presides over the quorum and becomes the president of the church upon the current president's passing. Specific rules have been applied to unusual situations that have arisen over time, including when a member is removed from the quorum by disfellowshipment or excommunication and is later restored to the quorum. It was decided that in these cases, the removed apostle loses his seniority in the quorum.[lower-alpha 6] Later, whether or not an apostle was a member of the quorum and when the apostle was added as a member of the quorum became an important factor.[lower-alpha 7][lower-alpha 8]

When the church president is speaking in his official capacity, his words are not considered "infallible".[19] Members of the church are considered not fully justified in their actions if they "blindly" follow the president.[20][21] The church has counseled its members that they should reject statements that contradict what is found in church scriptures, "regardless of the position of the man who says it".[22] Instructions given, or positions taken, by the president of the church can be changed by a future president of the church; due to the Latter-day Saint belief in "continuing revelation", it is accepted that a church president will occasionally revise or clarify instructions of past church presidents. One apostle of the church counseled to "beware of those who would pit the dead prophets against the living prophets, for the living prophets always take precedence."[23]

Not everything the prophet says is considered to be doctrine. Joseph Smith taught "a prophet is a prophet only when he was acting as such."[24] When the church president declares new doctrine, "he will declare it as revelation from God, and it will be so accepted by the Council of the Twelve and sustained by the body of the Church."[25] If the doctrine is not accepted by the church as the word of God, members are not bound by the doctrine,[26] even if it comes from the President of the Church.[27]

Presidents of the church have taught that God will never allow the president to lead the Latter-day Saints astray and that God will "remove" any man who stands at the head of the church who intends to mislead its members.[30] This is not a statement of belief that they are "infallible",[31] but that their errors will not result in "the permanent injury of the work."[32][33][34] Thus, the current prophet can clarify, correct or change any previous teachings.[23]

Counselors to the President

Current counselors in the
First Presidency

Though there has never been a popular movement in the church to have a president removed or punished, he could theoretically be removed from his position or otherwise disciplined by the Common Council of the Church.[35] The only president of the church brought before the Common Council was Joseph Smith, who was tried for charges made against him by Sylvester Smith after the return of Zion's Camp in 1834.[36] The Council determined that Joseph Smith had "acted in every respect in an honorable and proper manner with all monies and properties entrusted to his charge."[37]