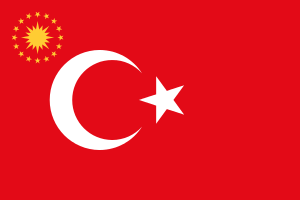 The roots of the Presidential Seal and Presidential Flag of Turkey go back to September 1922, when a similar flag was used on the automobile that took Mustafa Kemal Atatürk to İzmir during the final days of the Turkish War of Independence.[1] This flag is currently on display at the Anıtkabir Museum in Ankara.[1] The Presidential Flag's characteristics and proportions were legalized with the Sancak Talimatnamesi law on October 22, 1925.[1] According to this law, the Presidential Seal's dimensions were defined as "70cm x 70cm", while the Sun in the center (which looked similar to the current one) was a 20-pointed star containing 10 sharp-edged and 10 oval-edged light rays.[1] The "70cm x 70cm" dimensions of the Presidential Seal were maintained in the Turkish Flag Law of May 29, 1936; but were later reduced to "30cm x 30cm" with a new legal amendment that was made on September 14, 1937.[1] The number of the light rays in the Sun of the Presidential Seal were reduced to 16 (8 long and 8 short light rays, all of them sharp-edged) in order to symbolize the 16 Turkic states in history, with another legal amendment on February 18, 1978.[1] The seal and flag took their current shape and proportions with the final legal amendment on January 25, 1985.[1]

The so-called 16 Great Turkic Empires are a Pan-Turkist concept introduced in 1969 by Akib Özbek.[2] [3] Its association with the seal was introduced in 1985, under president Turgut Özal.[4][3] Prior to this assertion, the 16 stars had been taken as representing sixteen medieval beyliks which succeeded the Seljuk Empire.[5]