The Presidential Unit Citation (PUC), originally called the Distinguished Unit Citation, is awarded to units of the United States Armed Forces, and those of allied countries, for extraordinary heroism in action against an armed enemy on or after 7 December 1941 (the date of the Attack on Pearl Harbor and the start of American involvement in World War II). The unit must display such gallantry, determination, and esprit de corps in accomplishing its mission under extremely difficult and hazardous conditions so as to set it apart from and above other units participating in the same campaign.

Since its inception by Executive Order on 26 February 1942, retroactive to 7 December 1941, to 2008, the Presidential Unit Citation has been awarded in conflicts such as World War II, the Korean War, the Vietnam War, Iraq War, and the War in Afghanistan.

The collective degree of valor (combat heroism) against an armed enemy by the unit nominated for the PUC is the same as that which would warrant award of the individual award of the Distinguished Service Cross, Air Force Cross or Navy Cross. In some cases, one or more individuals within the unit may have also been awarded individual awards for their contribution to the actions for which their entire unit was awarded a Presidential Unit Citation. The unit with the most Presidential Unit Citations is the USS Parche (SSN-683) with 9 citations.[2]

The Army citation was established by Executive Order 9075 on 26 February 1942, superseded by Executive Order 9396 on Dec. 2, 1943, which authorized the Distinguished Unit Citation.[3][4] As with other Army unit citations, the PUC is in a larger frame than other ribbons, and is worn above the right pocket. All members of the unit may wear the decoration, whether or not they personally participated in the acts for which the unit was cited. Only those assigned to the unit at the time of the action cited may wear the decoration as a permanent award. For both the Army and Air Force, the emblem is a solid blue ribbon enclosed in a gold frame.

The Air Force PUC was adopted from the Army Distinguished Unit Citation after the Air Force became a separate military branch in 1947. By Executive Order 10694, dated Jan. 10, 1957 the Air Force redesignated the Distinguished Unit Citation as the Presidential Unit Citation.[5] The Air Force PUC is the same color and design as the Army PUC but slightly smaller, so that it can be worn in alignment with other Air Force ribbons on the left pocket following personal awards. As with the Army, all members of a receiving unit may wear the decoration while assigned to it, but only those assigned to the unit at the time of the action cited may wear the decoration as a permanent award or if any member of a receiving unit had it their last duty station prior to being either discharged or retired they may continue to wear the decoration as prescribed.

The Citation is carried on the receiving unit's colors in the form of a blue streamer, 4 ft (1.2 m) long and 2.75 in (7.0 cm) wide. For the Army, only on rare occasions will a unit larger than battalion qualify for award of this decoration.[4] 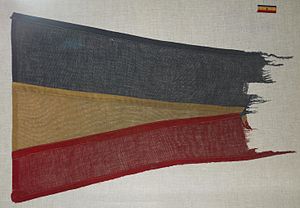 The Navy citation was established by Executive Order 9050 on 6 February 1942.

To commemorate the first submerged voyage under the North Pole by the nuclear-powered submarine USS Nautilus (SSN-571) in 1958, all members of her crew who made that voyage were authorized to wear their Presidential Unit Citation ribbon with a special clasp in the form of a gold block letter N.[7]

As of 2014, the same device may be awarded for the Nuclear Deterrence Operations Service Medal for those personnel who work in direct support of ICBM operations who serve 179 non-consecutive days dispatched to a missile complex.[8]

To commemorate the first submerged circumnavigation of the world by the nuclear-powered submarine Triton during its shakedown cruise in 1960, all members of her crew who made that voyage were authorized to wear their Presidential Unit Citation ribbon with a special clasp in the form of a golden replica of the globe.[9]

United States Coast Guard units may be awarded either the Navy or Coast Guard version of the Presidential Unit Citation, depending on which service the Coast Guard was supporting when the citation action was performed.

The current decoration is known as the "Department of Homeland Security Presidential Unit Citation". The original Coast Guard Presidential Unit Citation was established under the authority of Executive Order 10694 (signed by President Dwight D. Eisenhower on January 10, 1957), and amended by Section 74 of Executive Order 13286 (signed by President George W. Bush on February 28, 2003) to transfer the award of the USCG PUC to the Secretary of Homeland Security.

Two units of the Free French Forces were awarded Presidential Unit Citations during World War II. The first was the 2nd Armored Division, which received the award after the liberation of Strasbourg; the second was the 3rd Foreign Infantry Regiment, which received it in 1946 with the inscription 'Rhine-Bavarian Alps'.

On April 22, 1986, the 1st Fighter Group Força Aérea Brasileira (the Brazilian Air Force) was awarded the Presidential Unit Citation for its actions in the Po Valley region of Italy in World War II. The Brazilians, operating in Italy in support of Allied forces, destroyed in one day (April 22, 1945) over 45 vehicles, strafed pontoon bridges on the River Po (hampering a German retreat) and harassed fixed positions of the German forces. From the citation:

The casualties that they suffered reduced their pilot strength to about one half that of the United States Army Air Force squadrons operating in the same area, but they flew an equal number of sorties as their US counterparts...Eleven missions of 44 sorties were flown destroying nine motor transports and damaging 17. Additionally, they destroyed the facilities of a motor pool, immobilized 35 horse vehicles, damaged a road bridge and a pontoon bridge, destroyed 14 and damaged three enemy-occupied buildings, and attacked four military positions and inflicted much other damage.[citation needed]

The 1st Battalion, Gloucestershire Regiment and Troop C, 170th Independent Mortar Battery of the British Army were both awarded the Presidential Unit Citation for their defence of Hill 235 whilst surrounded by Chinese forces during the Battle of the Imjin River. The 2nd Battalion, Princess Patricia's Canadian Light Infantry and 3rd Battalion, Royal Australian Regiment were awarded the citation for their actions during the Battle of Kapyong, shortly afterwards.

One Belgian-Luxemburgian battalion of the Belgian United Nations Command (now the 3rd Parachute Regiment,) was awarded the Presidential Unit Citation once for actions during the Battle of the Imjin River.

The Colombia Battalion received the citation while attached to the American 21st Infantry Regiment in 1951.[68]

One Dutch unit, the Netherlands Detachment United Nations, part of the Regiment Van Heutsz, was awarded the Presidential Unit Citation twice for actions during the Korean War. The first citation was awarded after the battle near Wonju and Hoengson in February 1951. The unit was awarded a second time for its bravery during the Soyang River Battle in May–June 1951.

President Harry Truman signed a Distinguished Unit Citation (now the Presidential Unit Citation) on July 11, 1951, for the Turkish Brigade's acts of heroism. It reads: "The Turkish Brigade, a member of the United Nations Forces in Korea is cited for exceptionally outstanding performance of duty in combat in the area of Kumyangjang-ni, Korea, from 25 to 27 January 1951."

The Greek Expeditionary Force, Sparta Battalion, was awarded the Presidential Unit Citation for their actions in the defense of Outpost Harry while vastly outnumbered by Chinese forces, June 18, 1953.

The 2 Squadron SAAF of South Africa was awarded the honour, which was presented in August 1956.[69]

41 Commando,(Independent) Royal Marines was awarded the US Navy and Marine Corps PUC for its actions at the Chosin Reservoir while attached to the 1st Marine Division.

A Presidential Unit Citation was awarded to D Company, 6th Battalion, Royal Australian Regiment, on 28 May 1968, for the unit's actions at Long Tan, South Vietnam.

In 2012, the Presidential Unit Citation was awarded to the 4th contingent, CDT3 [Clearance Diving Team 3], Royal Australian Navy for service during the Vietnam War in 1968/69.

In 1971, the Presidential Unit Citation was awarded to the 3d Armored Cavalry Squadron, Army of the Republic of Vietnam and attached U.S. Advisor/Liaison Personnel for extraordinary heroism during the period 1 January 1968 to 30 September 1968 in actions in Pleiku and Binh Dinh Provinces. (DA General Order No. 24, 27 April 1971.)[45]

Units of the Army, 3rd battalion, 16th Artillery were awarded the presidential unit citation for actions during the January, 1968 Tet offensive in Vietnam. They provided sustained artillery fire under severe conditions that protected their own troops and prevented the attacking forces of North Vietnam and the Viet cong from retreating. The support they provided lasted for 72 hours, during which time the troops had no sleep and no time to eat. Some units of the 16th artillery received sniper and mortar fire but continued supporting troops in spite of the risks involved.

In 1973 the PUC was awarded to Carrier Air Wing Nine and USS Constellation for extrarodinary heroism. On May 10, 1972 VF-92 and VF-96 shot down 7 Migs tying the single day record of any air unit. Wing pilots received 5 Navy Crosses, and 24 Silver Stars.[74]

On December 7, 2004, the Combined Joint Special Operations Task Force-South, known as Task Force K-BAR, a special collection of U.S. and international special forces units, was awarded the Presidential Unit Citation. This award, for service between 17 October 2001 and 30 March 2002, was very unusual in that it was made to multiple international units fighting in the War in Afghanistan.[75]

The following units were recognized:

Operating first from Oman and then from forward locations throughout the southern and eastern regions of Afghanistan, successfully executed its primary mission to conduct special operations in support of the United States’ efforts to destroy, degrade, and neutralize the Taliban and Al-Qaeda leadership and military. During its six-month existence, this Task Force was the driving force behind extremely high-risk missions and unconventional warfare operations in Afghanistan. The sailors, soldiers, airmen, marines and coalition partners of CJSOTF-South established benchmark standards of professionalism, tenacity, courage, tactical brilliance, and operational excellence while demonstrating superb esprit de corps and maintaining the highest measures of combat readiness. By their outstanding courage, resourcefulness and aggressive fighting spirit in combat against a well-equipped, well-trained, and treacherous terrorist enemy, the officers and enlisted personnel of CJSOTF-South/Task-Force K-BAR reflected great credit upon themselves and upheld the highest traditions of the United States Armed Forces.[76]

In 2012, the Navy and Marine Corps Presidential Unit Citation was awarded and presented at the U.S. Embassy in Canberra to two members of the Australian Army for service as embedded members of the Marine Expeditionary Brigade-Afghanistan for outstanding performance in action against enemy forces from 29 May 2009 to 12 April 2010, in support of Operation Enduring Freedom.