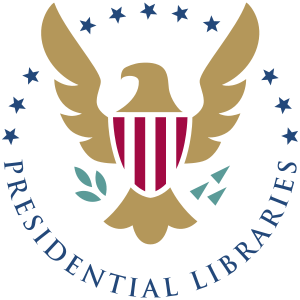 Official seal of the presidential libraries

In the United States, the presidential library system is a nationwide network of 13 libraries administered by the Office of Presidential Libraries, which is part of the National Archives and Records Administration (NARA). These are repositories for preserving and making available the papers, records, collections and other historical materials of every President of the United States since Herbert Hoover (31st President, 1929-1933).

Although not officially sanctioned and maintained by the NARA, libraries have been organized for several presidents who preceded the official start of the Presidential Library Office (i.e., those before President Hoover).

Recent U.S. presidents have established presidential libraries in their home states in which documents, artifacts, gifts of state and museum exhibits are maintained that relate to the former president's life and career both political and professional. Each library also provides an active series of public programs. When a president leaves office, the National Archives and Records Administration (NARA) establishes a presidential materials project to house and index the documents until a new presidential library is built and transferred to the federal government. The William J. Clinton Presidential Library became the eleventh presidential library on November 18, 2004, the Richard Nixon Presidential Library and Museum became the twelfth on July 11, 2007, and the George W. Bush Presidential Center became the thirteenth on May 1, 2013. Official fundraising for the 14th began in January 2014; the facility is expected to be open around 2020.

Presidential libraries outside of NARA

In May 2012, on the fiftieth anniversary of the founding of the Ulysses S. Grant Foundation, it selected Mississippi State University as the permanent location for Ulysses S. Grant's presidential library.[4] Historian John Simon edited Grant's letters into a 32-volume scholarly edition published by Southern Illinois University Press.[5]

Historically, all presidential papers were considered the personal property of the president. Some took them at the end of their terms, others destroyed them, and many papers were scattered.[7] Though many pre-Hoover collections now reside in the Manuscript Division of the Library of Congress,[8] others are split among other libraries, historical societies, and private collections. However, many materials have been lost or deliberately destroyed.

Lucretia Rudolph Garfield, the wife of James A. Garfield, President from March 4, 1881, until his death on September 19, 1881, added a Memorial Library wing, four years after his assassination, to their family home, Lawnfield, in Mentor, OH. The James A. Garfield National Historic Site is operated by the National Park Service and the Western Reserve Historical Society.

In 1939, President Franklin Delano Roosevelt donated his personal and presidential papers to the federal government. At the same time, Roosevelt pledged part of his estate at Hyde Park, New York to the United States, and friends of the President formed a non-profit corporation to raise funds for the construction of the library and museum building. Roosevelt's decision stemmed from his belief that Presidential papers were an important part of the national heritage and should be accessible to the public. He asked the National Archives to take custody of his papers and other historical materials and to administer his library.[7] On June 30, 2013, new interactive and multimedia exhibits developed by the National Archives and Records Administration (NARA) opened to the public as part of the first renovation of this library since its opening.[9]

In 1950, Harry S. Truman decided that he, too, would build a library to house his Presidential papers and helped to galvanize congressional action.

In 1955, Congress passed the Presidential Libraries Act of 1955, establishing a system of privately erected and federally maintained libraries. The Act encouraged other Presidents to donate their historical materials to the government and ensured the preservation of Presidential papers and their availability to the American people. Under this and subsequent acts, nine more libraries have been established. In each case, funds from private and non-federal public sources provided the funds to build the library. Once completed, the private organization turned over the libraries to the National Archives and Records Administration to operate and maintain.

Until 1978, Presidents, scholars, and legal professionals held the view dating back to George Washington that the records created by the President or his staff while in office remained the personal property of the President and were his to take with him when he left office. The first Presidential libraries were built on this concept. NARA successfully persuaded Presidents to donate their historical materials to the federal government for housing in a Presidential library managed by NARA.

The Presidential Libraries Act of 1986 made additional changes to Presidential libraries, requiring private endowments linked to the size of the facility. NARA uses these endowments to offset a portion of the maintenance costs for the library.

The thirteen presidential libraries maintain over 400 million pages of textual materials; nearly ten million photographs; over 15 million feet (5,000 km) of motion picture film; nearly 100,000 hours of disc, audiotape, and videotape recordings; and approximately half a million museum objects. These varied holdings make each library a valuable source of information and a center for research on the Presidency.

The most important textual materials in each library are those created by the President and his staff in the course of performing the official duties. Libraries also house numerous objects including family heirlooms, items collected by the President and his family, campaign memorabilia, awards, and the many gifts given to the President by American citizens and foreign dignitaries. These gifts range in type from homemade items to valuable works of art. Curators in Presidential libraries and in other museums throughout the country draw upon these collections for historical exhibits.

Other significant holdings include the personal papers and historical materials donated by individuals associated with the President. These individuals may include Cabinet officials, envoys to foreign governments, political party associates, and the President's family and personal friends. Several libraries have undertaken oral history programs that have produced tape-recorded memoirs. A third body of materials comprises the papers accumulated by the President prior to, and following, his Presidency. Such collections include documents relating to Roosevelt's tenure as Governor of New York and Dwight D. Eisenhower's long military career.

With the exception of John F. Kennedy and Lyndon B. Johnson, and upon their own deaths, Jimmy Carter and George W. Bush, every American president since Hoover is or has chosen to be buried at his presidential library. Kennedy is buried at Arlington National Cemetery; Johnson is buried at his ranch in the hill country of Texas, west of Austin; Carter plans to be buried near his home in Plains, Georgia.[10] George W. Bush has a burial plot in the Texas State Cemetery in Austin, Texas.[11]

Unlike all other Presidents whose libraries are part of the NARA system, Ford's library and museum are geographically separate buildings, located in different parts of Michigan; Ford is buried at his museum in Grand Rapids, while the library is in Ann Arbor.

Denotes libraries outside the NARA Presidential Library Office (these Presidents pre-date the administration of Herbert Hoover).

Where other presidents' papers may be found

Grover Cleveland and Woodrow Wilson left their papers to Princeton University where they may be found at the Seeley G. Mudd Manuscript Library. After the Theodore Roosevelt Association failed to get enough funds to start what would be the second presidential library after Rutherford Hayes', they donated his papers to Harvard University in 1943. These reside at its Houghton Library . James Buchanan left his papers to the Historical Society of Pennsylvania in Philadelphia, where they may still be found. In the 1960s, the University of Tennessee at Knoxville endeavored to collect all of Andrew Jackson's papers on Microfilm and the results are now available online. A similar project is underway on behalf of James Madison by the Universities of Virginia and Chicago. For many presidents, especially before the development of the NARA system, substantial collections may be found in multiple private and public collections.