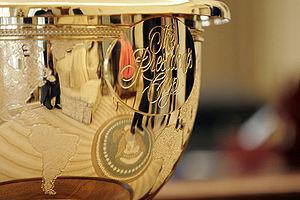 The scoring system of the event is match play. The format is drawn from the Ryder Cup and consists of 12 players per side. Each team has a non-playing captain, usually a highly respected golf figure, who is responsible for choosing the pairs in the doubles events, which consist of both alternate shot and best ball formats (also known as "foursome" and "fourball" matches respectively). Each match, whether it be a doubles or singles match, is worth one point with a half-point awarded to each team in the event of a halved match.

Until the 2005 event, prior to the start of the final day matches, the captains selected one player to play in a tie-breaker in the event of a tie at the end of the final match. Upon a tie, the captains would reveal the players who would play a sudden-death match to determine the winner. In 2003, however, the tiebreaker match ended after three holes because of darkness, and the captains, Gary Player and Jack Nicklaus. agreed that the Cup would be shared by both teams.[1]

The event was created and is organized by the PGA Tour.

There is no prize money awarded at the Presidents Cup. The net proceeds are distributed to charities nominated by the players, captains, and captains' assistants. The first 10 Presidents Cups raised over US$32 million for charities around the world.[5]

Of the 11 matches, the United States team has won 9, the International Team has won 1, with 1 match tied.