From Infogalactic: the planetary knowledge core
Jump to: navigation, search
For other uses, see Presidio (disambiguation). 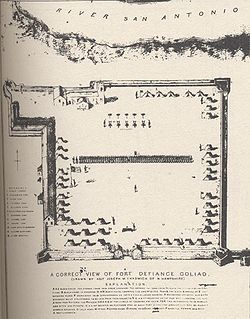 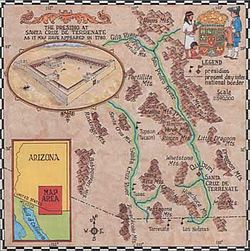 The Terrenate presidio in Arizona. 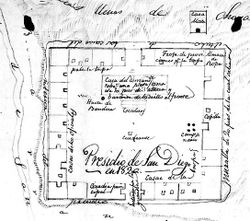 The San Diego presidio in California.

A presidio (from the Spanish, presidir, meaning "to preside" or "to oversee") is a fortified base established by the Spanish in areas under their control or influence.

The fortresses were built to protect against pirates, hostile Native Americans, and colonists from enemy nations. Later in western North America, with independence, the Mexicans garrisoned the Spanish presidios on the northern frontier and followed the same pattern in unsettled frontier regions like the Presidio de Sonoma, at Sonoma, California and the Presidio de Calabasas, in Arizona.

In western North America, a rancho del rey or king's ranch would be established a short distance outside a presidio. This was a tract of land assigned to the presidio to furnish pasturage to the horses and other beasts of burden of the garrison. Mexico called this facility "rancho nacional".[1]