From Infogalactic: the planetary knowledge core
Jump to: navigation, search
This article is about the Air Force base. For other areas, see Presque Isle (disambiguation). For the civil use of this facility and airport information, see Northern Maine Regional Airport at Presque Isle.

Presque Isle Air Force Base is a former United States Air Force base, located in the city of Presque Isle, Maine.

Presque Isle's commercial aviation began in 1933 with Boston & Maine Airways. In 1940, BMA changed their name to Northeast Airlines.[1] Northeast Airlines, continued to operate from the airfield during the war, and was contracted to run regular air service from Presque Isle to a large number of destinations in Canada, most of which were weather stations. 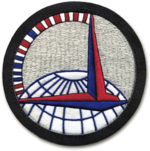 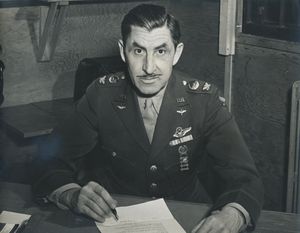 In 1941 the federal government appropriated the local airport, establishing Presque Isle Army Airfield for planes bound to and from Great Britain. Activated as an Army Air Corps military airfield on 15 September, Presque Isle became a vital air transport installation and the City found itself a busy war center. 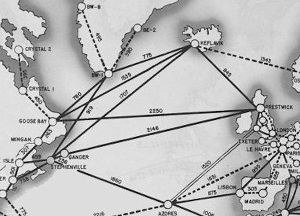 Together with Dow AAF in Bangor, the mission of Presque Isle was the delivery of Lend-Lease aircraft to the United Kingdom and as an Embarkation point for overseas movement of Army Air Forces personnel and equipment.

The first troops arrived in Presque Isle to start establishing the base on 15 September 1941. At that time, no military facilities existed and the men lived in tents and trailers.

The main Army Air Force unit at Presque Isle was the 23d AAF Ferrying Wing, assigned to the Air Transport Command. The unit was activated on 12 June 1942 and conducted aircraft ferrying to Europe and other transport operations. At the height of base activity during World War II, more aircraft flights flew from Presque Isle (via Greenland, Iceland or directly from Newfoundland) to Europe than from any other American base.[citation needed]

In July 1944, the mission of Presque Isle AAF was changed to that of a port of debarkation and caring for casualties from the front in France.

With the end of combat in Europe, beginning in June 1945, troops scheduled for redeployment from Europe to the South Pacific began arriving for training bases in the United States. With the end of the war in August 1945, this mission was terminated.

The aerial port at Presque Isle AAF was officially closed on 18 September and the airfield was de-activated on 20 September 1945 with the end of the war. The 716th Army Air Force Base Unit was assigned to the airfield with a mission of winterizing the buildings and storing equipment with the facility placed in reserve status, and was used as a communications facility. 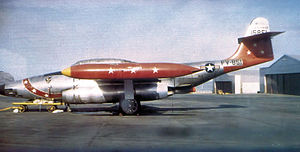 The airfield was reactivated by the United States Air Force and redesignated Presque Isle Air Force Base on January 12, 1948 and assigned to the Air Defense Command (ADC) Eastern Air Defense Force For much of the 1950s, Presque Isle AFB housed ADC fighter-interceptors.

The 23d Fighter-Interceptor Wing was assigned to Presque Isle on 10 November 1950. The wing flew North American F-86 Sabre, F-51 Mustang, and F-80 Shooting Stars from Presque Isle with the 74th and 75th Fighter-Interceptor Squadrons assigned. Its mission was to provide air defense for the northeastern United States during the Korean War and conduct basic training for about 500 Air Force recruits. The 23 FIW was inactivated February 6, 1952.

Upon the inactivation of the 82d FIS, the 76th Fighter-Interceptor Squadron was activated, assuming the equipment and personnel of the departed 82d. It remained at the base for just over two years, before also being reassigned to Pinecastle AFB, Florida on 8 November 1957.

The 23d Fighter Wing (Air Defense) was reactivated August 18, 1955, at Presque Isle with the 75th and 76th Fighter Squadrons assigned directly to wing. It flew Northrop F-89 Scorpions as part of the Air Defense Command until again inactivated July 1, 1959.

On March 21, 1957, the Air Force, acting on the recommendation of the Strategic Missile Site Selection Panel, designated Presque Isle, as the site for the first SM-62 Snark intercontinental cruise missile base. But in November 1959, within a year of Power's request for a program evaluation, Strategic Air Command recommended cancellation of Snark (the recommendation was endorsed by ARDC). Headquarters USAF, however, rejected that proposal. Despite General Power's recommendation, the Air Force and the Department of Defense decided to continue a limited program for the operational deployment of one Snark squadron to acquire some missile capability until Intercontinental ballistic missiles became available in quantity. On January 1, 1959, SAC activated the 702nd Strategic Missile Wing (ICM-Snark) at Presque Isle and assigned it to the Eighth Air Force, thus making it the first SAC missile wing to be assigned to a numbered air force.

The 556th Strategic Missile Squadron (SMS) at Patrick AFB, Florida was assigned to the 702d SMW on April 1, 1959 and was scheduled to move to Presque Isle in July, but SAC inactivated the squadron on 15 July 1959 before the move could be consummated. As a result of this action and the subsequent cancellation of the programmed activation of the 702nd Missile Maintenance Squadron, the 702nd SMW was put in the unique position of having no assigned subordinate units. All operational and maintenance functions associated with the Snark ICM were handled by the 702nd SMW's deputy commander for missiles.

The 702d SMW placed the first Snark ICM on alert on March 18, 1960 and by the end of fiscal year 1960, a total of four Snark missiles were on strategic alert. Yet, it was not until February 28, 1961 that SAC was able to declare the 702d SMW operational. But the Snark was living on borrowed time.

Shortly after taking office in 1961, President John F. Kennedy scrapped the project. The Strategic Air Command's negative evaluation of the Snark's potential was reinforced on March 28, 1961 when President Kennedy, in a special defense budget message, directed the phase out of the missile because it was "obsolete and of marginal military value" relative to ballistic missiles. The President cited the weapon's low reliability (a particularly sore point to his Secretary of Defense), inability to penetrate, lack of positive control, and vulnerable, unprotected launch sites. Accordingly, on June 25, 1961 SAC inactivated the 702d Strategic Missile Wing at Presque Isle less than four months after it had been declared operational.

With the missile wing inactivated all military activity ceased. The Presque Isle Industrial Council was formed to develop an industrial park. The former air base now consists of an airport, technical college, housing area and 440 acres (1.8 km2) of industrial park.

John Wayne's, Island in the Sky