From Infogalactic: the planetary knowledge core
Jump to: navigation, search
For other uses, see Pressed Steel.

The Pressed Steel Car strike of 1909, also known as the "1909 McKees Rocks strike," was an American labor strike which lasted from July 13 through September 8. The walkout drew national attention when it climaxed on Sunday August 22 in a bloody battle between strikers, private security agents, and the Pennsylvania State Police. At least 12 people died, and perhaps as many as 26.[2] The strike was the major industrial labor dispute in the Pittsburgh district after the famous 1892 Homestead strike and was a precursor to the Great Steel Strike of 1919.

History of the strike

Frank Norton Hoffstot's Pressed Steel Car Company, sited downstream from Pittsburgh on the south bank of the Ohio River in McKees Rocks, Pennsylvania, manufactured passenger and freight railroad cars on an assembly-line basis. It was America's second-largest rail car producer.[3] Pressed Steel employed a workforce of 6,000, most foreign born, comprising 16 distinct ethnicities. The firm was infamous for its style of industrial peonage with immigrant workers.[4]

Working conditions in the plant were primitive even by Pittsburgh standards.[5] Pressed Steel Car Company was locally called "The Last Chance" and "The Slaughterhouse". "Men are persecuted, robbed, and slaughtered, and their wives are abused in a manner worse than death—all to obtain or retain positions that barely keep starvation from the door," said Rev. A.F. Toner, a priest at St. Mary Roman Catholic Church in McKees Rocks, in an interview with The Pittsburgh Leader. The local coroner, Joseph G. Armstrong, estimated that deaths in the plant averaged about one a day and were often caused by moving cranes. One of the charges made by Slavic immigrant workers was that wives and daughters were subject to sexual harassment to repay food and rental debts to the company agents.[6]

Anti-Hoffstot cartoon about the 1909 strike

Particularly galling to the workers was the use of the Baldwin contract, commonly known as "pooling." Under this system, jobs were parceled out in lots by a foreman who contracted that it be done for a given sum, with the money paid to be divided pro rata by the men under him.[7] The system was rife with corruption, with workers often paying substantial kickbacks to the foreman to retain their jobs.[8] The system resulted in unpredictable and often insufficient rates of pay, as one sympathetic journalist reported:

"President [Frank N.] Hoffstot says that it has proven to be a very satisfactory arrangement. And it has — for the company. As evidence of this we saw several pay envelopes showing that many of the workers slave for practically nothing. One envelope showed that the owner worked nine days, ten hours a day, and got $2.75; another eleven days and received $3.75; another three days and got $1.75; another four days and got $1, and the fifth, who had been idle for two months, worked three days and received nothing.... The company manages the pooling system through the foreman — and the workers are skinned until their bones shine. * * *

Adding further to the destabilizing misery was the company-owned housing, ramshackle dwellings housing six families and renting for $12 a month.[8] Moreover, the company owned the stores from which the workers had to buy their provisions at inflated prices, lest they lose their jobs.[8] The system of economic domination was particularly severe and there came a day when the breaking point was reached. 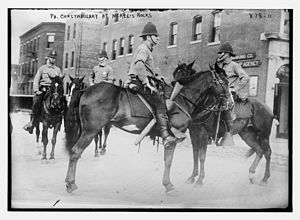 Mounted members of the Pennsylvania constabulary were deployed during the McKees Rocks strike. These officers were called "Cossacks" by the strikers.

The strike was triggered on Saturday July 10, a payday on which many workers were shorter in their pay than usual. The men demanded an explanation; management refused to speak with the workers' representatives. James Rider, manager of The Pressed Steel Car Company, responded by hiring Pearl Bergoff, the notorious owner of strike-breaking paramilitary force.[10] By July 14 Berghoff deployed 500 scabs to the plant, most entering quietly by rail, although a boat called Steel Queen carrying 300 was rebuffed, at least initially, by strikers' gunfire on the shore.

The next day 200 state constables and 300 deputy sheriffs insured the safety of the strikebreakers and also began evicting strikers from company houses. The New York Times reported, "The illiterate foreigners were like so many savages today when they first caught sight of the khaki-clad constabulary who had come in during the night."[11]

An adjacent company-owned community, Presston (called Schoenville at the time and popularly referred to as "Hunky Town"), was at the heart of the strike. Presston workers were kept in constant debt to the company store and those behind in rent were evicted. On Saturday August 21 Deputy Sheriff Harry Exley assisted in one eviction by placing a baby buggy on top of a wagon laden with a Presston family's possessions. A photographer captured the moment. When it was printed in a Pittsburgh newspaper, the photo whipped up public sympathy for the strikers. In retaliation for his heartless act, strikers hunted down Deputy Exley, pulling him from a streetcar and killing him. The next evening strikers clashed with Pennsylvania State Police mounted on horseback ("Black Cossacks", the Slavs dubbed them) on "Bloody Sunday".[12] 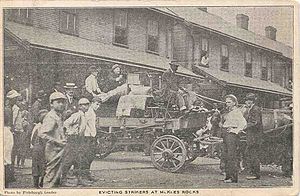 The strikers were joined by members of the Industrial Workers of the World (IWW), especially William Trautmann, one of its founders. Trautmann later published a novel, Riot, about the McKees Rocks strike. After Trautmann's arrest for strike organizing activities, Joe Ettor replaced him, and IWW leader Big Bill Haywood also arrived to rally strikers.[13]

In all, some 5,000 workers of the Pressed Steel Car Company's plant at McKees Rock went out on strike. These were joined by 3,000 others who worked for the Standard Steel Car Company of Butler and others in New Castle.[14]

Settlement of the strike

The strike was settled on September 8 when Pressed Steel Car agreed to a wage increase, the posting of wage rates, and ending abuses in company housing practices.