Primanti Brothers (Pittsburgh English: [pɚˈmæːni], Standard English: [pɹɪˈmænti] or [pɹɪˈmɑnti]) is a chain of sandwich shops in the eastern United States. Founded in 1933, the chain is known for its signature sandwiches of grilled meat, an Italian dressing-based coleslaw, tomato slices, and French fries between two pieces of Italian bread.[1]

During the 2007 James Beard Foundation Awards, Primanti's was named as one of "America's Classic" restaurants.[2]

The original shop is located in Pittsburgh's Strip District, a busy area along the Allegheny River filled with warehouses and produce yards. According to the restaurant, Joe Primanti, born in suburban Wilmerding, Pennsylvania, invented the sandwich during the Great Depression. His brothers, Dick and Stanley, later joined him. The Primantis opened their diner at Smallman Street and 18th Street in the Strip District and served the late-night and early-morning workers who were unloading fish, fruits, and vegetables.[3]

It has also been a tradition for the late night crowd to go to Primanti's in the Strip District after the bars have closed, due to their hours of operation (at one time they were one of the few establishments open after 2 A.M.).

With the passing of Stanley Primanti in the early 70's and John in 1974, Dick decided to sell the business to Jim Patrinos in 1975. Today there are 16 Pittsburgh locations, including at the city's major sports venues PNC Park, Heinz Field, and the Consol Energy Center, as well as several other locations throughout the eastern United States.[4] 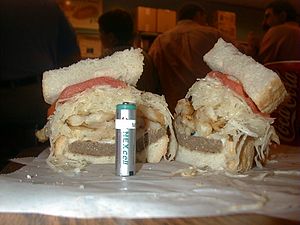 The Primanti Bros version of a cheese steak sandwich

The restaurant and its signature sandwich have been featured in several national publications and television shows, including National Geographic magazine,[5] Man v. Food,[6] and Adam Richman's Best Sandwich in America. Primanti Brothers made the Pittsburgh Post-Gazette's list of "1,000 Places to See Before You Die in the USA and Canada",[7] and their sandwich is a featured Pittsburgh landmark on Yinztagram.[8]

The restaurant was mentioned on the April 21, 2008, episode of The Daily Show with Jon Stewart in an interview with president Barack Obama. Stewart suggested that Obama visit the restaurant for their "great sandwiches", which Stewart had enjoyed as a comedian on the club circuit.[9]

An ESPN.com rating of PNC Park mentioned that "the best [concession] item is the famous Primanti Brothers sandwich, a Pittsburgh institution", and granted this "signature concession item" an exuberant score of "5+++" (out of 5). This helped PNC Park to achieve its overall #1 ranking in the feature.[10]

On March 9, 2011, U.S. District Judge David S. Cercone approved a settlement between Primanti Brothers and a customer in response a lawsuit over the content of credit card receipts. In the suit, the plaintiff, Nora Hoxha, claimed that the restaurant's credit card receipts printed all, or if not all, too many digits of a customer's credit card number in violation of the Fair and Accurate Credit Transactions Act. As part of the settlement, the restaurant agreed to provide affected customers with a free menu item and a side item or non-alcoholic drink. The restaurant also agreed to make a donation of $25,000 to the Carnegie Museums and pay up to $62,000 for the plaintiff's attorneys' costs.[11]

Primanti Brothers locations are found throughout Pittsburgh, Pennsylvania and its suburbs, with an additional three in the Fort Lauderdale, Florida area, two near Youngstown, Ohio, one in both Morgantown and Wheeling, West Virginia, as well as Clarksburg, West Virginia, one in Erie, State College, Grove City, Altoona, Washington, Pennsylvania, and York, Pennsylvania, and one near Hagerstown, Maryland. There are also restaurants in PNC Park, Consol Energy Center, and Heinz Field.