From Infogalactic: the planetary knowledge core
Jump to: navigation, search
This article is about Questions in Parliament to the Prime Minister of the United Kingdom. For regular ministerial questioning, see question time.

Prime Minister's Questions (often abbreviated to PMQs and officially known as Questions to the Prime Minister) is a constitutional convention in the United Kingdom, currently held as a single session every Wednesday at noon when the House of Commons is sitting, during which the Prime Minister spends around half an hour answering questions from Members of Parliament (MPs).[1]

PMQs forms an important part of British political culture. Due to the natural drama of the sessions, it is among the best-known parliamentary business in the country, with tickets to the Strangers' Gallery (the public gallery) for Wednesdays being the most sought-after parliamentary tickets.

A Procedure Committee report in 1959 recommended that questions to the prime minister be taken in two fixed-period, 15-minute slots on Tuesday and Thursday afternoons. The recommendations were put into practice under Harold Macmillan during a successful experiment from 18 July 1961 to the end of the session (4 August).[3] PMQs were made permanent in the following parliamentary session, with the first of these on 24 October 1961.[2][4][5]

The style and culture of PMQs has changed gradually over time. According to Speaker Selwyn Lloyd, the now famous disorderly behaviour of MPs during PMQs first arose as a result of the personal animosity between Harold Wilson and Edward Heath; before this PMQs had been lively but comparatively civilised.[2][6] In the past, prime ministers often opted to transfer questions to the relevant minister, and Leaders of the Opposition did not always take their allocated number of questions in some sessions, sometimes opting not to ask any questions at all. This changed during the premiership of Margaret Thatcher, when the prime minister chose not to transfer any questions to other members of her Cabinet, and Labour leader Neil Kinnock would always take his full allocation of questions.[2]

One of Tony Blair's first acts as prime minister was to replace the two 15-minute sessions with a single 30-minute session at noon on Wednesdays.[2] The allocated number of questions in each session for the Leader of the Opposition was doubled from three to six, and the leader of the third-largest party in the Commons was given two questions. The first PMQs to use this new format took place on 21 May 1997.[7]

During the Conservative-Liberal Democrat coalition government from 2010–2015, the leader of the Liberal Democrats, as a member of the government, did not ask questions during PMQs.[8] Instead the leader of the second largest parliamentary opposition party at the time, Nigel Dodds of the Democratic Unionist Party (DUP), usually asked a single question later in the session followed by at least one MP from another smaller party such as the Scottish National Party or Plaid Cymru. 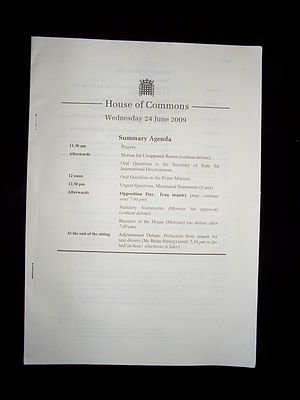 Backbench MPs wishing to ask a question must enter their names on the Order Paper. The names of entrants are then shuffled in a ballot to produce a random order in which they will be called by the Speaker. The Speaker will then call on MPs to put their questions, usually in an alternating fashion: one MP from the government benches is followed by one from the opposition benches. MPs who are not selected may be chosen to ask a supplementary question if they "catch the eye" of the Speaker, which is done by standing and sitting immediately before the prime minister gives an answer.

The first formal question on the Order Paper, posed by simply saying "Number one, Mr. Speaker", is usually to ask the Prime Minister "if he will list his engagements for the day". The Prime Minister usually replies:

Before listing his engagements, the Prime Minister sometimes extends condolences or offers congratulations after significant events. During the Iraq War, Tony Blair introduced the practice of naming any British military personnel who had been killed in service since the last time he addressed the House. The practice has been continued by Blair's successors as prime minister. After this, the MP may ask a supplementary question about any subject which might occupy the Prime Minister's time. Most MPs table the same engagements question and so after it has been asked for the first time, any other MPs who have tabled the same question are simply called to ask an untabled question, meaning that the Prime Minister will not know what questions will be asked of him.[14]

Occasionally the first question tabled is on a specific area of policy, not the engagements question. This, though, is quite rare as it would allow the Prime Minister to prepare a response in advance; the non-descript question allows some chance of catching him or her out with an unexpected supplementary question.[14]

At times of national or personal tragedy or crisis, PMQs have been temporarily suspended. The last such suspension occurred on 25 February 2009 when the Speaker, at the request of Prime Minister Gordon Brown, suspended the Commons until 12:30 p.m. as a mark of respect following the unexpected death of Opposition leader David Cameron's son. Prime Minister's Questions was also suspended after the sudden death of the leader of the Labour Party, John Smith, in 1994.[15] PMQs have been filmed since 1989, and have been broadcast live since 1990.[16] They are broadcast live in the United Kingdom on the BBC Two and BBC Parliament TV channels. It is also broadcast outside the United Kingdom, most notably on the U.S. cable channel C-SPAN (the segment is broadcast live on C-SPAN2 on Wednesday at 7 a.m. ET, and re-run on C-SPAN on Sunday at 9 p.m. ET)[17] and has been spoofed on the American late-night television sketch comedy Saturday Night Live.[18]

On 17 April 2014, John Bercow told the BBC that the "histrionics and cacophony of noise" in PMQs were so bad that a number of seasoned female MPs had told him they would stop attending. Bercow described it as being a "real problem" and that "A number of seasoned parliamentarians, who are not shrinking violets, not delicate creatures at all, are saying, 'This is so bad that I am not going to take part, I am not going to come along, I feel embarrassed by it."[21] Since becoming Leader of the Opposition, Jeremy Corbyn has attempted to reform PMQs by using questions submitted by members of the public and attempting to reduce the "theatrical" element – a change which David Cameron co-operated with initially. However, more recent times have seen him using jokes, rhetoric and naming works by William Shakespeare by way of avoiding actually replying to the question set before him.[22][23]

Leaders at the dispatch box since 1961

The most high-profile contributors at Prime Minister's questions are the Prime Minister and the Leader of the Opposition, who speak opposite each other at the dispatch box. Regular, fixed sessions have taken place since 1961, and the list below outlines the prime ministers since 1961 and Opposition party leaders they faced across the floor of the House of Commons:

Deputies at the dispatch box

In the present parliament, George Osborne (as First Secretary of State) deputises for Cameron and Angela Eagle (as Shadow First Secretary) for Corbyn.[24]