Malcolm Turnbull has held the office of Prime Minister since 15 September 2015. He received his commission after replacing Tony Abbott as the leader of the Liberal Party, the dominant party in the Coalition government.[2]

Former Prime Ministers continue to be important national figures, and in some cases go on to significant post-prime ministerial careers. Some notable examples have included: Edmund Barton, who was a justice of the High Court; George Reid, Andrew Fisher, Joseph Cook and Stanley Bruce, who were High Commissioners to the United Kingdom; Arthur Fadden, who was Treasurer under another prime minister, Robert Menzies; and Kevin Rudd, who became Julia Gillard's Foreign Minister.

The Prime Minister of Australia is appointed by the Governor-General of Australia under Section 64 of the Australian Constitution, which empowers the Governor-General to appoint Ministers of the Crown and requires such Ministers to be members of the House of Representatives or the Senate, or become members within three months of the appointment. Before being sworn in as a minister, a person must first be sworn in as a member of the Federal Executive Council if they are not already a member. Membership of the Federal Executive Council entitles the member to the style of The Honourable (usually abbreviated to The Hon) for life, barring exceptional circumstances. The senior members of the Executive Council constitute the Cabinet of Australia.

Despite the importance of the office of prime minister, the Constitution does not mention the office by name. The conventions of the Westminster system were thought to be sufficiently entrenched in Australia by the authors of the Constitution that it was deemed unnecessary to detail them. The formal title of the portfolio has always been simply "Prime Minister", except for the period of the Fourth Deakin Ministry (June 1909 to April 1910), when it was known as "Prime Minister (without portfolio)".[3]

Following a resignation in other circumstances, or the death of a prime minister, the governor-general will generally appoint as prime minister the person elected as leader by the governing party or, in the case of a coalition, the senior party in the coalition. There have been four notable exceptions to this:

There were only three other cases where someone other than the leader of the majority party in the House of Representatives was prime minister: 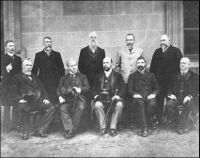 The first Prime Minister of Australia, Edmund Barton (sitting second from left), with his Cabinet, 1901.

The power of the prime minister is subject to a number of limitations. Prime ministers removed as leader of his or her party, or whose government loses a vote of no-confidence in the House of Representatives, must advise an election of the lower house or resign the office or be dismissed by the governor-general.[citation needed]

The prime minister's party will normally have a majority in the House of Representatives and party discipline is exceptionally strong in Australian politics, so passage of the government's legislation through the House of Representatives is mostly a formality. Attaining the support of the Senate can be more difficult as government usually lacks an absolute majority because the Senate's representation is based on overall proportion of votes and often includes minor parties.

Prime Ministers Curtin, Fadden, Hughes, Menzies and Governor-General The Duke of Gloucester 2nd from left, in 1945.

The Royal Australian Air Force's No. 34 Squadron transports the prime minister within Australia and overseas by specially converted Boeing Business, Jets and smaller Challenger aircraft. The aircraft contain secure communications equipment as well as office, conference room and sleeping compartments. The call-sign for the aircraft is "Envoy".

The prime minister's official residence is The Lodge in Canberra, Australian Capital Territory, but not all prime ministers have chosen to make use of it. Jim Scullin preferred to live at the Hotel Canberra (now the Hyatt Hotel); Ben Chifley lived in the Hotel Kurrajong; and John Howard made Kirribilli House in Sydney his primary residence, using The Lodge when in Canberra on official business. On her appointment on 24 June 2010, Julia Gillard said she would not be living in The Lodge until such time as she was returned to office by popular vote at the next general election. (She became prime minister mid-term after replacing the incumbent, Kevin Rudd, who resigned in the face of an unwinnable party-room ballot.) The official residences are fully staffed and catered for both the prime minister and his or her family. A considerable amount of official entertaining is conducted at these residences.

Prime ministers are usually granted certain privileges after leaving office, such as office accommodation, staff assistance, and a Life Gold Pass, which entitles the holder to travel within Australia for "non-commercial" purposes at government expense. 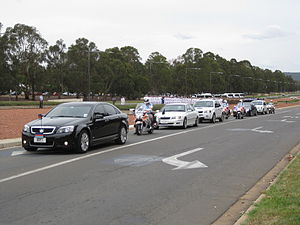 Since 2015, the Prime Minister of Australia's official car has been a fleet of heavily armoured BMW 7 Series, which replaced a fleet of Holden Caprices. It is escorted by police vehicles from state and federal authorities. The Prime Minister's car bears the number plate "C1" (meaning "Commonwealth 1").[10] 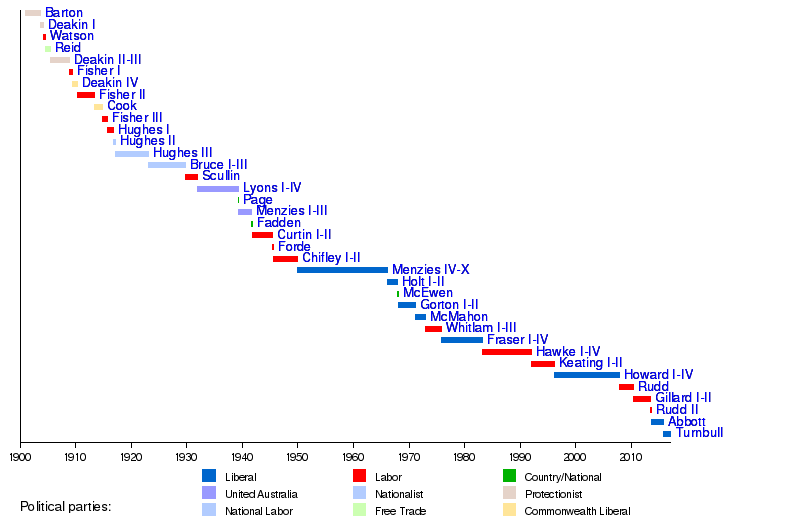 The greatest number of living former prime ministers at any one time was eight. This has occurred twice:

John Curtin is the only prime minister to serve time in gaol (three days for failing to comply with an order for a compulsory medical examination for conscription, during World War I).[13]

The three youngest people when they first became prime minister were:

The three oldest people when they first became prime minister were:

The three youngest people to last leave the office of prime minister were:

The three oldest people to last leave the office of prime minister were:

The longest serving prime minister was Sir Robert Menzies, who served in office twice: from 26 April 1939 to 28 August 1941, and again from 19 December 1949 to 26 January 1966. In total Robert Menzies spent 18 years, 5 months and 12 days in office. He served under the United Australia Party and the Liberal Party respectively.

The shortest-serving prime minister was Frank Forde, who was appointed to the position on 6 July 1945 after the death of John Curtin, and served until 13 July 1945 when Ben Chifley was elected leader of the Australian Labor Party.

Ben Chifley died only one year and six months after leaving the prime ministership. Alfred Deakin lived another nine years and five months.[15]

All the others who have left office at least 10 years ago have lived at least another 10 years. Nine of them (Bruce, Cook, Fadden, Forde, Fraser, Gorton, Hughes, Watson, and Whitlam) lived more than 25 years after leaving the office, and all but one of them have survived longer than 30 years (Hughes lasted 29 years and 8 months).

The longest-surviving was Gough Whitlam, who lived 38 years and 11 months after office, surpassing Stanley Bruce's previous record of 37 years and 10 months after leaving the office.[16]