The Prime Minister of Belgium (Dutch: Eerste minister van België; French: Premier ministre de la Belgique; German: Premierminister von Belgien) or Premier of Belgium is the head of the federal government in the Kingdom of Belgium.

Although Leaders of Government (French: Chefs de Cabinet) had been appointed since the independence of the country, until 1918 the King often presided over the Council of Ministers, so the modern era of the "Premiership" started after World War I with Léon Delacroix. The political importance of the King of the Belgians has decreased over time, whereas the position of Prime Minister has gradually become more important.

Since the independence of Belgium in 1830, governments have been designated with the name of the minister who formed the government as formateur, but that position did not have a specific status. Originally, from 1831 the King of the Belgians presided over the Council of Ministers, but when he was absent, the presidency was taken by the chef de cabinet (Head of Cabinet), usually the oldest or most influential minister. This position gradually became more prominent, and the minister with this title then soon acquired the competency to present the King with the proposed allocation of the various ministerial departments among the ministers.

The title of Prime Minister or Premier was used for the first time in 1918 in official documents and it is at this time that the position was assigned to its own cabinet. Only in 1970 the title was incorporated in the Belgian Constitution with the first state reform. Gradually, the Head of Cabinet replaced the King more often during the first half of the twentieth century, and as such gained importance within government. Nevertheless, given his newly acquired prominence, as a member of the cabinet the Head of Cabinet continued to lead a ministerial department.

With the expansion of voting rights after World War I, more political parties started to win seats in parliament—especially the Belgian Socialist Party—and this made it impossible to achieve an absolute majority in parliament. Since then, coalition governments have been necessary, which has made the task of forming a government by the appointed formateur more difficult. Consequently, the formateur increasingly gained greater respect, and much prestige. Thus the formateur became prominent as a position of leadership. As the ministers of the government now represented various political parties, there was a need for someone to coordinate the proceedings of the various ministers. The Prime Minister was now asserted as the actual head of government, and this is how the office of Prime Minister came into existence.

The day after the federal elections, the incumbent Prime Minister offers the resignation of his government to the King. The King then asks the resigning government to continue as a caretaker government until a new government is formed. The King then consults a number of prominent politicians in order to ascertain the different possibilities of forming a government. He usually consults the presidents of the Chamber of Representatives and the Senate, the most important political parties, and other people of political and socio-economic importance. After the consultations, the King appoints an informateur who is in charge of collecting information from the different political parties about their demands for formation of a new government. After these consultations, the informateur reports to the King so that the King can find a suitable formateur, who is responsible for forming the government. Usually, it is the formateur of the federal government who then becomes Prime Minister.[1]

The official residence and office of the Prime Minister of the Belgian federal government is located at Wetstraat 16 (Dutch)/ 16, rue de la Loi (French) (Law Street in English) among many notable Belgian government and European Union buildings in the centre of Brussels. The residence includes the Belgian Federal Cabinet, the Chancellery and the Council of Ministers. It functions as the nerve center of Belgian politics.

The building was originally erected as the so-called "Refuge House" by the Saint Gertrude Abbey of Leuven. It was designed by the Belgian-Austrian architect Louis Joseph Montoyer.[2] At the time of the United Kingdom of the Netherlands (1815–1830), the building was planned to be used as the location for the Ministry of Foreign Affairs.[3] In 1830 it was purchased by Prince Eugène of Ligne,[4] and from 1944, the building became state property after which it was furnished to function as a meeting place for the prime minister and his cabinet. 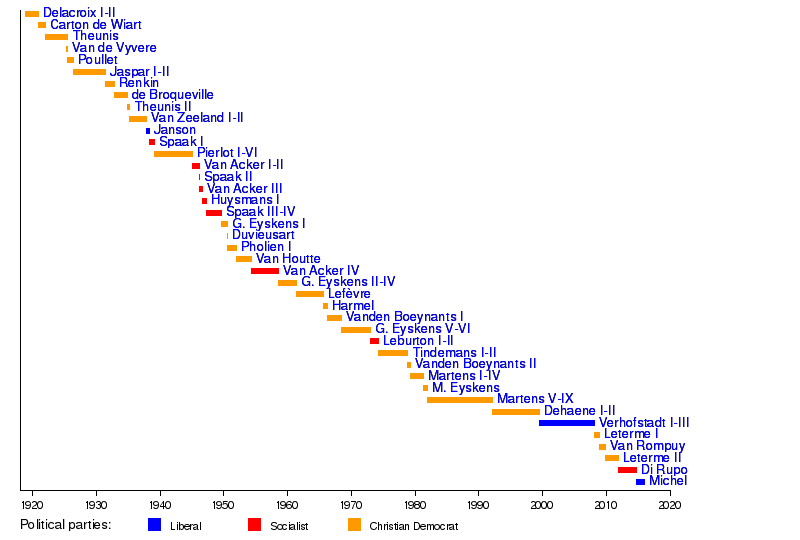