The Prime Minister of Cambodia (Khmer: នាយករដ្ឋមន្ត្រីនៃព្រះរាជាណាចក្រកម្ពុជា) is the head of government of Cambodia. The prime minister is also the chairman of the Cabinet and leads the executive branch of the Royal Cambodian Government. The prime minister is required to be a member of parliament and is appointed by the monarch. He is elected for a term of five years; no term limits are imposed on the office. Since 1945, there have been 36 prime ministers.[2]

The incumbent prime minister, since 1998, is Hun Sen of the Cambodian People's Party. He previously served from 1985 to 1993 and was second prime minister from 1993 to 1998. He was elected as prime minister in his own right in 1998. This also makes him the longest-serving prime minister.

The position was first held by King Norodom Sihanouk in March 1945, during the French colonial era.[3] Cambodia's first parliamentary elections were held on 1 September 1946. The Democratic Party remained the dominant-party in Cambodian politics throughout the 1940s until the formation of the Sangkum Reastr Niyum in 1955. Sangkum was the dominant-party in Cambodia from 1955 to 1970 following a military coup by General Lon Nol. Until 1993, it was not an elected position. Merely few prime ministers were elected including Sisowath Youtevong, Norodom Sihanouk, and Lon Nol. In 1993, constitutional monarchy was restored in Cambodia. The role of the prime minister was officially recognized in the constitution. Norodom Ranariddh became the first democratically elected prime minister. 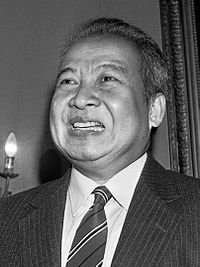 The powers of the Prime Minister are established by the current Constitution of Cambodia, adopted on 24 September 1993 and amended on 4 March 1999.[6] They are defined by the following articles of the Constitution:

The Deputy Prime Minister (Khmer: ឧបនាយករដ្ឋមន្ត្រី) serves as the deputy to the Prime Minister of Cambodia and is the second highest position in the Cabinet. As of 2014, there are eleven deputy prime ministers.[7] 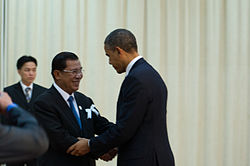