From Infogalactic: the planetary knowledge core
(Redirected from Prime Minister of Estonia in exile)
Jump to: navigation, search

The Estonian government-in-exile [1] refers to the formally declared governmental authority of the Republic of Estonia in exile, existing from 1953 until the reestablishment of Estonian sovereignty over Estonian territory in 1992. It traced its legitimacy through constitutional succession to the last Estonian government in power prior to the Soviet invasion of 1940.

The USSR illegally annexed Estonia in June, 1940. Soviet authorities arrested President Konstantin Päts and deported him to the USSR where he died in prison in 1956. Many members of the current and past governments were deported or executed, including eight former heads of state and 38 ministers. Those who survived went underground.

Jüri Uluots was the last constitutional prime minister at the time of Soviet occupation. With the loss of Päts, Uluots, as the head of the Estonian government in accordance with Section 46 the Estonian Constitution (Riigi Teataja 03.09.1937 No. 71 Art 590), which specified that in the case that the President vacated the office or was otherwise unable to execute his duties, those duties were to be assumed by the Prime Minister, who carries duties of the Prime Minister to the Acting Prime Minister, became acting head of State.

Uluots attempted to appoint a new Estonian government in July 1941, at the beginning of the German occupation, but German authorities refused to recognize Estonia as a sovereign state.

Main article: National Committee of the Republic of Estonia 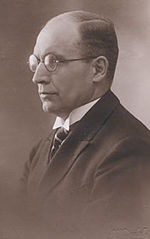 In June 1942 political leaders of Estonia who had survived Soviet repressions held a meeting hidden from the occupying powers in Estonia where the formation of an underground Estonian government and the options for preserving continuity of the republic were discussed.[2] On January 6, 1943, a meeting was held at the Estonian foreign delegation in Stockholm. In order to preserve the legal continuation of the Republic of Estonia, it was decided that the last constitutional prime minister, Jüri Uluots, had to continue to fulfill his responsibilities as prime minister.[2] On April 20, 1944, the Electoral Committee of the Republic of Estonia (Vabariigi Presidendi Asetäitja Valimiskogu, the institution specified in the Constitution for electing the Acting President of the Republic) held a clandestine meeting in Tallinn. The participants included:

The Committee determined that the Soviet-era appointment of Johannes Vares as Prime Minister by Konstantin Päts had been illegal and that Uluots had assumed the President's duties from June 21, 1940, onwards.[3] On June 21, 1944 – Jüri Uluots appointed Otto Tief as deputy prime minister.[2] On September 18, 1944 Uluots, suffering from cancer, named Otto Tief the Acting Prime Minister and appointed a Government which consisted of 11 members. On September 20, 1944, Uluots, in failing health, departed for Sweden. Tief assumed office in accordance with the constitution and took the opportunity with the departure of the Germans to declare the legitimate Estonian government restored. Most of members of this government left from Tallinn on September 21 and Tief on September 22. As reported by the Royal Institute of International Affairs: on September 21 the Estonian national government was proclaimed, Estonian forces seized the government buildings in Toompea and ordered the German forces to leave.[4] The flag of Germany was replaced with the Estonian tricolour in the Pikk Hermann flag tower. Tief’s government, however, failed to keep control, as Estonian military units led by Johan Pitka clashed with both Germans and Soviets. On September 22 the Soviets took control of Tallinn and took the Estonian flag down.

Flight ahead of Soviet forces

The Tief government fled Tallinn. The last meeting was held in Põgari village on September 22. However, the boat which was to rendezvous to evacuate them across the Baltic developed engine trouble and failed to arrive in time. Most of the members and officials, including Tief, were caught, jailed, deported, or executed by the advancing Soviets. Tief managed to survive a decade in Siberia and died back in Estonia in 1976. Only Kaarel Liidak, Minister of Agriculture, died in hiding on January 16, 1945.

After Uluots died on January 9, 1945, August Rei, as the most senior surviving member of the government, assumed the role of acting head of state. Rei was supported by the surviving members of the Tief government in Sweden. Rei was the last Estonian envoy in Moscow before the Soviet annexation and had managed to escape from Moscow through Riga to Stockholm in June 1940.[5]

Rei declared an official Estonian government in exile on January 12, 1953, in Oslo, Norway. (Oslo, not Stockholm, was chosen because Norway did not have bans on such political activity, while Sweden had.) However, another group of Estonian politicians believed a president should be elected through some representative body. This group was led by Alfred Maurer, who had been second deputy chairman of the National Council of Estonia prior to 1940. Maurer was elected Acting President of the Republic (Vabariigi Presidendi Asetäitja) in exile on March 3, 1953, in Augustdorf, Germany. While Maurer's lineage had more support among the exile community, he never appointed any new government (stating that Tief's government is still in office and there is no need for a new government) and this line became extinct upon Maurer’s death a year-and-a-half later, on September 20, 1954. This left the Rei government as the sole contestant to legitimacy.

The position of acting head of government continued to be assumed by succession following Rei’s death in 1963. From 1953 to 1992, five governments in exile were formed.

Of the three Baltic states, only Estonia established a formal government in exile. In the cases of Latvia and Lithuania, sovereign authority had been vested in its diplomatic legations. Even with regard to Estonia, the legations were the primary instrument for the conduct of diplomacy and for administering the daily matters of state (such as issuing passports). Estonia’s primary legation was the consulate in New York.

Under the Stimson Doctrine, USA, and under similar doctrines, the legitimacy of the Soviet occupation of Baltic states was never recognized. As primary diplomatic authority was exercised by the Estonian consulate (in New York), the government in exile’s role from Oslo was, to a great degree, symbolic in nature. The Estonian consulate in Ireland was in legal proceedings. Estonian ships were instructed to go to a Soviet report. Three Estonian ships Otto, Piret and Mall, and two from Latvia: Rāmava and Everoja choose a neutral port in Ireland instead. Ivan Maisky, the Soviet Union's ambassador to the United Kingdom, applied to the High Court in Dublin for possession of the ships. Their owners could not be contacted. John McEvoy honorary consul of Estonia successfully opposed the action.[6] This was recalled by Toomas Hendrik Ilves, President of Estonia.[7]