The Prime Minister of Ukraine (Ukrainian: Прем'єр-міністр України, Prem'ier-ministr Ukrayiny) is Ukraine's head of government presiding over the Cabinet of Ministers of Ukraine, which is the highest body of the executive branch of the Ukrainian government. The position replaced the Soviet post of the Chairman of Council of Ministers of the Ukrainian SSR, which was established on March 25, 1946.

Since Ukrainian independence from the Soviet Union in 1991, there have been fifteen Prime Ministers,[2] or nineteen, counting acting PMs. Yatsenyuk is the first Prime Minister who has come from Western Ukraine. Two Prime Ministers were born in the Russian SFSR.

The prime minister is appointed by the president with the consent of the Verkhovna Rada. The consent is deemed granted by the parliament when a simple majority of its constitutional membership votes in favour of the candidate nominated by the president. The highest parliamentary approval to date was received by Yulia Tymoshenko who was appointed the Prime Minister on February 4, 2005 with 373 votes in the Verkhovna Rada. Other prime ministers who received more than 300 votes were Arseniy Yatsenyuk (371), Yatsenyuk again in 2014 (341)[8] Vitold Fokin (332), and Leonid Kuchma (316).

The procedure of granting consent by the parliament is usually preceded by several days of comprehensive consultations and interviews of the candidate by the parliamentary factions. The approval by the legislature is not a mere formality. Some candidates were ratified by a narrow margin and a candidate may be turned down. For instance, in 1999, Valeriy Pustovoitenko fell three votes short of being re-confirmed after he tendered his resignation at the second inauguration of President Leonid Kuchma in 1999. Kuchma chose Viktor Yushchenko as his alternative candidate. Another example is the approval of Yuriy Yekhanurov's candidacy (he fell three votes short of approval, but was confirmed on the second attempt two days later).

After the constitutional reform of late 2004, the president was restricted in his choice of prime minister and was virtually obliged to nominate the person proposed by the parliamentary coalition. The prime minister, as with all members of executive branch, cannot be a member of parliament. 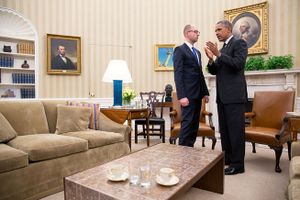 President Barack Obama talks with Prime Minister Arseniy Yatsenyuk at the conclusion of their bilateral meeting in the Oval Office, March 12, 2014.

The prime minister heads Ukraine's executive branch of government, the Cabinet of Ministers and signs decrees passed by the Cabinet.

The prime minister has the authority to propose candidates for ministry offices to the Verkhovna Rada,[9] with the exception of the Minister of Foreign Affairs and the Minister of Defense, which are proposed by the president. The prime minister can also propose candidates for the heads of regional administrations to the president for consideration.[9]

Prime ministers are frequently asked by individual citizens for help in solving their personal problems, sometimes successfully. In 2012, Prime Minister Azarov received dozens of personal pleas every day on his Facebook page.[12] By-passing local Governments is an ages old practice in Ukraine.[12] 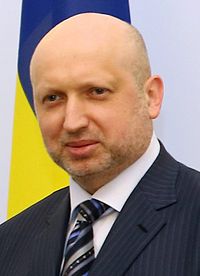 The first vice-prime minister, also known as the First Deputy, heads the cabinet in the absence of the prime minister due to resignation or dismissal. Among the most notable First deputies were Yukhym Zvyahilsky and Mykola Azarov, who served as the acting prime minister longer for anyone. Beside them the position of the "acting" also served Valentyn Symonenko, Vasyl Durdynets, Oleksandr Turchynov and others.

Apart from the first vice-prime minister, there are also several other vice-ministers who support the Prime Minister, and may be in charge of one or more ministries. In 1991–1992 there the office of the State Minister-Minister was also introduced. Traditionally Vice-Prime Ministers are in charge of an area of general state government policy such as the Agro-Industrial Complex, Humanitarian Affairs, Economical Affairs, or Regional Policy. On certain occasions those deputies may be given regular ministerial portfolios as well, as happened in the 2010 Azarov Government.

Before the constitutional reform of 2004, the prime minister was usually dismissed unilaterally by the president. After the reform, the prime minister could only be dismissed by the parliament. Formally, the Verkhovna Rada needed to pass a resolution of no confidence of the cabinet, which had to result in the prime minister's resignation. However, the parliament could not put such a resolution to the vote within one year of the approval of the cabinet's official programme. The Cabinets of Prime Ministers Viktor Yushchenko and Viktor Yanukovych were dismissed in this way, with the latter refusing to tender his resignation to the president claiming a violation of the one-year period condition. The Cabinet of Yuriy Yekhanurov had also been formally dismissed, but the parliamentary act was subsequently repealed.

Since Ukrainian independence from the Soviet Union in 1991, there have been 15 prime ministers[2] (19 including acting PMs). Yulia Tymoshenko was the first (and only) female Prime Minister of Ukraine.[14] Before the re-appointment as Prime Minister of Mykola Azarov, Tymoshenko was the longest serving prime minister serving for two terms and a total of 1,029 days (days serving as acting Prime Minister are not included in these numbers).[15] Since Azarov was re-appointed as prime minister on 13 December 2012, he has since broken Tymoshenko's record.[16][17] Azarov resigned on 28 January 2014, due to public outcry and protests following the Euromaidan.[18] He was succeeded up by Arseniy Yatsenyuk on 27 February 2014.[19] Yatsenyuk announced he would resign as Prime Minister on 24 July 2014;[19] but his resignation was declined by parliament on 31 July 2014 when only 16 (of the 450) MPs voted for his resignation.[20][21]