The Primus pilus was the senior centurion of a Roman legion. 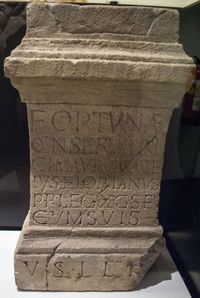 Altar dedicated to Fortuna Conservatrix by Marco Aurelio Cocceius Floriano, who was Primus Pilus of the Legio X Gemina the time of Severus Alexander in Vindobona.

In the late Roman republic, the cohort (of which there were between six and ten) became the basic tactical unit of the legions. The cohort was composed of five to eight centuries, each led by a centurion assisted by an optio, a soldier who could read and write. The senior centurion of the legion and commander of the first cohort was called the primus pilus, a career soldier and advisor to the legate. While every normal cohort was composed of five to eight centuries (normally six in secondus to decius cohorts), the one that was led by the primus pilus (the first) had about ten centuries, or 800 men. It also had a number of other staff, such as cooks, clerks, etc.; that is, non-combatants.

Contrarily to a common misconception, the literal translation of "primus pilus" is not "first spear", after the roman word pilum.[1][2] If it was so, the rank would be called "primus pilum" (nominative case, 2nd declension, neuter), while the correct term "primus pilus" (nominative case, 2nd declension, masculine) refers to the alternate traditional name for a Triarii maniple.[3] As such the "Centurio Primus Pilus" literally translate as the Centurion of the First Triarii Maniple.