Prince Andrew of Greece and Denmark

Prince Andrew of Greece and Denmark (Andreas; 2 February 1882 (N.S.) – 3 December 1944) of the House of Schleswig-Holstein-Sonderburg-Glücksburg, was the seventh child and fourth son of King George I of Greece and Olga Constantinovna of Russia. He was a grandson of Christian IX of Denmark and father of Prince Philip, Duke of Edinburgh.

He began military training at an early age, and was commissioned as an officer in the Greek army. His command positions were real appointments rather than honorary, and he saw service in the Balkan Wars. In 1913, his father was assassinated and Andrew's elder brother, Constantine, became king. Dissatisfaction with his brother's neutrality policy during World War I led to his brother's abdication and most of the royal family, including Andrew, was exiled. On their return a few years later, Andrew saw service in the Greco-Turkish War (1919–1922), but the war went badly for Greece, and Andrew was blamed, in part, for the loss of Greek territory. He was exiled for a second time in 1922, and spent most of the rest of his life in France.

By 1930, he was estranged from his wife, Princess Alice of Battenberg. His only son, Prince Philip, served in the British navy during World War II, while all four of his daughters were married to Germans, three of whom had Nazi connections. Separated from his wife and son by the effects of the war, Andrew died in Monte Carlo in 1944. He had seen neither of them since 1939.

Prince Andrew was born in Athens in 1882, the fourth son of George I of Greece. He was taught English by his caretakers as he grew up, but in conversations with his parents he refused to speak anything but Greek.[1] He also spoke German, Danish, Russian, and French.[2] He attended cadet school and staff college at Athens,[3] and was given additional private tuition in military subjects by Panagiotis Danglis.[4] Despite his short-sightedness,[5] Andrew joined the army as a cavalry officer in May 1901.[6]

In 1902, Prince Andrew met Princess Alice of Battenberg at the coronation of her grand-uncle and his aunt's husband, King Edward VII, in London. Princess Alice was a daughter of Prince Louis of Battenberg and Princess Victoria of Hesse and by Rhine. They fell in love, and the following year, on 6 October 1903, Andrew married Alice in a civil wedding at Darmstadt.[7] The following day two religious wedding services were performed: one Lutheran in the Evangelical Castle Church, and another Greek Orthodox in the Russian Chapel on the Mathildenhöhe.[8]

Prince and Princess Andrew had five children, all of whom later had children of their own. 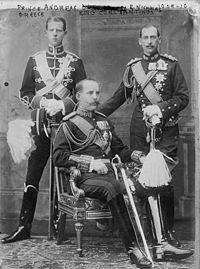 In 1909, the political situation in Greece led to a coup d'état, as the Athens government refused to support the Cretan parliament, which had called for the union of Crete (still nominally part of the Ottoman Empire) with the Greek mainland. A group of dissatisfied officers formed a Greek nationalist Military League that eventually led to Prince Andrew's resignation from the army and the rise to power of Eleftherios Venizelos.[9]

A few years later, at the outbreak of the Balkan Wars in 1912, Andrew was reinstated in the army as a lieutenant colonel in the 3rd Cavalry Regiment,[10] and placed in command of a field hospital.[11] During the war, his father was assassinated and Andrew inherited a villa on the island of Corfu, Mon Repos. In 1914, Andrew (like many European princes) held honorary military posts in both the German and Russian empires, as well as Prussian, Russian, Danish and Italian knighthoods.[12]

During World War I, he continued to visit Britain, despite veiled accusations in the British House of Commons that he was a German agent.[13] His brother, King Constantine, followed a neutrality policy, but the democratically elected government of Venizelos supported the Allies. By June 1917, the King's neutrality policy had become so untenable that he abdicated and the Greek royal family were forced into exile. For the next few years, most of the Greek royal family lived in Switzerland.[14]

For three years, Constantine's second son, Alexander, was king of Greece, until his early death from the after effects of a monkey bite. Constantine was restored to the throne, and Andrew was once again reinstated in the army, this time as a major-general.[15] The family took up residence at Mon Repos.

Andrew was given command of the II Army Corps during the Battle of the Sakarya, which effectively stalemated the Greco-Turkish War (1919–1922). Andrew had little respect for his superior officers, whom he considered incompetent.[16] On 19 September 1921, Andrew was ordered to attack the Turkish positions, which he considered a desperate move little short "of ill-concealed panic".[17] Refusing to put his men in undue danger, Andrew followed his own battle plan, much to the dismay of the commanding general, Anastasios Papoulas.[18] Relieved of his Chief of Staff, and given a dressing-down by Papoulas, Andrew offered to resign his command but Papoulas refused. The Turks attacked and Andrew's Greek troops were forced to retreat. Andrew was placed on leave for two months, until he was transferred to the Supreme Army Council. In March 1922, he was appointed as commander of the V Army Corps in Epirus and the Ionian Islands. Papoulas was replaced by General Georgios Hatzianestis.[19]

Dissatisfaction with the progress of the war led to the 11 September 1922 Revolution, during which Prince Andrew was arrested, court-martialled and found guilty of "disobeying an order" and "acting on his own initiative" during the battle the previous year. Many defendants in the treason trials that followed the coup were shot, including Hatzianestis and five senior politicians.[20] British diplomats assumed that Andrew was also in mortal danger. Andrew, though spared, was banished for life and his family fled into exile aboard a British cruiser, HMS Calypso.[21] The family settled in a small house loaned to them by Andrew's wealthy sister-in-law, Princess George of Greece, at Saint-Cloud on the outskirts of Paris.[22]

In 1930, Andrew published a book entitled Towards Disaster: The Greek Army in Asia Minor in 1921, in which he defended his actions during the Battle of the Sakarya, but he essentially lived a life of enforced retirement, despite only being in his forties.[23] During their time in exile the family became more and more dispersed. Alice suffered a nervous breakdown and was institutionalized in Switzerland. Their daughters married and settled in Germany, separated from Andrew, and Philip was sent to school in England, where he was brought up by his mother's British relatives. Andrew went to live in the South of France.[24]

On the French Riviera, Andrew lived in a small apartment, or hotel rooms, or on board a yacht with his lady friend, Countess Andrée de La Bigne.[25] His marriage to Alice was effectively over, and after her recovery and release, she returned to Greece. In 1936, his sentence of exile was quashed by emergency laws, which also restored land and annuities to the King.[26] Andrew returned to Greece for a brief visit that May.[27] The following year, his daughter Cécile, son-in-law and two of his grandchildren were killed in an air accident at Ostend; he met Alice for the first time in six years at the funeral, which was also attended by Hermann Göring.[28]

At the start of World War II, he found himself essentially trapped in Vichy France, while his son, Prince Philip, fought on the side of the British. They were unable to see or even correspond with one another. Two of Andrew's surviving sons-in-law fought on the German side: Prince Christoph of Hesse was a member of the Nazi Party and the Waffen-SS, and Berthold, Margrave of Baden, was invalided out of the German army in 1940 after an injury in France.[29] For five years, Andrew saw neither his wife nor his son. He died in the Metropole Hotel, Monte Carlo, Monaco of heart failure and arterial sclerosis just as the war was ending.[1]

Andrew was at first buried in the Russian Orthodox church in Nice, but in 1946 his remains were transferred, by Greek cruiser, to the royal cemetery at Tatoi Palace, near Athens.[30]