From Infogalactic: the planetary knowledge core
Jump to: navigation, search
For other Swedish princes with the name Carl, see Carl of Sweden (disambiguation).

Prince Carl Philip of Sweden, Duke of Värmland (Swedish pronunciation: [ˈkʰɑːɭ ˈfiːliːp]; Carl Philip Edmund Bertil; born 13 May 1979), is a Swedish prince and the only son and the second of three children of King Carl XVI Gustaf and Queen Silvia of Sweden. As of 2016[update], Prince Carl Philip is fourth in the line of succession, after his older sister, Crown Princess Victoria, his niece and goddaughter Princess Estelle, and his nephew Prince Oscar. He lives with his wife, Princess Sofia and their son, Prince Alexander, in Drottningholm Palace.

Born Crown Prince of Sweden in the Royal Palace of Stockholm, Sweden,[1] Prince Carl Philip was heir apparent to the throne of Sweden for seven months, until 1 January 1980. On that date, the law came into effect which made natural birth order the basis for succession to the throne, replacing the principle of agnatic primogeniture. Prince Carl Philip was thereby deprived of his position as first in line to the throne, which was bestowed upon his elder sister Victoria, with Carl Philip becoming second in line instead.

Prince Carl Philip was christened at the Royal Chapel on 31 August 1979. His godparents are Prince Bertil, Duke of Halland (paternal great-uncle), Princess Birgitta of Sweden (paternal aunt), Prince Leopold of Bavaria and Queen Margrethe II of Denmark (his father's first cousin).[1] His mother is of half German and half Brazilian descent.

During 1984–1986, Prince Carl Philip attended the Västerled parish preschool. In the autumn of 1986, he started school at Smedslättsskolan in Bromma which he attended at junior level.[1] For the intermediate level, the Prince attended Ålstensskolan in Bromma, proceeding from there, in the autumn of 1992, to senior level at Enskilda Gymnasiet in Stockholm.[1] In the autumn of 1994 Prince Carl Philip enrolled at Kent School. The Prince then continued his studies in a science programme at Lundsbergs upper secondary school.[1] He graduated in the spring of 1999. In 2007-2008, he studied graphic design at the Rhode Island School of Design for one year.[2][3] In 2011, Prince Carl Philip finished his studies in Agricultural and Rural Management at the Swedish University of Agricultural Sciences in Alnarp.[4] 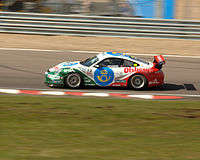 A member of the House of Bernadotte, Prince Carl Philip undertakes royal duties on behalf of his father, King Carl XVI Gustaf. He has acted as royal representative in the absence of his father and his older sister, Crown Princess Victoria.

Prince Carl Philip has been a scout and is fond of outdoor life. He is keen on sport and athletics, especially football, swimming, sailing and skiing. In 2003, he completed the historic Swedish "Vasaloppet", the longest cross country ski race in the world. Carl Philip also enjoys car racing, a passion he inherited from his great-uncle and godfather, Prince Bertil, and has a licence to compete. Prince Carl Philip has taken part in the racing series Porsche Carrera Cup Scandinavia in a Porsche 911 GT3. Since 2013 he has raced in the Scandinavian Touring Car Championship.

The Prince completed his military service at the Amphibious Battalion at Vaxholm's Coast Artillery Regiment as a combat boat commander (Combat Boat 90) in the autumn of 2000. In December 2002, the Prince was promoted to fänrik (midshipman), and in 2004 to the rank of löjtnant (sub-lieutenant) in the Swedish Navy. In 2007 and 2008 he went to the Swedish National Defense College. The course was divided in three weeks autumn 2007 and three weeks spring 2008. After that course he was appointed kapten in the Swedish Navy (lieutenant). On 1 October 2014, Prince Carl Philip achieved the rank of major.

With a great interest for design and drawing, the Prince began studying graphic design in Stockholm in 2003, studies which he continues still. In December 2003, for Queen Silvia's 60th birthday, he designed the cover for a CD of the music of Tchaikovsky's ballet The Nutcracker, which was released to honour Her Majesty's landmark birthday (the proceeds from it goes to the World Childhood Foundation, an organisation founded by Queen Silvia). In 2004, the Prince created a calendar, together with an advertising agency, that was sold to benefit the same organisation. 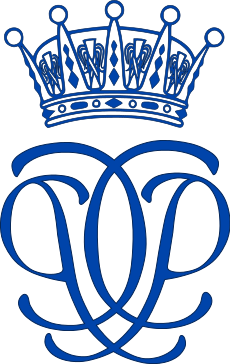 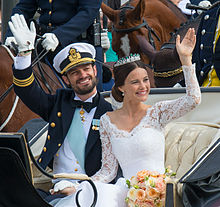 Prince Carl Philip dated Emma Pernald from 1999.[5] Pernald worked at a PR firm for several years. However, the prince and Pernald broke off their relationship in March 2009. She revealed in the Swedish newspaper Expressen that she and the prince mutually decided to go their separate ways. Pernald made no further comment as to the reason for the break-up.

In April 2010, Carl Philip was linked in the press with former semi-nude glamour model Sofia Hellqvist.[6][7] In August 2010, Royal Court spokesperson, Nina Eldh, confirmed the relationship between Carl Philip and Hellqvist in a statement released by the palace.[8] On 27 June 2014, it was announced that Carl Philip was engaged to Sofia Hellqvist. They married on 13 June 2015 in the Stockholm's Royal Palace chapel, where thousands of people lined the street for the occasion.[6][9][10] In an interview he criticized the press for suggesting that Sofia Hellqvist was not welcome in the royal family. He told the press that the opposite was true and that his family easily accepted her into the family. He compared the "bullying" of her past to that of himself being bullied for having dyslexia.[11] On 15 October 2015 it was announced that the couple is expecting their first child, due in April 2016.[12][13] 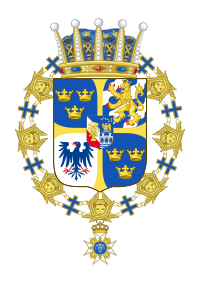