Prince Frederick Charles Alexander of Prussia (German: Prinz Carl von Preußen) (29 June 1801 – 21 January 1883) born in Charlottenburg, was a younger son of Frederick William III of Prussia and Louise of Mecklenburg-Strelitz. Although he served as a Prussian general for much of his adult life, Prince Charles is often remembered for his vast patronage and collections of art and armor and as the first Herrenmeister (Grand Master) of the Order of Saint John after its restoration as a chivalric order.[1] 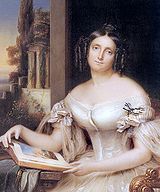 The family lived in Wilhelmstrasse, opposite the residence of German Chancellor Otto von Bismarck.[3] In possession of great wealth and a great art collector, their palace contained many art treasures.[1] Charles was also a collector of rare weaponry, and carefully acquired and preserved knives, swords, daggers, rifles, pistols, and revolvers from many different countries and time periods.[3] As a result of his vast collection, one source stated his palace was "one of the most famous repositories of bric-a-brac in Europe...his collection of arms and armor is believed to know no rival save in the great State armories at Turin and Vienna".[1] It was said that Charles bore little resemblance to his Hohenzollern cousins, possessing a narrow and colorless face and gray hair along with a stooping posture.[3]

In 1830, he commanded the 2nd Guards Division. He was further promoted to lieutenant-general in 1832 and general of infantry in 1844. He served as Inspector-General (1848) and as Generalfeldzeugmeister and chief of the artillery (1854). Charles served as Governor of Mainz from 1864–1866. In 1852, he became Herrenmeister of the Order of Saint John (Bailiwick of Brandenburg).

In 1882, Prince Charles' foot slipped while he was getting up from dinner, and consequently he fractured his left thighbone.[1] As he had already been in delicate health from his advanced age, sources reported that survival was unlikely.[1] He died the following year, on 21 January 1883, in Berlin. His last words were "Long live the Emperor."[2] At the time of his death, he was the only surviving brother of Emperor Wilhelm I. His death disrupted plans for celebration of the silver wedding anniversary of his nephew, Crown Prince Frederick, as well as plans for a visit from the Prince and Princess of Wales to Berlin.[1][2]