Prince Christopher of Greece and Denmark

Prince Christopher of Greece and Denmark (10 August 1888 – 21 January 1940) was the youngest son and last child of King George I of Greece, belonging to a dynasty which mounted and lost the throne of Greece several times during his lifetime. Much of his life was spent living abroad.

He was born at Pavlovsk, Imperial Russia, son of George I of Greece and his queen, Olga, a Russian grand duchess by birth.[1][2] He was the youngest of their eight children, being twenty years younger than their oldest child, Constantine. He was called "Christo" in the family. His older brothers were future King Constantine I, George, Nicholas and Andrew. His nephew Philip, son of his brother Andrew, married into the British royal family. Upon his marriage, he and his wife, King George VI's older daughter Elizabeth, were respectively titled The Duke of Edinburgh and Princess Elizabeth, Duchess of Edinburgh.[3]

Christopher, like his siblings, was a polyglot, speaking Greek, English, Danish, Russian, French and Italian. The siblings spoke Greek to one another, and used English with their parents. The parents, however, spoke German to each other.

The Greek royal family maintained close relations with the Danish royal family, to which they also officially belonged. The Hellenic royal line was a cadet branch of the Schleswig-Holstein-Sonderburg-Glücksburg dynasty which had mounted the throne of Denmark in 1863.[4]

When Christopher came of age he joined the Hellenic Navy, although apparently he would rather have studied the piano. While a young man, he was apparently offered no fewer than three different thrones - those of Portugal,[5] Lithuania, and Albania - but he declined them all, as he did not wish the stress of royal duties.[citation needed]

He was briefly engaged to Princess Alexandra, Duchess of Fife in about 1910[citation needed] (Alexandra's mother, Princess Louise, Duchess of Fife, was a daughter of King Edward VII and Queen Alexandra of the United Kingdom, herself an older sister of George I of Greece, Christopher's father). The engagement was terminated when disapproving parents learned of the liaison. 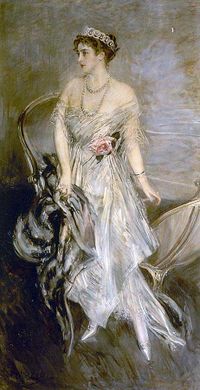 Princess Anastasia of Greece and Denmark, the former Nancy Leeds, by Giovanni Boldini 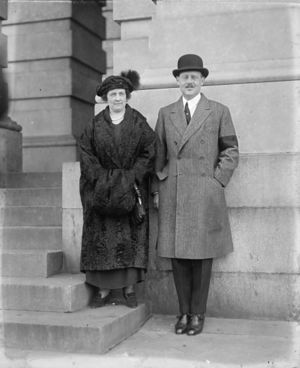 On 1 January 1920, Christopher married a very wealthy American widow, Nonnie May "Nancy" Stewart Worthington Leeds, at Vevey, Switzerland.[1][2][6] His bride, a once-divorced and once-widowed commoner at least a decade older than the prince, was nonetheless recognised as Christopher's dynastic wife by his family[2] (at the time of the engagement and wedding, the Greek royal family lived frugally in exile, and as Christopher was last in the dynasty's order of succession, any children he fathered would not impact the succession rights of other Greek dynasts). Her fortune, estimated in the tens of millions of dollars, was inherited from her second husband, a tin millionaire,[1] and substantially eased the Greek royal family's exile during the 1920s. The wedding followed a six-year engagement while the royal court-in-exile negotiated the terms and arrangements of the marriage.

Shortly after their marriage, Princess Anastasia developed cancer, and died in London on 29 August 1923, leaving no children from this marriage.[1][2] Prince Christopher did, however, have a stepson, William Bateman Leeds Jr (1902–1971), who had, in 1921, married Princess Xenia Georgievna Romanova of Russia.[1] She was Christopher's niece through his elder sister, Marie of Greece, Grand Duchess George of Russia.

The couple were married in 1929 in Palermo, Italy; the civil ceremony was on 10 February, and the religious one on 11 February.[1][2] They were childless for a decade, then one child was born to Françoise: Prince Michael of Greece and Denmark was born in Rome in 1939, shortly before Prince Christopher's death.[1][2]

In 1927, Prince Christopher paid a visit to the Long Island home of William and Xenia Leeds, who were his step-son and niece, respectively. Xenia had taken an interest in the strange case of a woman, Anna Anderson, who claimed to be Grand Duchess Anastasia Nikolaevna of Russia, youngest daughter of the last Tsar of Russia, Nicholas II.

As Prince Christopher explained, "That was her story, and, fantastic as it was, there were many who believed then − and still believe − in her, among them one or two members of the Imperial Family."[7] He went on, "Dozens of people who had known the Grand Duchess Anastasia were brought to see the girl in the hope that they might be able to identify her, but none of them could come to any definite conclusion."[7] Prince Christopher described her, "In the first place she was unable to speak Russian, which the Grand Duchess Anastasia, like all the Czar's children, had talked fluently − and would only converse in German."[7]

Summing up, he said of her, "The poor girl was a pathetic figure in her loneliness and ill health, and it was comprehensible enough that many of those around her let their sympathy over-rule their logic... She was unable to recognise people whom the Grand Duchess Anastasia had known intimately, and her descriptions of rooms in the different palaces and of other scenes familiar to any of the Imperial Family were often inaccurate."[7]

Prince Christopher recorded his thoughts on monarchy and those aspiring to it: "Nothing under the sun would induce me to accept a Kingdom. A crown is too heavy a thing to be put on lightly. It has to be worn by those born to that destiny, but that any man should willingly take on the responsibility, not being constrained by duty to do so, passes my comprehension." [8]