Prince Edward, Duke of Kent, KG, GCMG, GCVO, ADC(P) (Edward George Nicholas Paul Patrick; born 9 October 1935) is a grandchild of King George V and Queen Mary. He has held the title of Duke of Kent since 1942.

The Duke of Kent carries out royal duties on behalf of his first cousin, Elizabeth II. He is perhaps best known as President of the All England Lawn Tennis and Croquet Club, presenting the trophies to the Wimbledon champion and runner-up. He also served as the United Kingdom's Special Representative for International Trade and Investment, retiring in 2001. He is also the President of the Scout Association, the Royal United Services Institute, and the Royal Institution of Great Britain, and since 1967 Grand Master of the United Grand Lodge of England. The Duke of Kent is also Patron of the IAM (Institute of Advanced Motorists) an independent road safety charity which specialises in training and advice for post-licence drivers and riders.

At the time of his birth, Prince Edward was seventh in the line of succession to the throne of his grandfather King George V, behind the Prince of Wales, the Duke of York, his cousins Elizabeth and Margaret, his uncle, the Duke of Gloucester, and his father. As of the birth of the Duke of Cambridge's second child, the Queen's fifth great-grandchild, on 2 May 2015, the Duke of Kent was 34th in line. As of the death of the 7th Earl of Harewood in 2011, he became the Queen's oldest living paternal cousin, although he is nine years younger than the Queen herself.

Prince Edward was born on 9 October 1935, at No. 3 Belgrave Square, London.[1] Home Secretary Sir John Simon was present to verify the birth. The prince's father was Prince George, Duke of Kent, the fourth son of George V and Mary of Teck. His mother was Princess Marina, Duchess of Kent (née Princess Marina of Greece and Denmark), the daughter of Prince Nicholas of Greece and Denmark, and Grand Duchess Yelena Vladimirovna of Russia. As a grandson of a British sovereign in the male line, he was styled as a Prince of the United Kingdom of Great Britain and Northern Ireland, His Royal Highness Prince Edward of Kent.

The Prince was baptised in the Private Chapel of Buckingham Palace on 20 November 1935 by the Archbishop of Canterbury Cosmo Lang. His godparents were King George V and Queen Mary (his paternal grandparents); the Prince of Wales (his paternal uncle); the Princess Royal, Countess of Harewood (his paternal aunt); the Duke of Connaught and Strathearn (his great-great-uncle, whose son, Prince Arthur of Connaught, stood proxy); the Duchess of Argyll (his great-great-aunt); and Prince Nicholas of Greece and Denmark (his maternal grandfather).[2]

Prince Edward began his schooling at Ludgrove, a preparatory school in Berkshire, before going on to Eton College and then Le Rosey in Switzerland. After school he entered the Royal Military Academy Sandhurst where he won the Sir James Moncrieff Grierson prize for foreign languages.

On 25 August 1942, Prince Edward's father, the Duke of Kent, was killed when his plane crashed in bad weather in Caithness. Prince Edward, who was almost 7, succeeded his father as Duke of Kent,[3] Earl of St Andrews and Baron Downpatrick. He later took his seat in the House of Lords in 1959.

As a member of the royal family, he began performing royal duties at an early age. At the age of 16, he walked behind the coffin of his uncle, George VI, at his state funeral in 1952. In 1953, he attended the coronation of his cousin, Elizabeth II, paying homage at her throne after her crowning (following the Dukes of Edinburgh and Gloucester).

The Duke of Kent graduated from the Royal Military Academy Sandhurst on 29 July 1955 as a Second Lieutenant in the Royal Scots Greys,[4] the beginning of a military career that would last over 20 years. He was promoted to captain on 29 July 1961.[5] The Duke of Kent saw service in Hong Kong from 1962–63 and later served on the staff in Eastern Command. He was promoted to Major on 31 December 1967.[6] Later in 1970, the Duke commanded a squadron of his regiment serving in the British Sovereign Base Area in Cyprus, part of the UN force enforcing peace between the Greek and Turkish halves of the island. He was promoted to Lieutenant-Colonel on 30 June 1973.[7] The Duke retired from the Army on 15 April 1976.[8] He was subsequently promoted Major-General on 11 June 1983[9] and Field Marshal on 11 June 1993.[10] 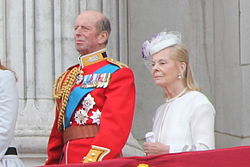 The Duke and Duchess of Kent on the balcony of Buckingham Palace at the 2013 Trooping the Colour.

The Duke of Kent married Katharine Worsley at York Minster on 8 June 1961. Katharine is the only daughter of Sir William Arthrington Worsley, 4th Bt., and his wife, Joyce Morgan Brunner. After their wedding, she was styled Her Royal Highness The Duchess of Kent, though in 2002, she ceased to use the style of Royal Highness and has expressed a preference to be known as Katharine, Duchess of Kent, the latter the typical style of a divorced or widowed peeress, which she is not[citation needed]. However she remains legally HRH The Duchess of Kent.

The Duke and Duchess of Kent have three living children, none of whom carries out royal duties:

The Duchess of Kent converted to Catholicism in 1994.[11] Because this conversion did not occur until many years after their marriage, it did not cause the Duke to lose his place in the line of succession, as the Act of Settlement 1701 only applies where the spouse is a Catholic at the time of marriage.[citation needed] The couple's son Lord Nicholas also converted to Catholicism following his mother's example.

The Duke and Duchess of Kent reside at Wren House, Kensington Palace, in London.[12]

The Duke of Kent has performed royal duties on behalf of his cousin, the Queen, for over 50 years. The Duke has represented the Queen during independence celebrations in the former British colonies of Sierra Leone, Uganda, Guyana, Gambia and most recently Ghana, for its 50th independence anniversary celebration. He has also acted as Counsellor of State during periods of the Queen's absence abroad.

One of the Duke's major public roles for many years was Vice-Chairman of British Trade International, and later as the United Kingdom's Special Representative for International Trade and Investment. This position saw the Duke travel abroad to represent the British government in fostering trade relations with foreign countries and organisations.

He also serves as the president of the Wimbledon All England Lawn Tennis and Croquet Club, a position he succeeded from his late mother, Princess Marina, Duchess of Kent. His other roles include President of the Commonwealth War Graves Commission, the RAF Benevolent Fund, the Royal National Lifeboat Institution, the Stroke Association, RUSI, the Royal Institution, and patron of St Mungo's Broadway, benefiting the homeless. He also makes the final decision in the award of the Mountbatten Medal.

For almost 29 years, the Duke has been the patron of Endeavour, a national youth organisation. He has also served as Royal Bencher of The Honourable Society of Lincoln's Inn since 2001, a position previously occupied by his father.

On 16 December 1963, the Duke was initiated into Royal Alpha Lodge No. 16 and into Freemasonry.[13] He is the 10th Grand Master of the United Grand Lodge of England, the governing body of Freemasonry in England and Wales. He has served in that office since 1967, thus being the longest serving Grand Master.[14] In December 2013, he celebrated 50 years as a freemason.[13]

The Duke has served as the President of The Scout Association since 1975.[15] Along with Prince William, Duke of Cambridge, visited the Centenary World Scout Jamboree at Hylands Park, Chelmsford in July 2007.[16]

The Duke of Kent is patron of a number of organisations active in the fields of charity, health and the arts. These include:

The Duke's current full style is Field Marshal His Royal Highness Prince Edward George Nicholas Paul Patrick, Duke of Kent, Earl of Saint Andrews and Baron Downpatrick, Royal Knight of the Most Noble Order of the Garter, Grand Master and Knight Grand Cross of the Most Distinguished Order of Saint Michael and Saint George, Knight Grand Cross of the Royal Victorian Order, Personal Aide-de-Camp to Her Majesty.