Prince Edward, Duke of York and Albany KG PC FRS (Edward Augustus;[1] 25 March 1739 – 17 September 1767), was the younger brother of George III of the United Kingdom, the second son of Frederick, Prince of Wales, and Princess Augusta of Saxe-Gotha. 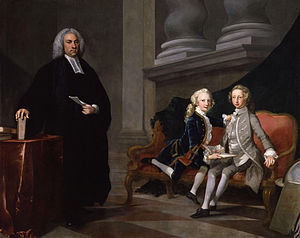 The Duke of York (centre), together with his brother, the future George III of the United Kingdom and their tutor, Francis Ayscough, Dean of Bristol, ca. 1749.

The young prince was baptised Edward Augustus, at Norfolk House, by The Bishop of Oxford, Thomas Secker, and his godparents were his great-uncle The King in Prussia (for whom The Duke of Queensberry stood proxy), The Duke of Brunswick-Wolfenbüttel (who was represented by Lord Carnarvon), and his maternal aunt The Duchess of Saxe-Weissenfels (for whom Lady Charlotte Edwin, a daughter of the late 4th Duke of Hamilton, stood proxy).[2]

As a boy the Duke of York, with his brother, went through long hours of schooling in arithmetic, Latin, geometry, writing, religion, French, German, Greek and even dancing to be well rounded. For the future George III the young Prince Edward, Duke of York, was his only constant companion but it was Edward who was their mother’s favorite. As he grew up, quite unlike his simple and solitary brother, the Duke of York became a very popular figure in London society. Those who knew the Duke of York described him as silly, frivolous, rather a chatter-box, someone who loved a good practical joke and who did not keep the most upright company.[3] 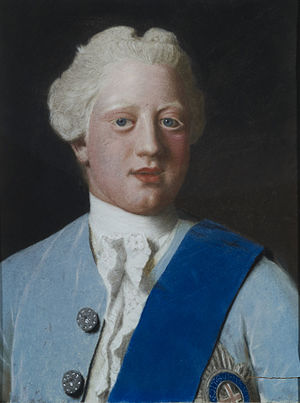 The Duke of York, aged 15, by Liotard

Edward showed an interest in naval affairs and sought permission to serve with the Royal Navy. He participated in the naval descents against the French coast taking part in the failed Raid on St Malo, which ended in the Battle of St. Cast in 1758. 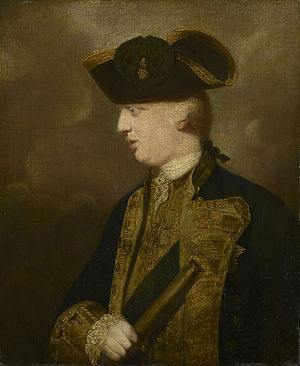 The Duke of York, 1763, as painted by Sir Joshua Reynolds.

He was created Duke of York and Albany and Earl of Ulster by his paternal grandfather, George II, on 1 April 1760.[6]

When Edward's brother ascended the throne on 25 October 1760 as George III, he named Edward a privy counsellor.

From the time his brother became king and until the birth of the king's first child, the future George IV, on 12 August 1762, the duke was heir presumptive to the British throne.

In the late summer of 1767, on his way to Genoa, Edward fell ill and had to be landed in the harbour of Monaco. Despite the care and attention he was given, he died in the Palace of Honoré III, Prince of Monaco, on 17 September. The state bedchamber where the ill duke died has since been known as the York Room. After his death, his body was returned to London aboard HMS Montreal, and is interred in Westminster Abbey.[8] 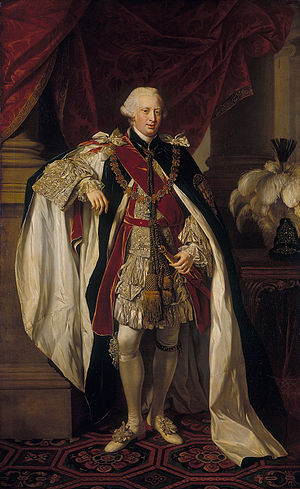 PERMIT me to take this method of thanking your Royal Highness, for condescending to like the following Sketch. Or, in other Words, permit me to let the World know that this ſame Cub has been laughed at by the Duke of YORK;---- has been read to your Royal Highness by the Genius himself, and warmed by the immediate beams of your kind Indulgence.

HAD I been able to conceal this, I should have imagined that I had not the least Spark of the Enthusiasm of Parnassus in my Composition.---- To be so deficient in Vanity, which, if I am not mistaken, may be reckoned an inseparable Characteristic of a Poet.

THIS Trifle, SIR, would not presume to interrupt you, when engaged in matters of Consequence. It only begs leave to pay it's Respects in an hour devoted to cheerful Festivity.

I wish your Royal Highness a long, a merry, and a happy Life; and am, 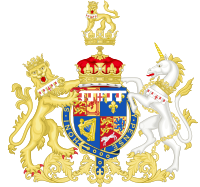 Coat of arms of the Prince Edward, the Duke of York and Albany

Edward was granted use of the arms of the kingdom, differenced by a label argent of five points, the centre bearing a cross gules, the other points each bearing a canton gules.[10]

Template:Dukes of York and Albany