From Infogalactic: the planetary knowledge core
Jump to: navigation, search
Not to be confused with Prince George of Cambridge.

Prince George, Duke of Kent, KG, KT, GCMG, GCVO (George Edward Alexander Edmund; 20 December 1902 – 25 August 1942) was a member of the British Royal Family, the fourth son and fifth child of King George V and Queen Mary, and younger brother of Kings Edward VIII and George VI. He held the title of Duke of Kent from 1934 until his death in a military air-crash on 25 August 1942.

Prince George was born on 20 December 1902 at York Cottage on the Sandringham Estate in Norfolk, England.[1] His father was George, Prince of Wales (later King George V), the eldest surviving son of King Edward VII and Queen Alexandra. His mother was the Princess of Wales (later Queen Mary), the daughter of the Duke and Duchess of Teck.[2] At the time of his birth, he was fifth in the line of succession to the throne, behind his father and three older brothers. As a grandchild of a British monarch in the male line, he was styled His Royal Highness Prince George of Wales.

George was baptised in the Private Chapel at Windsor Castle on 26 January 1903 by Francis Paget, Bishop of Oxford. Unlike many previous royal baptisms, George was christened using local water, rather than water from the River Jordan.[3]

Prince George received his early education from a tutor and then followed his elder brother, Prince Henry (later the Duke of Gloucester), to St Peter's Court, a preparatory school at Broadstairs, Kent. At the age of thirteen, like his brothers, the Prince of Wales (later King Edward VIII) and Prince Albert (later King George VI), before him, he went to naval college, first at Osborne and, later, at Dartmouth.[1] He remained in the Royal Navy until March 1929, serving on HMS Iron Duke and later HMS Nelson.[1] After leaving the navy, he briefly held posts at the Foreign Office and later the Home Office, becoming the first member of the royal family to work as a civil servant.[1]

From January to April 1931 Prince George and his elder brother the Prince of Wales travelled 18,000 miles on a tour of South America. Their outward voyage was on the ocean liner Oropesa.[4] In Buenos Aires they opened a British Empire Exhibition.[5] They continued from the River Plate to Rio de Janeiro on the liner Alcantara and returned from Brazil to Europe on the liner Arlanza, landing at Lisbon.[6] The princes returned via Paris and an Imperial Airways flight from Paris–Le Bourget Airport that landed specially in Windsor Great Park.[7][8]

In October 1938 George was appointed Governor General of Australia in succession to Lord Gowrie with effect from November 1939.[9][10] On 11 September 1939 it was announced that, owing to the outbreak of the Second World War, the appointment was postponed.[11]

At the start of the Second World War, George returned to active military service in the rank of Rear Admiral, briefly serving on the Intelligence Division of the Admiralty. In April 1940, he transferred to the Royal Air Force. He temporarily relinquished his rank as Air Vice-Marshal (the equivalent of Rear Admiral) to assume the post of Staff Officer at RAF Training Command in the rank of Group Captain. 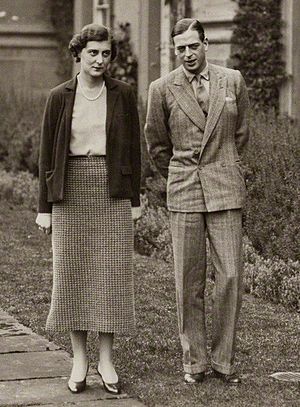 On 12 October 1934, in anticipation of his forthcoming marriage to his second cousin Princess Marina of Greece and Denmark he was created Duke of Kent, Earl of St Andrews, and Baron Downpatrick.[2][12][13] The couple married on 29 November 1934 at Westminster Abbey.[14] The bride was a daughter of Prince Nicholas of Greece and Denmark and a great-niece of Queen Alexandra.

Princess Marina became known as HRH The Duchess of Kent following the marriage. She and her husband had three children:

Both before and after his marriage, Prince George had a string of affairs with both men and women, from socialites to Hollywood celebrities. The better known of his lovers included banking heiress Poppy Baring, socialite Margaret Whigham (later Duchess of Argyll and involved in a notoriously scandalous divorce case), and Barbara Cartland (who believed him to be the father of her daughter Raine McCorquodale).[15] There were "strong rumours" that he had affairs with musical star Jessie Matthews[16] and Noël Coward,[17] a relationship which Coward's long-term boyfriend, Graham Payn, denied.[18] The security services "reported that Coward and Kent had been seen parading together through the streets of London, dressed and made up as women, and had once been arrested by the police for suspected prostitution".[19]

The Duke of Kent is rumoured to have been addicted to drugs, especially morphine and cocaine, a rumour which reputedly originated with his friendship with Kiki Preston,[20][21][22] whom he first met in the mid-1920s. Reportedly, Prince George shared Kiki in a ménage à trois with Jorge Ferrara, the bisexual son of the Argentinian ambassador to Britain.[23] Other alleged sexual liaisons were with the art historian and Soviet spy Anthony Blunt and maharani of Cooch Behar, Indira Raje.[16]

In his attempt to rescue his cocaine-addicted brother from the influence of Kiki, Edward VIII attempted for a while to persuade both George and Kiki to break off their contact, to no avail.[24] Eventually, Edward forced George to stop seeing Kiki and also forced Kiki to leave England, while she was visiting George there in the summer of 1929.[25] For years afterwards, Edward feared that George might relapse to drugs if he maintained his contact with Kiki. Indeed, in 1932, Prince George ran into Kiki unexpectedly at Cannes and had to be removed almost by force.[26]

It has been alleged for years that American publishing executive Michael Temple Canfield (1926–1969) was the illegitimate son of Prince George and Kiki Preston. According to various sources, both Prince George's brother, the Duke of Windsor and Laura, Duchess of Marlborough, Canfield's second wife, shared this belief.[27][28][29][30] Canfield was the adopted son of Cass Canfield, American publisher of Harper and Row.[31]

Early on the duke came to the opinion that the future lay in aviation. It became his passion, and in 1929 the duke earned his pilot's licence. He was the first of the Royal family to cross the Atlantic by air. Prior to his flying days, he entered the Royal Navy, and was trained in intelligence work while stationed at Rosyth.[32] 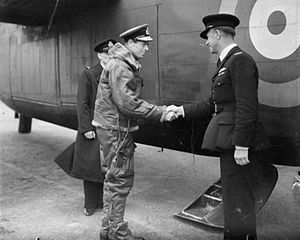 The Duke of Kent before he crossed the Atlantic by air.

In 1937, he was granted a commission in the Royal Air Force as a group captain.[33] He was also made the Honorary Air Commodore of No. 500 (County of Kent) Squadron Auxiliary Air Force.[34] Just before war broke out he became an RAF Air Vice-Marshal (approximately equal in rank to his Rear Admiral status earlier in the Royal Navy). In a characteristic gesture, he relinquished that rank in 1940 so that he would not be senior to more experienced officers, becoming a lower-ranked group captain and, in July 1941, an air commodore in the Welfare Section of the RAF Inspector General's Staff.[citation needed] In this role he went on official visits to RAF bases to help boost wartime morale.[35] His death while in the service of the RAF marked the first time in 500 years that a member of the Royal family died on active service. [36]

Prince George died on 25 August 1942, at the age of 39, along with fourteen others, on board RAF Short Sunderland flying boat W4026, which crashed into a hillside near Dunbeath, Caithness, Scotland, while flying from Invergordon, Ross and Cromarty, to Iceland on non-operational duties.[37] Prince George had a briefcase full of 100 Kroner notes, worthless in Iceland, handcuffed to his wrist, leading to speculation the flight was a military mission to Sweden, the only place Kroner notes were of value.[38]

The Duchess of Kent gave birth to her third child, Prince Michael of Kent, seven weeks before Prince George's death. His body was transferred initially to St. George's Chapel, Windsor, and he was buried in the Royal Burial Ground, Frogmore, directly behind Queen Victoria's mausoleum. He was succeeded as Duke of Kent by his eldest son, Edward.

The Duke's early life is dramatised in Stephen Poliakoff's television serial The Lost Prince (2003), a biography of the life of the Duke's younger brother John. In the film, the teenage Prince 'Georgie' is portrayed as sensitive, intelligent, artistic and almost uniquely sympathetic to his brother's plight. He is shown as detesting his time at the Royal Naval College and as having a difficult relationship with his austere father.

Much of George's later life was outlined in the documentary film The Queen's Lost Uncle.[39] He is a recurring character in the revival of Upstairs, Downstairs (2010), played by Blake Ritson.[2] He is portrayed as a caring brother, terrified of the mistakes that his family is making; later, he is portrayed as an appeaser of the German regime, but also as a supportive friend of Hallam Holland.[2]

George and his elder brother the Prince of Wales, later King Edward VIII, are shown in Stephen Poliakoff's BBC television serial Dancing on the Edge (2013), in which they are portrayed as supporters of jazz and encouragers of Louis Lester's Jazz Band. A sexual attraction to Louis on George's part is also insinuated.[40]

At the time of his death, Prince George's full style was His Royal Highness The Prince George Edward Alexander Edmund, Duke of Kent, Earl of Saint Andrews and Baron Downpatrick, Royal Knight of the Most Noble Order of the Garter, Royal Knight of the Most Ancient and Most Noble Order of the Thistle, Knight Grand Cross of the Most Distinguished Order of Saint Michael and Saint George, Knight Grand Cross of the Royal Victorian Order. 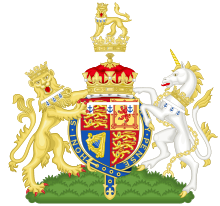 Around the time of his elder brother Prince Henry's twenty-first birthday, Prince George was granted the use of the Royal Arms, differenced by a label argent of three points, each bearing an anchor azure.