Prince Gustaf Adolf Oscar Fredrik Arthur Edmund, Duke of Västerbotten (22 April 1906 – 26 January 1947) was a Swedish prince and heir to the Swedish throne. Born in Stockholm, he was the eldest son of Prince Gustaf Adolf of Sweden (the future King Gustaf VI Adolf) and his first wife Princess Margaret of Connaught and a great-grandson of Queen Victoria. Gustaf Adolf was the father of the current king, Carl XVI Gustaf. He was known by his last given name, Edmund, in the family.

The prince was killed on 26 January 1947 in an airplane crash at Kastrup Airport, Copenhagen, Denmark. 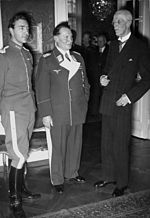 Some recent journalists and historians portray Gustaf Adolf as sympathetic towards the Nazi movement in Germany in the 1930s, a highly debated and criticised opinion.[citation needed] As an official representative of Sweden, Gustaf Adolf met with many Nazi leaders, including Adolf Hitler and Hermann Göring (the latter had lived in Sweden and had many friends among the Swedish upper class). As the prince very rarely spoke of political matters and left no written evidence of any political sympathies of any kind, the subject remains very much a matter of speculation.

These rumours however made him unpopular among many Swedes during his lifetime. The public called him tyskprinsen (the German prince).[citation needed] However, according to journalist and author Staffan Skott in his book Alla dessa Bernadottar (All these Bernadottes), letters and diary entries by influential Swedes of decidedly anti-Nazi persuasion disprove the rumors. Such documents include those of the diplomat Sven Grafström and of the wife of the cabinet minister Gustav Möller, as well as of the stepson of Hermann Göring, who said that a visit by the prince to Göring's home was a complete failure and that Göring and Gustaf Adolf did not get along well. The newspaper Expressen said that "plausible witnesses who were also strongly pro-democracy" had denied the rumors.[citation needed] The Swedish Royal Court made a statement denying any knowledge of Nazi sympathies.[citation needed]

Gustaf Adolf expressed his support for Finland during the Continuation War of 1941–1944, and would even have liked to participate as a voluntary soldier in the Winter War of 1939–1940, but the King's disapproval prevented this from happening.

Gustaf Adolf was an accomplished horse rider. He competed in show jumping at the 1936 Summer Olympics, but failed to finish. He served as president of the Swedish Olympic Committee from 1933 to 1947.[1][2]

Gustaf Adolf joined the Boy Scouts, and as an adult became a Scoutmaster. He earned his Wood Badge beads at Gilwell Park in England. When the Svenska Scoutrådet formed he served as its first president or Chief Scout. He led the Swedish contingents at the 5th World Scout Jamboree in 1937 and at the World Scout Moot in 1939. He served on the World Scout Committee from May 1937 until his death.[3][4]

Gustaf Adolf reached the substantive rank of Lieutenant Colonel during the 1940s.

Prince Gustaf Adolf was killed in an airplane crash in the afternoon of 26 January 1947 at Kastrup Airport, Copenhagen, Denmark.[5] The prince, along with two companions, was returning to Stockholm from a hunting trip and visit to Princess Juliana and Prince Bernhard of the Netherlands. The delayed KLM flight from Amsterdam had landed at Copenhagen for a routine stop before continuing to Stockholm. Soon after the Douglas DC-3 aircraft took off, it climbed to an altitude of about 50 meters (150 ft), stalled, and plummeted nose-first to the ground, where it exploded on impact. All 22 people aboard the plane (16 passengers and six crew members) were killed. Also aboard the ill-fated flight was American singer and actress Grace Moore.[5] An investigation found that, short of time, the plane's captain had failed to perform the final pre-flight check list properly and took off not realizing that a gust lock on an elevator was still in place.[6]

At the time of his death, Prince Gustaf Adolf had been second in line to the Swedish throne behind his father, the Crown Prince, who in 1950 became King Gustaf VI Adolf. The younger Gustaf Adolf was succeeded as second in line by his only son, Carl Gustaf (at the time only 9 months old), who would later succeed his grandfather in 1973 as King Carl XVI Gustaf.

The arms of Prince Gustaf Adolf were those of the Kingdom of Sweden, with a quarter with the arms of Västerbotten in base.