Prince Harald of Denmark (Harald Christian Frederik; 8 October 1876 - 30 March 1949) was a member of the Danish Royal Family. He was the fourth child and third son of Frederick VIII of Denmark and his wife, Princess Louise of Sweden and Norway, and thus brother to Christian X of Denmark.

The prince served in the Royal Danish Army for most of his life, and reached the rank of Lieutenant General. 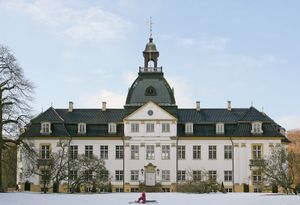 At the age of 17, Prince Harald entered a military career as was customary for princes at the time. He later served with the Guard Hussar Regiment.[1]

After their marriage, Prince Harald and Princess Helena lived at the Jægersborghus country house north of Copenhagen which Prince Harald had purchased in 1907.[1] Here their five children were born between 1910 and 1923.

Like other members of the Danish royal family, his economic situation was influenced by the failure of Den Danske Landmandsbank in 1923. Until 1935, however, he and his family were able to stay at Jægersborghus but then moved to a villa in the northern part of Copenhagen.[1]

At the age of 50, Prince Harald retired from active service with the rank of Major General. In 1933, however, his brother King Christian X appointed him Lieutenant General.

During World War II, Princess Helena became very unpopular because of her sympathy for the German occupation of Denmark and the Nazi party. Because of this, she was reportedly not on speaking terms with her sons[2]

After the war, Princess Helena was not brought to trial, being a member of the royal family who did not wish any publicity on the matter, but was exiled from Denmark 30 May 1945 and placed under house arrest at the Glücksburg Castle in Germany. She was allowed to return to Denmark in 1947, when Prince Harald fell gravely ill. She stayed with her spouse until his death two years later.[1]

Prince Harald died on 30 March 1949 in Copenhagen. He was buried at Roskilde Cathedral. Princess Helena survived her husband by 13 years and died on 30 June 1962.

Prince Harald was a Knight of the Order of the Elephant.

Harald and Helena had five children: